Bradley is one of the few basketball players who have ever been appreciatively cheered by a disinterested away-from-home crowd while warming up. This curious event occurred last March, just before Princeton eliminated the Virginia Military Institute, the years Southern Conference champion, from the NCAA championships. The game was played in Philadelphia and was the last of a tripleheader. The people there were worn out, because most of them were emotionally committed to either Villanova or Temple-two local teams that had just been involved in enervating battles with Providence and Connecticut, respectively, scrambling for a chance at the rest of the country. A group of Princeton players shooting basketballs miscellaneously in preparation for still another game hardly promised to be a high point of the evening, but Bradley, whose routine in the warmup time is a gradual crescendo of activity, is more interesting to watch before a game than most players are in play. In Philadelphia that night, what he did was, for him, anything but unusual. As he does before all games, he began by shooting set shots close to the basket, gradually moving back until he was shooting long sets from 20 feet out, and nearly all of them dropped into the net with an almost mechanical rhythm of accuracy. Then he began a series of expandingly difficult jump shots, and one jumper after another went cleanly through the basket with so few exceptions that the crowd began to murmur. Then he started to perform whirling reverse moves before another cadence of almost steadily accurate jump shots, and the murmur increased. Then he began to sweep hook shots into the air. He moved in a semicircle around the court. First with his right hand, then with his left, he tried seven of these long, graceful shots-the most difficult ones in the orthodoxy of basketball-and ambidextrously made them all. The game had not even begun, but the presumably unimpressible Philadelphians were applauding like an audience at an opera.

Common sense always speaks too late. Common sense is the guy who tells you you ought to have had your brakes relined last week before you smashed a front end this week. Common sense is the Monday morning quarterback who could have won the ball game if he had been on the team. But he never is. Hes high up in the stands with a flask on his hip. Common sense is the little man in a grey suit who never makes a mistake in addition. But its always somebody elses money hes adding up.

I've never seen a job being done by a five-hundred-person engineering team that couldn't be done better by fifty people.

Statement once told to the author, as quoted in Thomas J. Peters, Liberation Management: Necessary Disorganization for the Nanosecond Nineties (1992), 572.

Speech (7 Feb 2012) in the East Room of the White house. 'Remarks by the President at the White House Science Fair'

In scientific investigations it is grievously wrong to pander to the publics impatience for results, or to let them think that for discovery it is necessary only to set up a great manufactory and a system of mass production. If in treatment team work is effective, in research it is the individual who counts first and above all. No great thought has ever sprung from anything but a single mind, suddenly conceiving. Throughout the whole world there has been too violent a forcing of the growth of ideas; too feverish a rush to perform experiments and publish conclusions. A year of vacation for calm detachment with all the individual workers thinking it all over in a desert should be proclaimed.

In Viewless Winds: Being the Recollections and Digressions of an Australian Surgeon (1939), 286. 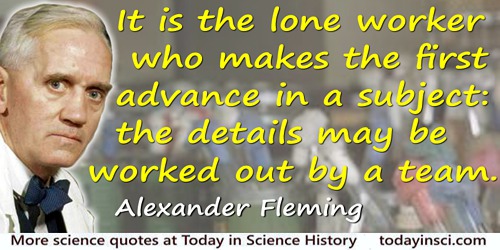 It is the lone worker who makes the first advance in a subject: the details may be worked out by a team, but the prime idea is due to the enterprise, thought, and perception of an individual.

Life is like a dogsled team. If you aint the lead dog, the scenery never changes.

Reality is a fabrication slapped together by an often bumbling inner team. ...The proclamation that "there can be no such thing as an objective fact" has a great deal of validity.

In 'A Trip Through the Perception Factory', Global Brain: The Evolution of Mass Mind from the Big Bang to the 21st Century (2000),70.

The notion that individualism came first runs against the very grain of cosmic history.  grouping has been inherent in evolution since the first quarks joined to form neutrons and protons. Similarly, replicatorsRNA, DNA, and geneshave always worked in teams The bacteria of 3.5 billion years ago were creatures of the crowd. So were the trilobites and echinoderms of the Cambrian age.

The result is that a generation of physicists is growing up who have never exercised any particular degree of individual initiative, who have had no opportunity to experience its satisfactions or its possibilities, and who regard cooperative work in large teams as the normal thing. It is a natural corollary for them to feel that the objectives of these large teams must be something of large social significance.

This has been far more than three men on a mission to the Moon; more still than the efforts of a government and industry team; more, even, than the efforts of one nation. We feel this stands as a symbol of the insatiable curiosity of all mankind to explore the unknown.

This is only one step in a much larger project. I discovered (no, not me: my team) the function of sugar nucleotides in cell metabolism. I want others to understood this, but it is not easy to explain: this is not a very noteworthy deed, and we hardly know even a little.
[replying when asked about the significance of his Nobel prize-winning achievement.]

[The toughest part of being in charge is] killing ideas that are great but poorly timed. And delivering tough feedback thats difficult to hear but that I know will help peopleand the teamin the long term.

[Vikram Sarabhai] informed the whole of his team about any new project and started working on it only after having discussed it with everyone.

[Werhner von Braun] is a human leader whose eyes and thoughts have always been turned toward the stars. It would be foolish to assign rocketry success to one person totally. Components must necessarily be the work of many minds; so must successive stages of development. But because Wernher von Braun joins technical ability, passionate optimism, immense experience and uncanny organizing ability in the elusive power to create a team, he is the greatest human element behind todays rocketry success