Another advantage of a mathematical statement is that it is so definite that it might be definitely wrong; and if it is found to be wrong, there is a plenteous choice of amendments ready in the mathematicians stock of formulae. Some verbal statements have not this merit; they are so vague that they could hardly be wrong, and are correspondingly useless.

As evolutionary time is measured, we have only just turned up and have hardly had time to catch breath, still marveling at our thumbs, still learning to use the brand-new gift of language. Being so young, we can be excused all sorts of folly and can permit ourselves the hope that someday, as a species, we will begin to grow up.

From 'Introduction' written by Lewis Thomas for Horace Freeland Judson, The Search for Solutions (1980, 1987), xvii.

Besides accustoming the student to demand, complete proof, and to know when he has not obtained it, mathematical studies are of immense benefit to his education by habituating him to precision. It is one of the peculiar excellencies of mathematical discipline, that the mathematician is never satisfied with à peu près. He requires the exact truth. Hardly any of the non-mathematical sciences, except chemistry, has this advantage. One of the commonest modes of loose thought, and sources of error both in opinion and in practice, is to overlook the importance of quantities. Mathematicians and chemists are taught by the whole course of their studies, that the most fundamental difference of quality depends on some very slight difference in proportional quantity; and that from the qualities of the influencing elements, without careful attention to their quantities, false expectation would constantly be formed as to the very nature and essential character of the result produced.

Bradley is one of the few basketball players who have ever been appreciatively cheered by a disinterested away-from-home crowd while warming up. This curious event occurred last March, just before Princeton eliminated the Virginia Military Institute, the years Southern Conference champion, from the NCAA championships. The game was played in Philadelphia and was the last of a tripleheader. The people there were worn out, because most of them were emotionally committed to either Villanova or Temple-two local teams that had just been involved in enervating battles with Providence and Connecticut, respectively, scrambling for a chance at the rest of the country. A group of Princeton players shooting basketballs miscellaneously in preparation for still another game hardly promised to be a high point of the evening, but Bradley, whose routine in the warmup time is a gradual crescendo of activity, is more interesting to watch before a game than most players are in play. In Philadelphia that night, what he did was, for him, anything but unusual. As he does before all games, he began by shooting set shots close to the basket, gradually moving back until he was shooting long sets from 20 feet out, and nearly all of them dropped into the net with an almost mechanical rhythm of accuracy. Then he began a series of expandingly difficult jump shots, and one jumper after another went cleanly through the basket with so few exceptions that the crowd began to murmur. Then he started to perform whirling reverse moves before another cadence of almost steadily accurate jump shots, and the murmur increased. Then he began to sweep hook shots into the air. He moved in a semicircle around the court. First with his right hand, then with his left, he tried seven of these long, graceful shots-the most difficult ones in the orthodoxy of basketball-and ambidextrously made them all. The game had not even begun, but the presumably unimpressible Philadelphians were applauding like an audience at an opera.

Hardly a year passes that fails to find a new, oft-times exotic, research method or technique added to the armamentarium of political inquiry. Anyone who cannot negotiate Chi squares, assess randomization, statistical significance, and standard deviations

In mathematics it [sophistry] had no place from the beginning: Mathematicians having had the wisdom to define accurately the terms they use, and to lay down, as axioms, the first principles on which their reasoning is grounded. Accordingly we find no parties among mathematicians, and hardly any disputes.

In Essays on the Intellectual Powers of Man, Essay 1, chap. 1.

Mathematics was born and nurtured in a cultural environment. Without the perspective which the cultural background affords, a proper appreciation of the content and state of present-day mathematics is hardly possible.

Philosophers no longer write for the intelligent, only for their fellow professionals. The few thousand academic philosophers in the world do not stint themselves: they maintain more than seventy learned journals. But in the handful that cover more than one subdivision of philosophy, any given philosopher can hardly follow more than one or two articles in each issue. This hermetic condition is attributed to technical problems in the subject. Since William James, Russell, and Whitehead, philosophy, like history, has been confiscated by scholarship and locked away from the contamination of general use.

Since the time of the Greeks and Romans medicine has made no progress, or hardly any, It should be reconstructed upon an entirely now basis. 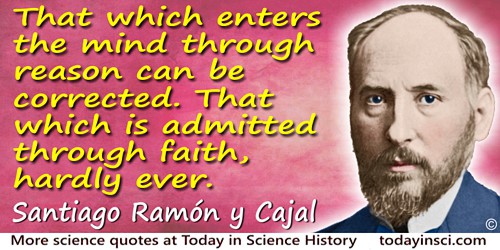 That which enters the mind through reason can be corrected. That which is admitted through faith, hardly ever.

The individual, if left alone from birth would remain primitive and beast-like in his thoughts and feelings to a degree that we can hardly conceive. The individual is what he is and has the significance that he has not so much in virtue of his individuality, but rather as a member of a great human society, which directs his material and spiritual existence from the cradle to the grave.

The more efficient causes of progress seem to consist of a good education during youth whilst the brain is impressible, and of a high standard of excellence, inculcated by the ablest and best men, embodied in the laws, customs and traditions of the nation, and enforced by public opinion. It should, however, be borne in mind, that the enforcement of public opinion depends on our appreciation of the approbation and disapprobation of others; and this appreciation is founded on our sympathy, which it can hardly be doubted was originally developed through natural selection as one of the most important elements of the social instincts.

The nineteenth century planted the words which the twentieth ripened into the atrocities of Stalin and Hitler. There is hardly an atrocity committed in the twentieth century that was not foreshadowed or even advocated by some noble man of words in the nineteenth.

The prevailing trend in modern physics is thus much against any sort of view giving primacy to ... undivided wholeness of flowing movement. Indeed, those aspects of relativity theory and quantum theory which do suggest the need for such a view tend to be de-emphasized and in fact hardly noticed by most physicists, because they are regarded largely as features of the mathematical calculus and not as indications of the real nature of things.

Those who assert that the mathematical sciences make no affirmation about what is fair or good make a false assertion; for they do speak of these and frame demonstrations of them in the most eminent sense of the word. For if they do not actually employ these names, they do not exhibit even the results and the reasons of these, and therefore can be hardly said to make any assertion about them. Of what is fair, however, the most important species are order and symmetry, and that which is definite, which the mathematical sciences make manifest in a most eminent degree. And since, at least, these appear to be the causes of many thingsnow, I mean, for example, order, and that which is a definite thing, it is evident that they would assert, also, the existence of a cause of this description, and its subsistence after the same manner as that which is fair subsists in.

Why do they prefer to tell stories about the possible medicinal benefits of the Houston toad rather than to offer moral reasons for supporting the Endangered Species Act? That law is plainly ideological; it is hardly to be excused on economic grounds.