[About John Evershed] There is much in our medallists career which is a reminder of the scientific life of Sir William Huggins. They come from the same English neighbourhood and began as amateurs of the best kind. They both possess the same kind of scientific aptitude.

As a little boy, I showed an abnormal aptitude for mathematics this gift played a horrible part in tussles with quinsy or scarlet fever, when I felt enormous spheres and huge numbers swell relentlessly in my aching brain.

Engineering is more closely akin to the arts than perhaps any other of the professions; first, because it requires the maximum of natural aptitude and of liking for the work in order to offset other factors; second, because it demands, like the arts, an almost selfless consecration to the job; and, third, because out of the hundreds who faithfully devote themselves to the task, only a few are destined to receive any significant rewardin either money or fame. 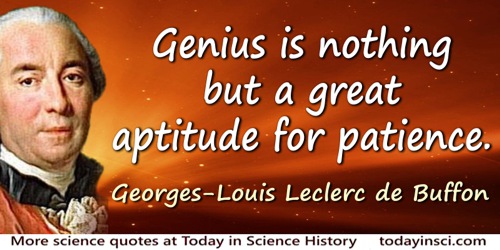 Genius is nothing but a great aptitude for patience.

He that could teach mathematics well, would not be a bad teacher in any of [physics, chemistry, biology or psychology] unless by the accident of total inaptitude for experimental illustration; while the mere experimentalist is likely to fall into the error of missing the essential condition of science as reasoned truth; not to speak of the danger of making the instruction an affair of sensation, glitter, or pyrotechnic show.

I cannot find anything showing early aptitude for acquiring languages; but that he [Clifford] had it and was fond of exercising it in later life is certain. One practical reason for it was the desire of being able to read mathematical papers in foreign journals; but this would not account for his taking up Spanish, of which he acquired a competent knowledge in the course of a tour to the Pyrenees. When he was at Algiers in 1876 he began Arabic, and made progress enough to follow in a general way a course of lessons given in that language. He read modern Greek fluently, and at one time he was furious about Sanskrit. He even spent some time on hieroglyphics. A new language is a riddle before it is conquered, a power in the hand afterwards: to Clifford every riddle was a challenge, and every chance of new power a divine opportunity to be seized. Hence he was likewise interested in the various modes of conveying and expressing language invented for special purposes, such as the Morse alphabet and shorthand.  I have forgotten to mention his command of French and German, the former of which he knew very well, and the latter quite sufficiently;

In paper, 'William Kingdon Clifford', The Fortnightly Review (1879), 31, 671. Published in advance of Leslie Stephen and Frederick Pollock (eds.), Cliffords Lectures and Essays (1879), Vol. 1, Introduction, 9. The 'Introduction' was written by Pollock.

In the discovery of lemmas the best aid is a mental aptitude for it. For we may see many who are quick at solutions and yet do not work by method ; thus Cratistus in our time was able to obtain the required result from first principles, and those the fewest possible, but it was his natural gift which helped him to the discovery.

As given in Euclid, The Thirteen Books of Euclid's Elements, translated from the text of Johan Ludvig Heiberg by Sir Thomas Little Heath, Vol. 1, Introduction and Books 1,2 (1908), 133. The passage also states that Proclus gives the definition of the term lemma as a proposition not proved beforehand. Glenn Raymond Morrow in A Commentary on the First Book of Euclid's Elements (1992), 165, states nothing more seems to be known of Cratistus.

Men of science, fit to teach, hardly exist. There is no demand for such men. The sciences make up life; they are important to life. The highly educated man fails to understand the simplest things of science, and has no peculiar aptitude for grasping them. I find the grown-up mind coming back to me with the same questions over and over again.

The first [quality] to be named must always be the power of attention, of giving one's whole mind to the patient without the interposition of anything of oneself. It sounds simple but only the very greatest doctors ever fully attain it.  The second thing to be striven for is intuition. This sounds an impossibility, for who can control that small quiet monitor? But intuition is only interference from experience stored and not actively recalled.  The last aptitude I shall mention that must be attained by the good physician is that of handling the sick man's mind.

The idea that aptitude for mathematics is rarer than aptitude for other subjects is merely an illusion which is caused by belated or neglected beginners.

When a man teaches something he does not know to somebody else who has no aptitude for it, and gives him a certificate of proficiency, the latter has completed the education of a gentleman.

When we think of giving a child a mathematical education we are apt to ask whether he has special aptitudes fitting him to receive it. Do we ask any such questions when we talk of teaching him to read and write?

Youre aware the boy failed my grade school math class, I take it? And not that many years later hes teaching college. Now I ask you: Is that the sorriest indictment of the American educational system you ever heard? [pauses to light cigarette.] No aptitude at all for long division, but never mind. Its him they ask to split the atom. How he talked his way into the Nobel prize is beyond me. But then, I suppose its like the man says, its not what you know...