A strict materialist believes that everything depends on the motion of matter. He knows the form of the laws of motion though he does not know all their consequences when applied to systems of unknown complexity.
Now one thing in which the materialist (fortified with dynamical knowledge) believes is that if every motion great & small were accurately reversed, and the world left to itself again, everything would happen backwards the fresh water would collect out of the sea and run up the rivers and finally fly up to the clouds in drops which would extract heat from the air and evaporate and afterwards in condensing would shoot out rays of light to the sun and so on. Of course all living things would regrede from the grave to the cradle and we should have a memory of the future but not of the past.
The reason why we do not expect anything of this kind to take place at any time is our experience of irreversible processes, all of one kind, and this leads to the doctrine of a beginning & an end instead of cyclical progression for ever.

All fossil anthropoids found hitherto have been known only from mandibular or maxillary fragments, so far as crania are concerned, and so the general appearance of the types they represented had been unknown; consequently, a condition of affairs where virtually the whole face and lower jaw, replete with teeth, together with the major portion of the brain pattern, have been preserved, constitutes a specimen of unusual value in fossil anthropoid discovery. Here, as in Homo rhodesiensis, Southern Africa has provided documents of higher primate evolution that are amongst the most complete extant. Apart from this evidential completeness, the specimen is of importance because it exhibits an extinct race of apes intermediate between living anthropoids and man ... Whether our present fossil is to be correlated with the discoveries made in India is not yet apparent; that question can only be solved by a careful comparison of the permanent molar teeth from both localities. It is obvious, meanwhile, that it represents a fossil group distinctly advanced beyond living anthropoids in those two dominantly human characters of facial and dental recession on one hand, and improved quality of the brain on the other. Unlike Pithecanthropus, it does not represent an ape-like man, a caricature of precocious hominid failure, but a creature well advanced beyond modern anthropoids in just those characters, facial and cerebral, which are to be anticipated in an extinct link between man and his simian ancestor. At the same time, it is equally evident that a creature with anthropoid brain capacity and lacking the distinctive, localised temporal expansions which appear to be concomitant with and necessary to articulate man, is no true man. It is therefore logically regarded as a man-like ape. I propose tentatively, then, that a new family of Homo-simidÃ¦ be created for the reception of the group of individuals which it represents, and that the first known species of the group be designated Australopithecus africanus, in commemoration, first, of the extreme southern and unexpected horizon of its discovery, and secondly, of the continent in which so many new and important discoveries connected with the early history of man have recently been made, thus vindicating the Darwinian claim that Africa would prove to be the cradle of mankind.

Astronomy was thus the cradle of the natural sciences and the starting point of geometrical theories. The stars themselves gave rise to the concept of a point; triangles, quadrangles and other geometrical figures appeared in the constellations; the circle was realized by the disc of the sun and the moon. Thus in an essentially intuitive fashion the elements of geometrical thinking came into existence.

At the bottom of every leaf-stem is a cradle, and in it is an infant germ; the winds will rock it, the birds will sing to it all summer long, but the next season it will unfold and go alone.

Extinguished theologians lie about the cradle of every science, as the strangled snakes beside that of Hercules; and history records that whenever science and orthodoxy have been fairly opposed, the latter has been forced to retire from the lists, bleeding and crushed if not annihilated; scotched, if not slain.

Humanity is at the very beginning of its existencea new-born babe, with all the unexplored potentialities of babyhood; and until the last few moments its interest has been centred, absolutely and exclusively, on its cradle and feeding bottle.

Hypotheses are cradle-songs by which the teacher lulls his scholars to sleep. The thoughtful and honest observer is always learning more and more of his limitations; he sees that the further knowledge spreads, the more numerous are the problems that make their appearance.

If in Germany the goddess Justitia had not the unfortunate habit of depositing the ministerial portfolios only in the cradles of her own progeny, who knows how many a German mathematician might not also have made an excellent minister.

Most manufacturers take resources out of the ground and convert them to products that are designed to be thrown away or incinerated within months. We call these cradle to grave product flows. Our answer to that is cradle to cradle design. Everything is reusedeither returned to the soil as nontoxic biological nutrients that will biodegrade safely, or returned to industry as technical nutrients that can be infinitely recycled.

Solitude in the presence of natural beauty and grandeur is the cradle of thought and aspirations which are not only good for the individual, but which society can ill do without.

Taking a very gloomy view of the future of the human race, let us suppose that it can only expect to survive for two thousand millions years longer, a period about equal to the past age of the earth. Then, regarded as a being destined to live for three-score years and ten, humanity although it has been born in a house seventy years old, is itself only three days old. But only in the last few minutes has it become conscious that the whole world does not centre round its cradle and its trappings, and only in the last few ticks of the clock has any adequate conception of the size of the external world dawned upon it. For our clock does not tick seconds, but years; its minutes are the lives of men. 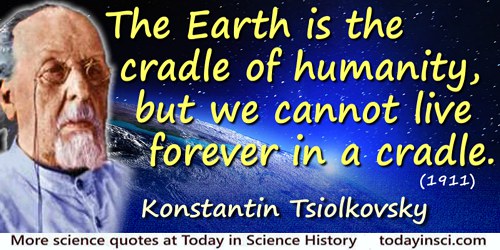 The Earth is the cradle of humanity, but we cannot live forever in a cradle.

In a Letter (1911) from Kaluga. A more direct translation from the letter is, A planet is the cradle of mind, but one cannot live in a cradle forever.

The fairest thing we can experience is the mysterious. It is the fundamental emotion which stands at the cradle of true art and true science. He who knows it not and can no longer wonder, no longer feel amazement, is as good as dead, a snuffed-out candle. It was the experience of mysteryeven if mixed with fearthat engendered religion. A knowledge of the existence of something we cannot penetrate, of the manifestations of the profoundest reason and the most radiant beauty, which are only accessible to our reason in their most elementary formsit is this knowledge and this emotion that constitute the truly religious attitude; in this sense, and in this alone, I am a deeply religious man.

The fairest thing we can experience is the mysterious. It is the fundamental emotion which stands at the cradle of true science. He who knows it not, and can no longer wonder, no longer feel amazement, is as good as dead. We all had this priceless talent when we were young. But as time goes by, many of us lose it. The true scientist never loses the faculty of amazement. It is the essence of his being.

The individual, if left alone from birth would remain primitive and beast-like in his thoughts and feelings to a degree that we can hardly conceive. The individual is what he is and has the significance that he has not so much in virtue of his individuality, but rather as a member of a great human society, which directs his material and spiritual existence from the cradle to the grave.

The losses of the natural world are our loss, their silence silences something within the human mind. Human language is lit with animal life: we play cats-cradle or have hare-brained ideas; we speak of badgering, or outfoxing someone; to squirrel something away and to ferret it out.  When our experience of the wild world shrinks, we no longer fathom the depths of our own words; language loses its lustre and vividness.

We reverence ancient Greece as the cradle of western science. Here for the first time the world witnessed the miracle of a logical system which proceeded from step to step with such precision that every single one of its propositions was absolutely indubitableI refer to Euclids geometry. This admirable triumph of reasoning gave the human intellect the necessary confidence in itself for its subsequent achievements. If Euclid failed to kindle your youthful enthusiasm, then you were not born to be a scientific thinker.

Cradle to Cradle is in counterpoint to Cradle to Grave. It basically says that if we look at everything as a take, make and waste system, then its a one-way system. Whereas If we think about things having multiple lives, cradle to cradle, we could design things that can go back to either nature or back to industry forever.