At the bottom of every leaf-stem is a cradle, and in it is an infant germ; the winds will rock it, the birds will sing to it all summer long, but the next season it will unfold and go alone.

Even today a good many distinguished minds seem unable to accept or even to understand that from a source of noise natural selection alone and unaided could have drawn all the music of the biosphere. In effect natural selection operates upon the products of chance and can feed nowhere else; but it operates in a domain of very demanding conditions, and from this domain chance is barred. It is not to chance but to these conditions that eveloution owes its generally progressive cource, its successive conquests, and the impresssion it gives of a smooth and steady unfolding.

In Jacques Monod and Austryn Wainhouse (trans.), Chance and Necessity: An Essay on the Natural Philosophy of Modern Biology (1971), 118-119.

Evolution on the large scale unfolds, like much of human history, as a succession of dynasties. 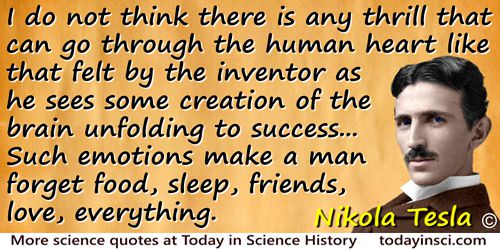 I do not think there is any thrill that can go through the human heart like that felt by the inventor as he sees some creation of the brain unfolding to success... Such emotions make a man forget food, sleep, friends, love, everything.

I now never make the preparations for penetrating into some small province of nature hitherto undiscovered without breathing a prayer to the Being who hides His secrets from me only to allure me graciously on to the unfolding of them.

In this age of space flight, when we use the modern tools of science to advance into new regions of human activity, the Bible ... this grandiose, stirring history of the gradual revelation and unfolding of the moral law ... remains in every way an up-to-date book. Our knowledge and use of the laws of nature that enable us to fly to the Moon also enable us to destroy our home planet with the atom bomb. Science itself does not address the question whether we should use the power at our disposal for good or for evil. The guidelines of what we ought to do are furnished in the moral law of God. It is no longer enough that we pray that God may be with us on our side. We must learn again that we may be on God's side.

Scientific observation has established that education is not what the teacher gives; education is a natural process spontaneously carried out by the human individual, and is acquired not by listening to words but by experiences upon the environment. The task of the teacher becomes that of preparing a series of motives of cultural activity, spread over a specially prepared environment, and then refraining from obtrusive interference. Human teachers can only help the great work that is being done, as servants help the master. Doing so, they will be witnesses to the unfolding of the human soul and to the rising of a New Man who will not be a victim of events, but will have the clarity of vision to direct and shape the future of human society.

The great object I desire to accomplish by this institution [the Cooper Institute], is to open the avenues of scientific knowledge to the youth of our country, so unfolding the volume of Nature, that the young may see the beauties of creation.

Speech (17 Sep 1853), laying the foundation stone of the Cooper Institute, in New York Times (19 Sep 1853), 3. The article clarifies that although the ceremony was spoken of as the laying of the corner-stone, the basement stories were already completed at that time.

The history of life is more adequately represented by a picture of 'punctuated equilibria' than by the notion of phyletic gradualism. The history of evolution is not one of stately unfolding, but a story of homeostatic equilibria, disturbed only 'rarely' (i.e. rather often in the fullness of time) by rapid and episodic events of speciation.

In 'On a theorem connected with Newton's Rule, etc.', Collected Mathematical Papers, 3, 424.

The persons who have been employed on these problems of applying the properties of matter and the laws of motion to the explanation of the phenomena of the world, and who have brought to them the high and admirable qualities which such an office requires, have justly excited in a very eminent degree the admiration which mankind feels for great intellectual powers. Their names occupy a distinguished place in literary history; and probably there are no scientific reputations of the last century higher, and none more merited, than those earned by great mathematicians who have laboured with such wonderful success in unfolding the mechanism of the heavens; such for instance as D Alembert, Clairaut, Euler, Lagrange, Laplace.

The religious conservatives make an important point when they oppose presenting evolution in a manner that suggests it has been proved to be entirely determined by random, mechanistic events, but they are wrong to oppose the teaching of evolution itself. Its occurrence, on Earth and in the Universe, is by now indisputable. Not so its processes, however. In this, there is need for a nuanced approach, with evidence of creative ordering presented as intrinsic both to what we call matter and to the unfolding story, which includes randomness and natural selection.

Epigraph, without citation, in Michael Dowd, Thank God for Evolution: How the Marriage of Science and Religion Will Transform Your Life and Our World (2008), 109.

The X-ray spectrometer opened up a new world. It proved to be a far more powerful method of analysing crystal structure. One could examine the various faces of a crystal in succession, and by noting the angles at which and the intensity with which they reflected the X-rays, one could deduce the way in which the atoms were arranged in sheets parallel to these faces. The intersections of these sheets pinned down the positions of the atoms in space. It was like discovering an alluvial gold field with nuggets lying around waiting to be picked up. It was a glorious time when we worked far into every night with new worlds unfolding before us in the silent laboratory.

[Scientific research reveals] the majestic spectacle of the order of nature gradually unfolding itself to mans consciousness and placing in his hands the implements of ever augmenting power to control his destinies and attain that ultimate comprehension of the universe which has in all ages constituted the supreme aspiration of man.