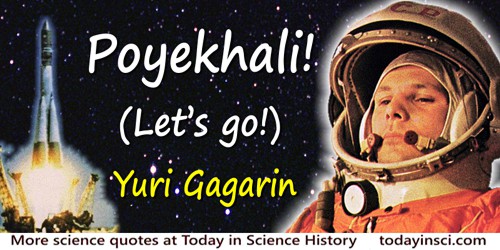 Attributed as his exclamation as the Vostok I was launched (12 Apr 1961) with the first human into space,

I am happy to report to you that the assignment of the Central Committee of the Communist party of the Soviet Union and the Soviet Government has been carried out. The world's first space flight has been accomplished in the Soviet space ship Vostok. All systems and equipment worked impeccably, I feel very well and am prepared to carry out any assignment of the party and the government.

I ask myself whether the huge national commitment of technical talent to human spaceflight and the ever-present potential for the loss of precious human life are really justifiable.

In 'Is Human Spaceflight Obsolete?', Issues in Science and Technology (Summer 2004). [Note: published one year after the loss of seven lives in the Space Shuttle Columbia disaster. ŌĆöWebmaster]

I find myself now preaching about the golden age of manned spaceflight, because something went on there, within us, that weŌĆÖre missing. When we went to the Moon, it was not only just standing on a new plateau for all mankind. We changed the way everybody in the world thought of themselves, you know. It was a change that went on inside of us. And weŌĆÖre losing that.

I fully expect that NASA will send me back to the Moon as they treated Senator [John] Glenn, and if they donŌĆÖt do otherwise, why, then IŌĆÖll have to do it myself.

About looking forward to the day he turned 77. In interview with Associated Press, as quoted in Peter Bond, 'Obituary: Charles Conrad Jnr', The Independent (10 Jul 1999).

I had a wonderful time the first time. I think I was probably more nervous back in those days because we did not know much about spaceflight in those days; we were sort of feeling our way and finding out what would happen to the human body in space and now we are putting the whole thing to work for everybody up here so I think I was a little more nervous the first time.

Replying to a Whetstone High School studentsŌĆÖ question during a school forum held using a downlink with the Discovery Space Shuttle mission (31 Oct 1998). On NASA web page 'STS-95 Educational Downlink'. Sarah Ravely, Holleh Moheimani, Janara Walker asked, ŌĆ£Senator Glenn, were you more nervous being the first American to orbit the Earth or to be the oldest man ever in space?ŌĆØ

I think that space flight is a condition of Nature that comes into effect when an intelligent species reaches the saturation point of its planetary habitat combined with a certain level of technological ability... I think it is a built-in gene-directed drive for the spreading of the species and its continuation.

If in some madhouse there is a lunatic who still believes the old churchly tenet that heaven is up above, even this [the first manned landing on the moon] probably will not disabuse him. Surely those of us still sane enough to be at large realize that this event will have no more to so with theology, God, or self-knowledge than any flower we pluck or any hand we pressŌĆöin fact, much less.

In this age of space flight, when we use the modern tools of science to advance into new regions of human activity, the Bible ... this grandiose, stirring history of the gradual revelation and unfolding of the moral law ... remains in every way an up-to-date book. Our knowledge and use of the laws of nature that enable us to fly to the Moon also enable us to destroy our home planet with the atom bomb. Science itself does not address the question whether we should use the power at our disposal for good or for evil. The guidelines of what we ought to do are furnished in the moral law of God. It is no longer enough that we pray that God may be with us on our side. We must learn again that we may be on God's side.

Insurance is the biggest single problem with this industry [commercial space flight].

As quoted by Braddock Gaskill, 'TGV Rockets ŌĆśWalking before they can runŌĆÖ', on web page of nasaspaceflight.com (Sep 2005). Gaskill wrote comment, ŌĆ£One barrier to space flight today that 1920ŌĆÖs aviation pioneers were not overly concerned with is a highly litigious society.ŌĆØ

It will be possible in a few more years to build radio controlled rockets which can be steered into such orbits beyond the limits of the atmosphere and left to broadcast scientific information back to the Earth. A little later, manned rockets will be able to make similar flights with sufficient excess power to break the orbit and return to Earth. (1945) [Predicting communications satellites.]

Lift off! We have a lift off
Thirty five minutes past the hour!

Man, in his quest for knowledge and progress, is determined and cannot be deterred. The exploration of space will go ahead, whether we join in or not, and it is one of the great adventures of all time, and no nation which expects to be the leader of other nations can expect to stay behind in this race for space.

My own lifetime spans the Wright Brothers' Kitty Hawk flight and manned-satellite orbiting.

Sarcastic Science, she would like to know,
In her complacent ministry of fear,
How we propose to get away from here
When she has made things so we have to go
Or be wiped out. Will she be asked to show
Us how by rocket we may hope to steer
To some star off there, say, a half light-year
Through temperature of absolute zero?
Why wait for Science to supply the how
When any amateur can tell it now?
The way to go away should be the same
As fifty million years ago we cameŌĆö
If anyone remembers how that was
I have a theory, but it hardly does.

'Why Wait for Science?' In Edward Connery Latham (ed.), The Poetry of Robert Frost: The Collected Poems, Complete and Unabridged (1979), 395.

Some people say there is a God out there. ... but in my travels around the earth all day long, I looked around and didn't see Him ... I saw no God or angels. The rocket was made by our own people. I don't believe in God. I believe in man, in his strength, his possibilities, and his reason.[After his return from a space flight orbitting the earth.]

As quoted, without citation, in H. T. Spence, Confronting Contemporary Christian Music: A Plain Account of Its History, Philosophy, and Future (2002), 7.

Spaceflights canŌĆÖt be stopped. This isn't the work of any one man or even a group of men. It is a historical process which mankind is carrying out in accordance with the natural laws of human development. 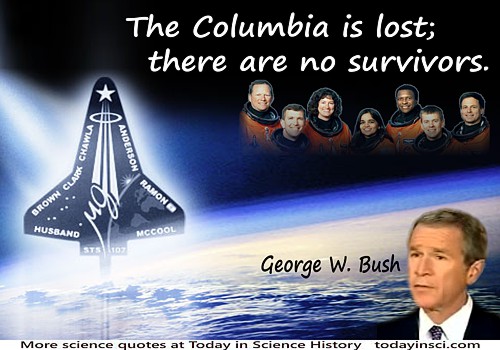 The Columbia is lost; there are no survivors. ŌĆ” In an age when space flight has come to seem almost routine, it is easy to overlook the dangers of travel by rocket, and the difficulties of navigating the fierce outer atmosphere of the Earth. These astronauts knew the dangers, and they faced them willingly, knowing they had a high and noble purpose in life. Because of their courage and daring idealism, we will miss them all the more. ŌĆ” The cause in which they died will continue. Mankind is led into the darkness beyond our world by the inspiration of discovery and the longing to understand. Our journey into space will go on.

The rockets that have made spaceflight possible are an advance that, more than any other technological victory of the twentieth century, was grounded in science fictionŌĆ” . One thing that no science fiction writer visualized, however, as far as I know, was that the landings on the Moon would be watched by people on Earth by way of television.

The worldŌĆÖs first spaceship, Vostok (East), with a man on board was launched into orbit from the Soviet Union on April 12, 1961. The pilot space-navigator of the satellite-spaceship Vostok is a citizen of the U.S.S.R., Flight Major Yuri Gagarin.
The launching of the multistage space rocket was successful and, after attaining the first escape velocity and the separation of the last stage of the carrier rocket, the spaceship went in to free flight on around-the-earth orbit. According to preliminary data, the period of revolution of the satellite spaceship around the earth is 89.1 min. The minimum distance from the earth at perigee is 175 km (108.7 miles) and the maximum at apogee is 302 km (187.6 miles), and the angle of inclination of the orbit plane to the equator is 65º 4ŌĆÖ. The spaceship with the navigator weighs 4725 kg (10,418.6 lb), excluding the weight of the final stage of the carrier rocket.
The first man in space was announced by the Soviet newsagency Tass on 12 April 1961, 9:59 a.m. Moscow time.

Three hundred and sixty five feet
Of gleaming white equipment
Being pushed up through
The blue skies of Florida.

To me, it [the 1962 space flight of Friendship 7] is not something that happened a long time ago. It seems like a couple of days ago, really. ItŌĆÖs a rare day I donŌĆÖt think about it, relive it in my mind. I can remember every switch I flipped, every move I made, every word I spoke and every word spoken to me. Clear as a bell.

As reported by Howard Wilkinson in 'John Glenn Had the Stuff U.S. Heroes are Made of', The Cincinnati Enquirer (20 Feb 2002).

What beauty. I saw clouds and their light shadows on the distant dear earthŌĆ”. The water looked like darkish, slightly gleaming spotsŌĆ”. When I watched the horizon, I saw the abrupt, contrasting transition from the earthŌĆÖs light-colored surface to the absolutely black sky. I enjoyed the rich color spectrum of the earth. It is surrounded by a light blue aureole that gradually darkens, becomes turquoise, dark blue, violet, and finally coal black.

Describing his view while making the first manned orbit of the earth (12 Apr 1961). As quoted in Don Knefel, Writing and Life: A Rhetoric for Nonfiction with Readings (1986), 93. Front Cover

[Apollo 7 was] an expedition of the mind, not of the heart.