EMBALM, v.t. To cheat vegetation by locking up the gases upon which it feeds. By embalming their dead and thereby deranging the natural balance between animal and vegetable life, the Egyptians made their once fertile and populous country barren and incapable of supporting more than a meagre crew. The modern metallic burial casket is a step in the same direction, and many a dead man who ought now to be ornamenting his neighbor's lawn as a tree, or enriching his table as a bunch of radishes, is doomed to a long inutility. We shall get him after awhile if we are spared, but in the meantime the violet and rose are languishing for a nibble at his glutæus maximus.

From common salt are obtained chemically as primary derivatives chlorine—both a war gas and a means of purifying water; and 'caustic soda.'  [O]n the chlorine side there is obtained chloride of lime, (a bleaching powder and a disinfectant), chloroform (an anesthetic), phosgene (a frightful ware gas), chloroacetophenone (another war gas), and an indigo and a yellow dye. [O]n the soda side we get metallic sodium, from which are derived sodium cyanide (a disinfectant), two medicines with [long] names, another war gas, and a beautiful violet dye. Thus, from a healthful, preservative condiment come things useful and hurtful—according to the intent or purpose.

How lavish nature has adornd the year
How the pale primrose and blue violet spring,
And birds essay their throats disusd to sing.

If we seek for the simplest arrangement, which would enable it [the eye] to receive and discriminate the impressions of the different parts of the spectrum, we may suppose three distinct sensations only to be excited by the rays of the three principal pure colours, falling on any given point of the retina, the red, the green, and the violet; while the rays occupying the intermediate spaces are capable of producing mixed sensations, the yellow those which belong to the red and green, and the blue those which belong to the green and violet.

'Chromatics', in Supplement to the Fourth, Fifth, and Sixth Editions of the Encyclopedia Britannica (1824), Vol. 3, 142. 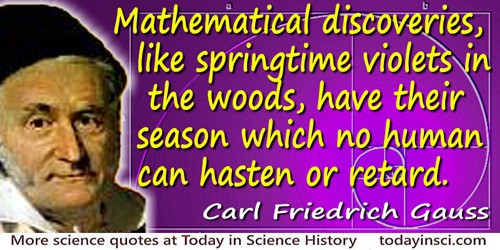 Mathematical discoveries, like springtime violets in the woods, have their season which no human can hasten or retard.

What Art was to the ancient world, Science is to the modern: the distinctive faculty. In the minds of men the useful has succeeded to the beautiful. Instead of the city of the Violet Crown, a Lancashire village has expanded into a mighty region of factories and warehouses. Yet, rightly understood, Manchester is as great a human exploit; as Athens.

What beauty. I saw clouds and their light shadows on the distant dear earth. The water looked like darkish, slightly gleaming spots. When I watched the horizon, I saw the abrupt, contrasting transition from the earths light-colored surface to the absolutely black sky. I enjoyed the rich color spectrum of the earth. It is surrounded by a light blue aureole that gradually darkens, becomes turquoise, dark blue, violet, and finally coal black.

Describing his view while making the first manned orbit of the earth (12 Apr 1961). As quoted in Don Knefel, Writing and Life: A Rhetoric for Nonfiction with Readings (1986), 93. Front Cover

When daisies pied and violets blue
And lady-smocks all silver-white
And cuckoo-buds of yellow hue
Do paint the meadows with delight,
The cuckoo then, on every tree,
Mocks married men; for thus sings he, Cuckoo!
Cuckoo, cuckoo! O word of fear,
Unpleasing to a married ear!

When the time is ripe for certain things, these things appear in different places in the manner of violets coming to light in early spring.

When ultra-violet light acts on a mixture of water, carbon dioxide, and ammonia, a vast variety of organic substances are made, including sugars and apparently some of the materials from which proteins are built up. But before the origin of life they must have accumulated till the primitive oceans reached the consistency of hot dilute soup. The first living or half-living things were probably large molecules synthesized under the influence of the suns radiation, and only capable of reproduction in the particularly favorable medium in which they originated.

~~[Misattributed ?]~~ Mathematical discoveries, like springtime violets in the woods, have their season which no human can hasten or retard.

Webmaster believes this quote is likely a misattributed paraphrase. The subject quote is as given in Israel Kleiner, 'Thinking the Unthinkable: The Story of Complex Numbers (with a Moral)', Mathematics Teacher (Oct 1988), 81, No. 7, 590. In Kleiners paper, alongside the quote is a citation, thus: (Kline 1972)? Notice the appended question mark. The reference at the end of the paper gives: Morris Kline, Mathematical Thought from Ancient to Modern Times (1972), but without page number. Webmaster checked a later edition, Vol. 3 (1990), 861, in which Kline has an epigraph, with different wording about violets, attributed - not to János - but to his father, Wolfgang Bolyai (who is also known as Farkas Bolyai). Translator Abe Shenitzer wrote an ambiguous passage in Herbert Meschkowski, NonEuclidean Geometry (1964), 33. In a discussion posted in the NCTM online Math Forum in 1998, Shenitzer clarified that the proper reading is that the violet talk is a simile used in advice given by the father to his son. Note that in the passage, János (Johann/John) reports about that advice in narrative form. Thus, one should also note that even in the original language, perhaps the fathers words are not verbatim. See Farkas Bolyai Quotes on another page of this website.