As I have often said, electrons and gerbils donŌĆÖt cheat.

By the worldly standards of public life, all scholars in their work are of course oddly virtuous. They do not make wild claims, they do not cheat, they do not try to persuade at any cost, they appeal neither to prejudice nor to authority, they are often frank about their ignorance, their disputes are fairly decorous, they do not confuse what is being argued with race, politics, sex or age, they listen patiently to the young and to the old who both know everything. These are the general virtues of scholarship, and they are peculiarly the virtues of science.

Did you hear Oxygen cheated on Magnesium? OMg.

Joke found on the Web

EMBALM, v.t.┬ĀTo cheat vegetation by locking up the gases upon which it feeds. By embalming their dead and thereby deranging the natural balance between animal and vegetable life, the Egyptians made their once fertile and populous country barren and incapable of supporting more than a meagre crew. The modern metallic burial casket is a step in the same direction, and many a dead man who ought now to be ornamenting his neighbor's lawn as a tree, or enriching his table as a bunch of radishes, is doomed to a long inutility. We shall get him after awhile if we are spared, but in the meantime the violet and rose are languishing for a nibble at his┬Āglut├”us maximus. 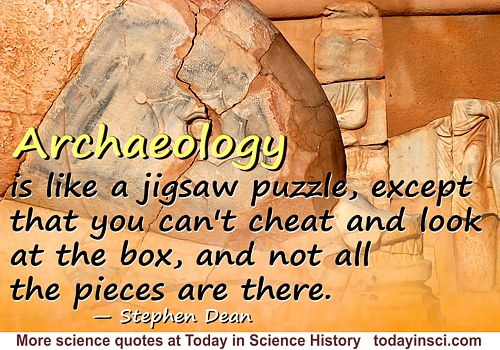 From interview with Sarah Marsh, in ŌĆ£Being a Council Archaeologist is ŌĆśLike Being a DetectiveŌĆÖŌĆØ, The Guardian (6 Sep 2013).

The most important and lasting truths are the most obvious ones. Nature cheats us with her mysteries, one after another, like a juggler with his tricks; but shews us her plain honest face, without our paying for it.

Then if the first argument remains secure (for nobody will produce a neater one, than the length of the periodic time is a measure of the size of the spheres), the order of the orbits follows this sequence, beginning from the highest: The first and highest of all is the sphere of the fixed stars, which contains itself and all things, and is therefore motionless. It is the location of the universe, to which the motion and position of all the remaining stars is referred. For though some consider that it also changes in some respect, we shall assign another cause for its appearing to do so in our deduction of the EarthŌĆÖs motion. There follows Saturn, the first of the wandering stars, which completes its circuit in thirty years. After it comes Jupiter which moves in a twelve-year long revolution. Next is Mars, which goes round biennially. An annual revolution holds the fourth place, in which as we have said is contained the Earth along with the lunar sphere which is like an epicycle. In fifth place Venus returns every nine months. Lastly, Mercury holds the sixth place, making a circuit in the space of eighty days. In the middle of all is the seat of the Sun. For who in this most beautiful of temples would put this lamp in any other or better place than the one from which it can illuminate everything at the same time? Aptly indeed is he named by some the lantern of the universe, by others the mind, by others the ruler. Trismegistus called him the visible God, Sophocles' Electra, the watcher over all things. Thus indeed the Sun as if seated on a royal throne governs his household of Stars as they circle around him. Earth also is by no means cheated of the MoonŌĆÖs attendance, but as Aristotle says in his book On Animals the Moon has the closest affinity with the Earth. Meanwhile the Earth conceives from the Sun, and is made pregnant with annual offspring. We find, then, in this arrangement the marvellous symmetry of the universe, and a sure linking together in harmony of the motion and size of the spheres, such as could be perceived in no other way. For here one may understand, by attentive observation, why Jupiter appears to have a larger progression and retrogression than Saturn, and smaller than Mars, and again why Venus has larger ones than Mercury; why such a doubling back appears more frequently in Saturn than in Jupiter, and still more rarely in Mars and Venus than in Mercury; and furthermore why Saturn, Jupiter and Mars are nearer to the Earth when in opposition than in the region of their occultation by the Sun and re-appearance. Indeed Mars in particular at the time when it is visible throughout the night seems to equal Jupiter in size, though marked out by its reddish colour; yet it is scarcely distinguishable among stars of the second magnitude, though recognized by those who track it with careful attention. All these phenomena proceed from the same course, which lies in the motion of the Earth. But the fact that none of these phenomena appears in the fixed stars shows their immense elevation, which makes even the circle of their annual motion, or apparent motion, vanish from our eyes.

There seem to be but three ways for a nation to acquire wealth: the first is by war, as the Romans did, in plundering their conquered neighborsŌĆöthis is robbery; the second by commerce, which is generally cheating; the third by agriculture, the only honest way, wherein man receives a real increase of the seed thrown into the ground, in a kind of continual miracle, wrought by the hand of God in his favor, as a reward for his innocent life and his virtuous industry.

In 'Positions to be Examined', The Works of Benjamin Franklin Consisting of Essays, Humorous, Moral and Literary (1824), 241.

We cannot cheat on DNA. We cannot get round photosynthesis. We cannot say I am not going to give a damn about phytoplankton. All these tiny mechanisms provide the preconditions of our planetary life. To say we do not care is to say in the most literal sense that “we choose death.”

Quoted by Tim Folger in 'Newsflash: Time May Not Exist', Discover Magazine (Jun 2007).

You Surgeons of London, who puzzle your Pates,
To ride in your Coaches, and purchase Estates,
Give over, for Shame, for your Pride has a Fall,
And ye Doctress of Epsom has outdone you all.

Dame Nature has given her a doctor's degree,
She gets all the patients and pockets the fee;
So if you don't instantly prove it a cheat,
She'll loll in a chariot whilst you walk the street.
Cautioning doctors about the quack bone-setter, Mrs. Mapp (d. 22 Dec 1737), who practiced in Epsom town once a week, arriving in a coach-and-four.

Verses from a song in a comedy at the Lincoln's Inn Fields Theatre, called The Husband's Relief, or The Female Bone-setter and the Worm-doctor. In Robert Chambers, The Book of Days (1832), 729.

[W]e pity our fathers for dying before steam and galvanism, sulphuric ether and ocean telegraphs, photograph and spectrograph arrived, as cheated out of their human estate.

ŌĆÖTis late; the astronomer in his lonely height
Exploring all the dark, descries from far
Orbs that like distant isles of splendor are,
And mornings whitening in the infinite.ŌĆ”
He summons one disheveled, wandering star,ŌĆö
Return ten centuries hence on such a night.
That star will come. It dare not by one hour
Cheat science, or falsify her calculation;
Men will have passed, but watchful in the tower
Man shall remain in sleepless contemplation;
And should all men have perished there in turn,
Truth in their stead would watch that starŌĆÖs return.

From poem, 'The Appointment', as translated by Arthur OŌĆÖShaughnessy, collected in Samuel Waddington (ed.), The Sonnets of Europe (1886), 154.