As an answer to those who are in the habit of saying to every new fact,  What is its use ? Dr. Franklin says to such, What is the use of an infant? The answer of the experimentalist would be, Endeavour to make it useful.

At the bottom of every leaf-stem is a cradle, and in it is an infant germ; the winds will rock it, the birds will sing to it all summer long, but the next season it will unfold and go alone.

Exercises in being obedient can not begin too early, and I have, during an almost daily observation of six years, discovered no harm from an early, consistent guiding of the germinating will, provided only this guiding be done with the greatest mildness and justice, as if the infant had already an insight into the benefits of obedience.

Geology has shared the fate of other infant sciences, in being for a while considered hostile to revealed religion; so like them, when fully understood, it will be found a potent and consistent auxiliary to it, exalting our conviction of the Power, and Wisdom, and Goodness of the Creator.

Geology and Mineralogy Considered with Reference to Natural Theology (1836), Vol. 1, 9. 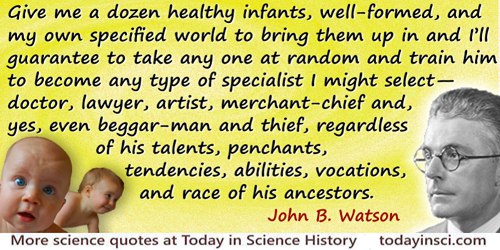 Give me a dozen healthy infants, well-formed, and my own specified world to bring them up in and Ill guarantee to take any one at random and train him to become any type of specialist I might select—doctor, lawyer, artist, merchant-chief and, yes, even beggar-man and thief, regardless of his talents, penchants, tendencies, abilities, vocations, and race of his ancestors. (1930)

I believe that the medical treatment of the various abnormal conditions arising in infants is in the future to be largely dietetic rather than by means of drugs.

In order to survive, an animal must be born into a favoring or at least tolerant environment. Similarly, in order to achieve preservation and recognition, a specimen of fossil man must be discovered in intelligence, attested by scientific knowledge, and interpreted by evolutionary experience. These rigorous prerequisites have undoubtedly caused many still-births in human palaeontology and are partly responsible for the high infant mortality of discoveries of geologically ancient man.

Isaac Newton was born at Woolsthorpe, near Grantham, in Lincolnshire, on Christmas Day, 1642: a weakly and diminutive infant, of whom it is related that, at his birth, he might have found room in a quart mug. He died on March the 20th, 1727, after more than eighty-four years of more than average bodily health and vigour; it is a proper pendant to the story of the quart mug to state that he never lost more than one of his second teeth.

It is as natural to die as to be born; and to a little infant, perhaps, the one is as painful as the other.

It is as natural to man to die as to be born; and to a little infant, perhaps, the one is as painful as the other.

It is often assumed that because the young child is not competent to study geometry systematically he need be taught nothing geometrical; that because it would be foolish to present to him physics and mechanics as sciences it is useless to present to him any physical or mechanical principles.
An error of like origin, which has wrought incalculable mischief, denies to the scholar the use of the symbols and methods of algebra in connection with his early essays in numbers because, forsooth, he is not as yet capable of mastering quadratics!  The whole infant generation, wrestling with arithmetic, seek for a sign and groan and travail together in pain for the want of it; but no sign is given them save the sign of the prophet Jonah, the withered gourd, fruitless endeavor, wasted strength.

From presidential address (9 Sep 1884) to the General Meeting of the American Social Science Association, 'Industrial Education', printed in Journal of Social Science (1885), 19, 121. Collected in Francis Amasa Walker, Discussions in Education (1899), 132.

It is well-known that those who have charge of young infants, that it is difficult to feel sure when certain movements about their mouths are really expressive; that is when they really smile. Hence I carefully watched my own infants. One of them at the age of forty-five days, and being in a happy frame of mind, smiled... I observed the same thing on the following day: but on the third day the child was not quite well and there was no trace of a smile, and this renders it probable that the previous smiles were real.

Jealousy was plainly exhibited when I fondled a large doll, and when I weighed his infant sister, he being then 15? months old. Seeing how strong a feeling of jealousy is in dogs, it would probably be exhibited by infants at any earlier age than just specified if they were tried in a fitting manner

Man has two conditions of existence in the body. Hardly two creatures can be less alike than an infant and a man. The whole fetal state is a preparation for birth ... The human brain, in its earlier stage, resembles that of a fish: as it is developed, it resembles more the cerebral mass of a reptile; in its increase, it is like that of a bird, and slowly, and only after birth, does it assume the proper form and consistence of the human encephalon.

Mere infants of the universe, with no feel for infinity, no sense of place in time and space, we human beings have yet to comprehend the enormity of what we are doing: In a geological second, we are unraveling complexities it took eternity to create.

In Jacques Cousteau and Susan Schiefelbein, The Human, the Orchid, and the Octopus: Exploring and Conserving Our Natural World (2007), 107.

Papyra, throned upon the banks of Nile,
Spread her smooth leaf, and waved her silver style.
The storied pyramid, the laureld bust,
The trophyd arch had crumbled into dust;
The sacred symbol, and the epic song (Unknown the character, forgot the tongue,)
With each unconquerd chief, or sainted maid,
Sunk undistinguishd in Oblivions shade.
Sad oer the scatterd ruins Genius sighd,
And infant Arts but learnd to lisp, and died.
Till to astonishd realms Papyra taught To paint in mystic colours Sound and Thought,
With Wisdoms voice to print the page sublime,
And mark in adamant the steps of Time.

Science continually though gradually adds to our consciousness of life; but for full knowledge we are infants in the dark. 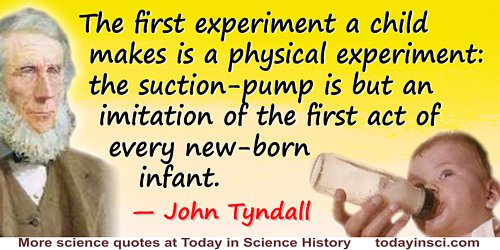 The first experiment a child makes is a physical experiment: the suction-pump is but an imitation of the first act of every new-born infant.

Lecture 'On the Study of Physics', Royal Institution of Great Britain (Spring 1854). Collected in Fragments of Science for Unscientific People: A Series of Detached Essays, Lectures, and Reviews (1892), Vol. 1, 283.

The mighty steam-engine has its germ in the simple boiler in which the peasant prepares his food. The huge ship is but the expansion of the floating leaf freighted with its cargo of atmospheric dust; and the flying balloon is but the infant's soap-bubble lightly laden and overgrown. But the Telescope, even in its most elementary form, embodies a novel and gigantic idea, without an analogue in nature, and without a prototype in experience

Stories of Inventors and Discoverers in Science and the Useful Arts (1860), 145.

The more innocuous the name of a weapon, the more hideous its impact. (Some of the most horrific weapons of the Vietnam era were named Bambi, Infant, Daisycutter, Grasshopper, and Agent Orange. Nor is the trend new: from the past we have Mustard Gas, Angel Chasers (two cannonballs linked with a chain for added destruction) and The Peacemaker to name but a few.)

The young blush much more freely than the old but not during infancy, which is remarkable, as we know that infants at a very early age redden from passion.

Expression of the Emotions in Man and Animals

Then I have more than an impressionit amounts to a certaintythat algebra is made repellent by the unwillingness or inability of teachers to explain why we suddenly start using a and b, what exponents mean apart from their handling, and how the paradoxical behavior of + and  came into being. There is no sense of history behind the teaching, so the feeling is given that the whole system dropped down readymade from the skies, to be used only by born jugglers. This is what paralyzeswith few exceptionsthe infant, the adolescent, or the adult who is not a juggler himself.

There isnt one, not one, instance where its known what pattern of neural connectivity realizes a certain cognitive content, inate or learned, in either the infants nervous system or the adults. To be sure, our brains must somehow register the contents of our mental states. The trouble is: Nobody knows howby what neurological meansthey do so. Nobody can look at the patterns of connectivity (or of anything else) in a brain and figure out whether it belongs to somebody who knows algebra, or who speaks English, or who believes that Washington was the Father of his country.

In Critical Condition: Polemic Essays on Cognitive science and the Philosophy of the Mind (1988), 269-71. In Vinoth Ramachandra, Subverting Global Myths: Theology and the Public Issues Shaping our World (2008), 180.

Whoever looks at the insect world, at flies, aphides, gnats and innumerable parasites, and even at the infant mammals, must have remarked the extreme content they take in suction, which constitutes the main business of their life. If we go into a library or newsroom, we see the same function on a higher plane, performed with like ardor, with equal impatience of interruption, indicating the sweetness of the act. In the highest civilization the book is still the highest delight.