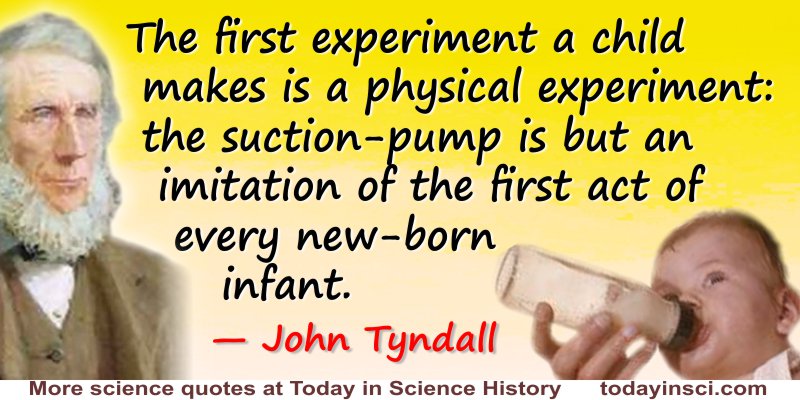 “The first experiment a child makes is a physical experiment: the suction-pump is but an imitation of the first act of every new-born infant.”
— John Tyndall
Lecture, 'On the Study of Physics' (1854).

This quote was given by John Tyndall in his lecture 'On the Study of Physics', which he delivered to the Royal Institution of Great Britain in the Spring of 1854. He gave his talk a longer title, “On the Importance of the Study of Physics as a Branch of Education,” and for the purpose of the lecture, he defined Physics as “that portion of natural science which lies midway between astronomy and chemistry.” The former, he said was “applied to ‘masses of enormous weight’ while the latter is Physics applied to atoms and molecules.”

As Tyndall laid out the process of exploring the world, he explained experimentation was natural from birth:

The first experiment a child makes is a physical experiment: the suction-pump is but an imitation of the first act of every new-born infant. … The child grows, but is still an experimenter: he grasps at the moon, and his failure teaches him to respect distance. At length his little fingers acquire sufficient mechanical tact to lay hold of a spoon. He thrusts the instrument into his mouth, hurts his gums, and thus learns the impenetrability of matter. He lets the spoon fall, and jumps with delight to hear it rattle against the table. The experiment made by accident is repeated with intention, and thus the young student receives his first lessons upon sound and gravitation.

The child he describes gradually grows until an older boy, then

“As thought ripens, he desires to know the character and causes of the phenomena presented to his observation; … we may fairly claim for the study of Physics the recognition that it answers to an impulse implanted by nature in the constitution of man.”


Text by Webmaster, with quotes from 'On the Study of Physics', a Lecture delivered in the Royal Institution of Great Britain in the Spring of 1854. Fragments of Science for Unscientific People: A Series of Detached Essays, Lectures, and Reviews (1892), Vol. 1, 280-284. (source)