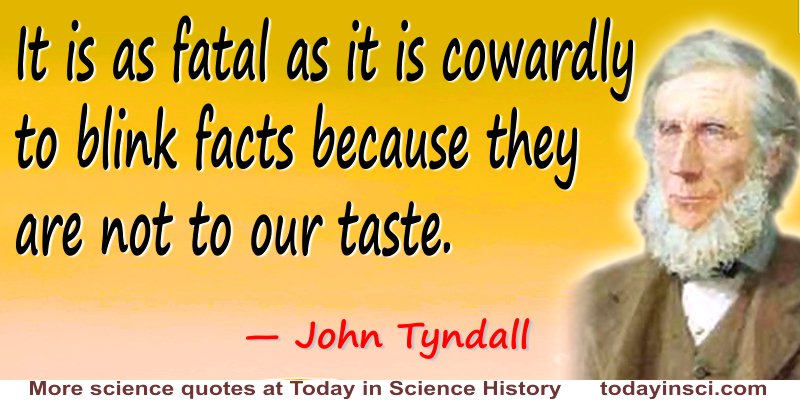 “It is as fatal as it is cowardly to blink facts because they are not to our taste.”
— John Tyndall

This statement by the 19th century physicist, John Tyndall, would be very applicable in the present time to the denial of climage change. It appears in the chapter 'Science and Man' in a collection of his essays, Fragments of Science published in 1879. The chapter comes (footnoted as “with additions”) from his Presidential Address to the Birmingham and Midland Institute on 1 Oct 18777.

The quote above appears as part of a rather philosophical discussion, but a little later, Tyndall gives an example relevant in his time (and sadly still reverberating today):

“Most of you have been forced to listen to the outcries and denunciations which rang discordant through the land for some years after the publication of Mr. Darwin's ‘Origin of Species.’ Well, the world—even the clerical world—has for the most part settled down in the belief that Mr. Darwin's book simply reflects the truth of nature.”

It should be noted that several other examples of the use of the expression to “blink facts” can be found in books through the period about 1850-1930. It means “to refuse to recognize or face facts.”

A similar idea was expressed by the editor in his 'Foreword' to Sinclair's Magazine (1918) when he wrote:1

“To blink facts is as safe as to fight blindfolded.”