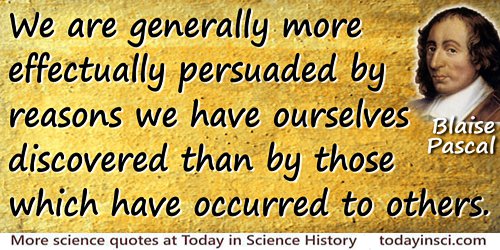 On se persuade mieux, pour lordinaire, par les raisons quon a soi-même trouvées, que par celles qui sont venues dans lesprit des autres.
We are generally more effectually persuaded by reasons we have ourselves discovered than by those which have occurred to others.

Every day we are interacting with the economy, whether we want to or not, and whether we know it or not. To have a level of control over our lives, we need to understand the connections between money and events and ourselves.

I have always found small mammals enough like ourselves to feel that I could understand what their lives would be like, and yet different enough to make it a sort of adventure and exploration to see what they were doing.

From narration to Netflix TV program, A Life on Our Planet: My Witness Statement and a Vision for the Future (4 Oct 2020).

Next to enjoying ourselves, the next greatest pleasure consists in preventing others from enjoying themselves, or, more generally, in the acquisition of power.

The earth does not belong to us; we belong to the earth. All things are connected, like the blood which unites one family. Mankind did not weave the web of life. We are but one strand within it. Whatever we do to the web, we do to ourselves.

Fictional speech from script for ABC TV movie, Home (1972). The words by the screenwriter were inspired from an Earth Day gathering in 1970, where Perry heard a historical account by physician Dr. Henry Smith. The doctor's words were published in a Seattle newspaper, written up to 33 years after being present, when in Dec 1854 Chief Seattle made an impassioned speech, in the language of his own people, the Suquwamish. The Chief, with other tribal leaders, were meeting with the Territorial Governor who was trying to get them to sign away their lands and instead receive protection on a reservation. Dr. Smith may not have been fluent in the language of the Suquwamish, although he did make some notes at the time. But he wrote poetry, making embellishment or invention likely, so it is questionable whether his newspaper account is reliable in providing the Chief's actual words. In turn, Perry has made clear that his script provided a fictional representation the Chief. The televisedquote, however became mythical, and is incorrectly passed along as attributed to Chief Seattle in 1854, but the truth is the words are contemporary, written by Perry, a screenwriter. Also seen as: Humankind has not woven the web of life. We are but one thread within it. Whatever we do to the web, we do to ourselves. All things are bound together. All things connect.

To Observations which ourselves we make,
We grow more partial for th' observer's sake.

To see the Earth as it truly is, small and blue and beautiful in that eternal silence where it floats, is to see ourselves as riders on the Earth together, brothers on that bright loveliness in the eternal coldbrothers who know now that they are truly brothers.

In The New York Times (25 Dec 1968), 1. Written after the Apollo 8 transmitted a photograph of the Earth from space.

To unfold the secret laws and relations of those high faculties of thought by which all beyond the merely perceptive knowledge of the world and of ourselves is attained or matured, is a object which does not stand in need of commendation to a rational mind.

We might expect that as we come close upon living nature the characters of our old records would grow legible and clear; but just when we begin to enter on the history of the physical changes going on before our eyes, and in which we ourselves bear a part, our chronicle seems to fail us: a leaf has been torn out from Natures book, and the succession of events is almost hidden from our eyes. [On gaps in the Pleistocene fossil record.]

As quoted by Hugh Miller in Lecture First, collected in Popular Geology: A Series of Lectures Read Before the Philosophical Institution of Edinburgh, with Descriptive Sketches from a Geologist's Portfolio (1859), 82-83.

We must not forget  that influence is not a simple, but on the contrary, a very complex, bilateral relation. We are not influenced by everything we read or learn. In one sense, and perhaps the deepest, we ourselves determine the influences we are submitting to; our intellectual ancestors are by no means given to, but are freely chosen by, us.

We seem ambitious God's whole work to undo.
...With new diseases on ourselves we war,
And with new physic, a worse engine far. 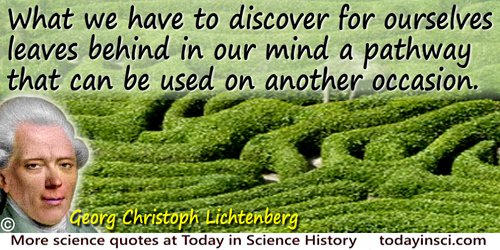 What we have to discover for ourselves leaves behind in our mind a pathway that can be used on another occasion.