A lodestone is a wonderful thing in very many experiments, and like living things. And one of its remarkable virtues in that which the ancients considered to be a living soul in the sky, in the globes and in the stars, in the sun and in the moon.

Almighty God, to whose efficacious Word all things owe their original, abounding in his own glorious Essence with infinite goodness and fecundity, did in the beginning Create Man after his own likeness, Male and Female, created he them; the true distinction of which Sexes, consists merely in the different site of those parts of the body, wherein Generation necessarily requires a Diversity: for both Male and Female he impartially endued with the same, and altogether indifferent form of Soul, the Woman being possess‚Äôd of no less excellent Faculties of Mind, Reason, and Speech, than the Man, and equally with him aspiring to those Regions of Bliss and Glory, where there shall be no exception of Sex.

Analogy is a wonderful, useful and most important form of thinking, and biology is saturated with it. Nothing is worse than a horrible mass of undigested facts, and facts are indigestible unless there is some rhyme or reason to them. The physicist, with his facts, seeks reason; the biologist seeks something very much like rhyme, and rhyme is a kind of analogy.... This analogizing, this fine sweeping ability to see likenesses in the midst of differences is the great glory of biology, but biologists don't know it.... They have always been so fascinated and overawed by the superior prestige of exact physical science that they feel they have to imitate it.... In its central content, biology is not accurate thinking, but accurate observation and imaginative thinking, with great sweeping generalizations.

I have always found small mammals enough like ourselves to feel that I could understand what their lives would be like, and yet different enough to make it a sort of adventure and exploration to see what they were doing.

If a Schirrus by long standing, increasing, and motion of the adjacent Parts is thus moved, that the neighbouring Vessels around its edges begin to inflame, it‚Äôs become malignant, and from its likeness to a Crab, is now called a Cancer, or Carcinoma.

In acute diseases the physician must conduct his inquiries in the following way. First he must examine the face of the patient, and see whether it is like the faces of healthy people, and especially whether it is like its usual self. Such likeness will be the best sign, and the greatest unlikeness will be the most dangerous sign. The latter will be as follows. Nose sharp, eyes hollow, temples sunken, ears cold and contracted with their lobes turned outwards, the skin about the face hard and tense and parched, the colour of the face as a whole being yellow or black.

Let us investigate more closely this property common to animal and plant, this power of producing its likeness, this chain of successive existences of individuals, which constitutes the real existence of the species.

Now, all causes of natural effects must be expressed by means of lines, angles and figures, for otherwise it is impossible to grasp their explanation. This is evident as follows. A natural agent multiplies its power from itself to the recipient, whether it acts on sense or on matter. This power is sometimes called species, sometimes a likeness, and it is the same thing whatever it may be called; and the agent sends the same power into sense and into matter, or into its own contrary, as heat sends the same thing into the sense of touch and into a cold body. For it does not act, by deliberation and choice, and therefore it acts in a single manner whatever it encounters, whether sense or something insensitive, whether something animate or inanimate. But the effects are diversified by the diversity of the recipient, for when this power is received by the senses, it produces an effect that is somehow spiritual and noble; on the other hand, when it is received by matter, it produces a material effect. Thus the sun produces different effects in different recipients by the same power, for it cakes mud and melts ice.

The assumptions of population thinking are diametrically opposed to those of the typologist. The populationist stresses the uniqueness of everything in the organic world. What is true for the human species,‚Äìthat no two individuals are alike, is equally true for all other species of animals and plants ... All organisms and organic phenomena are composed of unique features and can be described collectively only in statistical terms. Individuals, or any kind of organic entities, form populations of which we can determine the arithmetic mean and the statistics of variation. Averages are merely statistical abstractions, only the individuals of which the populations are composed have reality. The ultimate conclusions of the population thinker and of the typologist are precisely the opposite. For the typologist, the type (eidos) is real and the variation. an illusion, while for the populationist the type (average) is an abstraction and only the variation is real. No two ways of looking at nature could be more different. 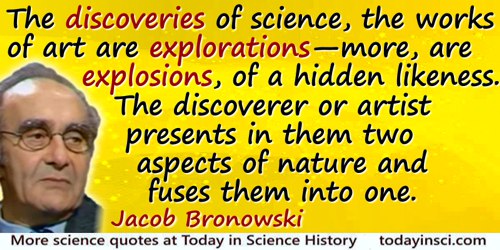 The discoveries of science, the works of art are explorations‚Äîmore, are explosions, of a hidden likeness. The discoverer or artist presents in them two aspects of nature and fuses them into one. This is the act of creation, in which an original thought is born, and it is the same act in original science and original art.

The greatest marvel is not in the individual. It is in the succession, in the renewal and in the duration of the species that Nature would seem quite inconceivable. This power of producing its likeness that resides in animals and plants, this form of unity, always subsisting and appearing eternal, this procreative virtue which is perpetually expressed without ever being destroyed, is for us a mystery which, it seems, we will never be able to fathom.

The psychoanalysis of individual human beings, however, teaches us with quite special insistence that the god of each of them is formed in the likeness of his father, that his personal relation to God depends on his relation to his father in the flesh and oscillates and changes along with that relation, and that at bottom God is nothing other than an exalted father.

Thinking is merely the comparing of ideas, discerning relations of likeness and of difference between ideas, and drawing inferences. It is seizing general truths on the basis of clearly apprehended particulars. It is but generalizing and particularizing. Who will deny that a child can deal profitably with sequences of ideas like: How many marbles are 2 marbles and 3 marbles? 2 pencils and 3 pencils? 2 balls and 3 balls? 2 children and 3 children? 2 inches and 3 inches? 2 feet and 3 feet? 2 and 3? Who has not seen the countenance of some little learner light up at the end of such a series of questions with the exclamation, ‚ÄúWhy it‚Äôs always that way. Isn‚Äôt it?‚Äù This is the glow of pleasure that the generalizing step always affords him who takes the step himself. This is the genuine life-giving joy which comes from feeling that one can successfully take this step. The reality of such a discovery is as great, and the lasting effect upon the mind of him that makes it is as sure as was that by which the great Newton hit upon the generalization of the law of gravitation. It is through these thrills of discovery that love to learn and intellectual pleasure are begotten and fostered. Good arithmetic teaching abounds in such opportunities.

In Arithmetic in Public Education (1909), 13. As quoted and cited in Robert √âdouard Moritz, Memorabilia Mathematica; Or, The Philomath‚Äôs Quotation-book (1914), 68.

Thus God himself was too kind to remain idle, and began to play the game of signatures, signing his likeness into the world; therefore I chance to think that all nature and the graceful sky are symbolized in the art of geometry.

Using archaeological and anatomical science rather than artistic interpretation makes this the most accurate likeness ever created.

Why waste words? Geometry existed before the Creation, is co-eternal with the mind of God, is God himself (what exists in God that is not God himself?); geometry provided God with a model for the Creation and was implanted into man, together with God‚Äôs own likeness‚Äîand not merely conveyed to his mind through the eyes.

From Harmonice Mundi, Lib. IV, Cap. I, Gesammelte Werke, Vol. VI, as quoted and cited in an epigraph, Jagdish Mehra, Einstein, Hilbert, and The Theory of Gravitation: Historical Origins (1974), 1.