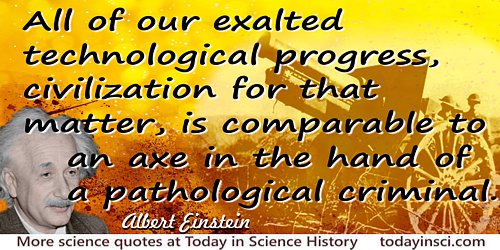 All of our exalted technological progress, civilization for that matter, is comparable to an axe in the hand of a pathological criminal.

Do there exist many worlds, or is there but a single world? This is one of the most noble and exalted questions in the study of Nature.

Quoted in Grant McColley, 'The Seventeenth-Century Doctrine of a Plurality of Worlds', Annals of Science (1936), 1, 385. As cited in George Sarton and Frances Siegel, 'Forty-Ninth Critical Bibliography of the History and Philosophy of Science and of the History of Civilization', Isis (May 1937), 27, No. 1, 174-175.

Everything that the human race has done and thought is concerned with the satisfaction of deeply felt needs and the assuagement of pain. One has to keep this constantly in mind if one wishes to understand spiritual movements and their development. Feeling and longing are the motive force behind all human endeavor and human creation, in however exalted a guise the latter may present themselves to us.

Fine sense and exalted sense are not half as useful as common sense.

For truly in nature there are many operations that are far more than mechanical. Nature is not simply an organic body like a clock, which has no vital principle of motion in it; but it is a living body which has life and perception, which are much more exalted than a mere mechanism or a mechanical motion.

From the war of nature, from famine and death, the most exalted object which we are capable of conceiving, namely, the production of the higher animals, directly follows. There is grandeur in this view of life, with its several powers, having been originally breathed into a few forms or into one; and that, whilst this planet has gone cycling on according to the fixed law of gravity, from so simple a beginning endless forms most beautiful and most wonderful have been, and are being, evolved.

Concluding paragraph in The Origin of Species (1859), 490. In the second edition, Darwin changed â€śbreathedâ€ť to â€śbreathed by the Creatorâ€ť. 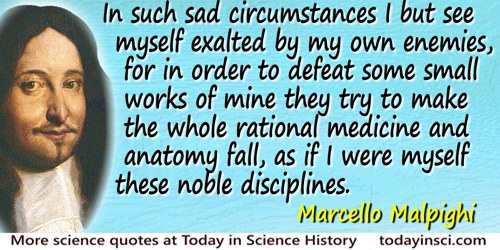 In such sad circumstances I but see myself exalted by my own enemies, for in order to defeat some small works of mine they try to make the whole rational medicine and anatomy fall, as if I were myself these noble disciplines.

Know, oh Brother (May God assist thee and us by the Spirit from Him) that God, Exalted Be His Praise, when He created all creatures and brought all things into being, arranged them and brought them into existence by a process similar to the process of generation of numbers from one, so that the multiplicity [of numbers] should be a witness to his Oneness, and their classification and order an indication of the perfection of His wisdom in creation. And this would be a witness to the fact, too, that they [creatures] are related to Him who created them, in the same way as the numbers are related to the One which is prior to two, and which is the principle, origin and source of numbers, as we have shown in our treatise on arithmetic.

Man may be excused for feeling some pride at having risen, though not through his own exertions, to the very summit of the organic scale; and the fact of his having thus risen, instead of having been aboriginally placed there, may give him hopes for a still higher destiny in the distant future. But we are not here concerned with hopes or fears, only with the truth as far as our reason allows us to discover it. I have given the evidence to the best of my ability; and we must acknowledge, as it seems to me, that man with all his noble qualities, with sympathy which feels for the most debased, with benevolence which extends not only to other men but to the humblest living creature, with his god-like intellect which has penetrated into the movements and constitution of the solar system—with all these exalted powers—Man still bears in his bodily frame the indelible stamp of his lowly origin.

Men have called me mad; but the question is not yet settled, whether madness is or is not the loftiest intelligenceâ€”whether much that is gloriousâ€”whether all that is profoundâ€”does not spring from disease of thoughtâ€”from moods of mind exalted at the expense of the general intellect.

Natural science is founded on minute critical views of the general order of events taking place upon our globe, corrected, enlarged, or exalted by experiments, in which the agents concerned are placed under new circumstances, and their diversified properties separately examined. The body of natural science, then, consists of facts; is analogy,â€”the relation of resemblance of facts by which its different parts are connected, arranged, and employed, either for popular use, or for new speculative improvements.

Simple as the law of gravity now appears, and beautifully in accordance with all the observations of past and of present times, consider what it has cost of intellectual study. Copernicus, Galileo, Kepler, Euler, Lagrange, Laplace, all the great names which have exalted the character of man, by carrying out trains of reasoning unparalleled in every other science; these, and a host of others, each of whom might have been the Newton of another field, have all labored to work out, the consequences which resulted from that single law which he discovered. All that the human mind has producedâ€”the brightest in genius, the most persevering in application, has been lavished on the details of the law of gravity.

Since the discovery of secret things and in the investigation of hidden causes, stronger reasons are obtained from sure experiments and demonstrated arguments than from probable conjectures and the opinions of philosophical speculators of the common sort; therefore to the end that the noble substance of that great loadstone, our common mother (the earth), still quite unknown, and also the forces extraordinary and exalted of this globe may the better be understood, we have decided first to begin with the common stony and ferruginous matter, and magnetic bodies, and the parts of the earth that we may handle and may perceive with the senses; then to proceed with plain magnetic experiments, and to penetrate to the inner parts of the earth.

On the Loadstone and Magnetic Bodies and on the Great Magnet the Earth: A New Physiology, Demonstrated with many Arguments and Experiments (1600), trans. P. Fleury Mottelay (1893), Authorâ€™s Preface, xlvii.

Surely the immutable laws of the universe can teach more impressive and exalted lessons than the holy books of all the religions on earth.

The prohibition of science would be contrary to the Bible, which in hundreds of places teaches us how the greatness and the glory of God shine forth marvelously in all His works, and is to be read above all in the open book of the heavens. And let no one believe that the reading of the most exalted thoughts which are inscribed upon these pages is to be accomplished through merely staring up at the radiance of the stars. There are such profound secrets and such lofty conceptions that the night labors and the researches of hundreds and yet hundreds of the keenest minds, in investigations extending over thousands of years would not penetrate them, and the delight of the searching and finding endures forever.

The psychoanalysis of individual human beings, however, teaches us with quite special insistence that the god of each of them is formed in the likeness of his father, that his personal relation to God depends on his relation to his father in the flesh and oscillates and changes along with that relation, and that at bottom God is nothing other than an exalted father.

The recurrence of a phenomenon like Edison is not very likely. The profound change of conditions and the ever increasing necessity of theoretical training would seem to make it impossible. He will occupy a unique and exalted position in the history of his native land, which might well be proud of his great genius and undying achievements in the interest of humanity.

There are many things akin to highest deity that are still obscure. Some may be too subtle for our powers of comprehension, others imperceptible to us because such exalted majesty conceals itself in the holiest part of its sanctuary, forbidding access to any power save that of the spirit. How many heavenly bodies revolve unseen by human eye!

To one, science is an exalted goddess; to another it is a cow which provides him with butter.

When I quitted business and took to science as a career, I thought I had left behind me all the petty meannesses and small jealousies which hinder man in his moral progress; but I found myself raised into another sphere, only to find poor human nature just the same everywhereâ€”subject to the same weaknesses and the same self-seeking, however exalted the intellect.

As quoted â€śas well as I can recollectâ€ť by Mrs. Cornelia Crosse, wife of the scientist Andrew Crosse. She was with him during a visit by Andrew to see his friend Faraday at the Royal Institution, and she had some conversation with him. This was Faradayâ€™s reply to her comment that he must be happy to have elevated himself (presumably, from his apprenticeship as a bookbinder) above all the â€śmeaner aspects and lower aims of common life.â€ť As stated in John Hall Gladstone, Michael Faraday (1872), 117.

When two people are under the influence of the most violent, most insane, most delusive, and most transient of passions, they are required to swear that they will remain in that exalted, abnormal, and exhausting condition continuously until death do them part.