Children are told that an apple fell on Isaac Newtons head and he was led to state the law of gravity. This, of course, is pure foolishness. What Newton discovered was that any two particles in the universe attract each other with a force that is proportional to the product of their masses and inversely proportional to the square of the distance between them. This is not learned from a falling apple, but by observing quantities of data and developing a mathematical theory that can be verified by additional data. Data gathered by Galileo on falling bodies and by Johannes Kepler on motions of the planets were invaluable aids to Newton. Unfortunately, such false impressions about science are not universally outgrown like the Santa Claus myth, and some people who dont study much science go to their graves thinking that the human race took until the mid-seventeenth century to notice that objects fall.

In the beginning of the year 1665 I found the Method of approximating series & the Rule for reducing any dignity of any Bionomial into such a series. The same year in May I found the method of Tangents of Gregory & Slusius, & in November had the direct method of fluxions & the next year in January had the Theory of Colours & in May following I had entrance into ye inverse method of fluxions. And the same year I began to think of gravity extending to ye orb of the Moon & (having found out how to estimate the force with wch [a] globe revolving within a sphere presses the surface of the sphere) from Keplers rule of the periodic times of the Planets being in sesquialterate proportion of their distances from the center of their Orbs, I deduced that the forces wch keep the Planets in their Orbs must [be] reciprocally as the squares of their distances from the centers about wch they revolve: & thereby compared the force requisite to keep the Moon in her Orb with the force of gravity at the surface of the earth, & found them answer pretty nearly. All this was in the two plague years of 1665-1666. For in those days I was in the prime of my age for invention & minded Mathematicks & Philosophy more then than at any time since.

In the celestial spaces above the Earths atmosphere; in which spaces, where there is no air to resist their motions, all bodies will move with the greatest freedom; and the Planets and Comets will constantly pursue their revolutions in orbits  by the mere laws of gravity.

It is interesting to contemplate an entangled bank, clothed with many plants of many kinds, with birds singing on the bushes, with various insects flitting about, and with worms crawling through the damp earth, and to reflect that these elaborately constructed forms, so different from each other, and dependent on each other in so complex a manner, have all been produced by laws acting around us. These laws, taken in the largest sense, being Growth with Reproduction; Inheritance which is almost implied by reproduction; Variability from the indirect and direct action of the external conditions of life, and from use and disuse; a Ratio of Increase so high as to lead to a Struggle for Life, and as a consequence to Natural Selection, entailing Divergence of Character and the Extinction of less-improved forms. Thus, from the war of nature, from famine and death, the most exalted object which we are capable of conceiving, namely, the production of the higher animals, directly follows. There is grandeur in this view of life, with its several powers, having been originally breathed into a few forms or into one; and that, whilst this planet has gone cycling on according to the fixed law of gravity, from so simple a beginning endless forms most beautiful and most wonderful have been, and are being, evolved.

Concluding remarks in final chapter, The Origin of Species (1859), 490. In the second edition, Darwin changed breathed to breathed by the Creator.

It seems as though no laws, not even fairly old ones, can safely be regarded as unassailable. The force of gravity, which we have always ascribed to the pull of the earth, was reinterpreted the other day by a scientist who says that when we fall it is not earth pulling us, it is heaven pushing us. This blasts the rock on which we sit. If science can do a rightabout-face on a thing as fundamental as gravity, maybe Newton was a sucker not to have just eaten the apple.

People do more talking than listening: under the law of gravity, it takes more energy to shut one's mouth than to open it.

Simple as the law of gravity now appears, and beautifully in accordance with all the observations of past and of present times, consider what it has cost of intellectual study. Copernicus, Galileo, Kepler, Euler, Lagrange, Laplace, all the great names which have exalted the character of man, by carrying out trains of reasoning unparalleled in every other science; these, and a host of others, each of whom might have been the Newton of another field, have all labored to work out, the consequences which resulted from that single law which he discovered. All that the human mind has producedthe brightest in genius, the most persevering in application, has been lavished on the details of the law of gravity.

Some men who call themselves pessimists because they cannot read good into the operations of nature forget that they cannot read evil. In morals the law of competition no more justifies personal, official, or national selfishness or brutality than the law of gravity justifies the shooting of a bird.

The child which overbalances itself in learning to walk is experimenting on the law of gravity.

The floating vapour is just as true an illustration of the law of gravity as the falling avalanche.

Thus far I have explained the phenomena of the heavens and of our sea by the force of gravity, but I have not yet assigned a cause to gravity. Indeed, this force arises from some cause that penetrates as far as the centers of the sun and planets without any diminution of its power to act, and that acts not in proportion to the quantity of the surfaces of the particles on which it acts (as mechanical causes are wont to do) but in proportion to the quantity of solid matter, and whose action is extended everywhere to immense distances, always decreasing as the squares of the distances.

Thus the system of the world only oscillates around a mean state from which it never departs except by a very small quantity. By virtue of its constitution and the law of gravity, it enjoys a stability that can be destroyed only by foreign causes, and we are certain that their action is undetectable from the time of the most ancient observations until our own day. This stability in the system of the world, which assures its duration, is one of the most notable among all phenomena, in that it exhibits in the heavens the same intention to maintain order in the universe that nature has so admirably observed on earth for the sake of preserving individuals and perpetuating species. 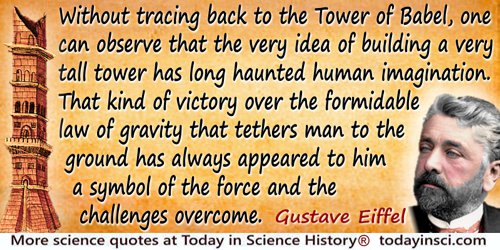 Without tracing back to the Tower of Babel, one can observe that the very idea of building a very tall tower has long haunted human imagination. That kind of victory over the formidable law of gravity that tethers man to the ground has always appeared to him a symbol of the force and the challenges overcome.