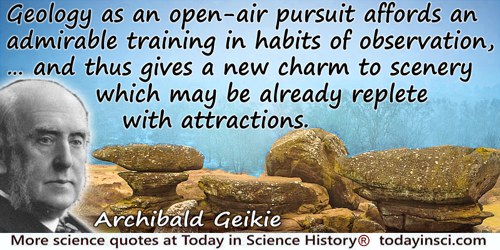 Apart from its healthful mental training as a branch of ordinary education, geology as an open-air pursuit affords an admirable training in habits of observation, furnishes a delightful relief from the cares and routine of everyday life, takes us into the open fields and the free fresh face of nature, leads us into all manner of sequestered nooks, whither hardly any other occupation or interest would be likely to send us, sets before us problems of the highest interest regarding the history of the ground beneath our feet, and thus gives a new charm to scenery which may be already replete with attractions.

For the most part we humans live with the false impression of security and a feeling of being at home in a seemingly trustworthy physical and human environment. But when the expected course of everyday life is interrupted, we are like shipwrecked people on a miserable plank in the open sea, having forgotten where they came from and not knowing whither they are drifting. But once we fully accept this, life becomes easier and there is no longer any disappointment.

I believe with Schopenhauer that one of the strongest motives that lead men to art and science is escape from everyday life with its painful crudity and hopeless dreariness, from the fetters of oneâ€™s own ever shifting desires. A finely tempered nature longs to escape from personal life into the world of objective perception and thought; this desire may be compared with the townsmanâ€™s irresistible longing to escape from his noisy, cramped surroundings into the silence of high mountains, where the eye ranges freely through the still, pure air and fondly traces out the restful contours apparently built for eternity.

Address at The Physical Society, Berlin (1918) for Max Planckâ€™s 60th birthday, 'Principles of Research', collected in Essays in Science (1934) 2.

Nothing in physics seems so hopeful to as the idea that it is possible for a theory to have a high degree of symmetry was hidden from us in everyday life. The physicist's task is to find this deeper symmetry.

One of the grandest generalizations formulated by modern biological science is that of the continuity of life; the protoplasmic activity within each living body now on earth has continued without cessation from the remote beginnings of life on our planet, and from that period until the present no single organism has ever arisen save in the form of a bit of living protoplasm detached from a pre-existing portion; the eternal flame of life once kindled upon this earth has passed from organism to organism, and is still, going on existing and propagating, incarnated within the myriad animal and plant forms of everyday life.

One of the strongest motives that lead men to art and science is escape from everyday life with its painful crudity and hopeless dreariness, from the fetters of one's own ever-shifting desires. A finely tempered nature longs to escape from the personal life into the world of objective perception and thought.

This is true of all science. Successes were largely due to forgetting completely about what one ultimately wanted, or whether one wanted anything ultimately; in refusing to investigate things which profit, and in relying solely on guidance by criteria of intellectual elegance. â€¦ And I think it extremely instructive to watch the role of science in everyday life, and to note how in this area the principle of laissez faire has led to strange and wonderful results.

This notion that â€śscienceâ€ť is something that belongs in a separate compartment of its own, apart from everyday life, is one that I should like to challenge. We live in a scientific age; yet we assume that knowledge of science is the prerogative of only a small number of human beings, isolated and priest-like in their laboratories. This is not true. It cannot be true. The materials of science are the materials of life itself. Science is part of the reality of living; it is the what, the how, and the why of everything in our experience. It is impossible to understand man without understanding his environment and the forces that have molded him physically and mentally.

We already know the physical laws that govern everything we experience in everyday life â€¦ It is a tribute to how far we have come in theoretical physics that it now takes enormous machines and a great deal of money to perform an experiment whose results we cannot predict.

From Inaugural Lecture (29 Apr 1980) as Lucasian Professor at Cambridge University, 'Is the End in Sight for Theoretical Physics?', collected in Black Holes and Baby Universes and Other Essays (1993), 50 & 64. 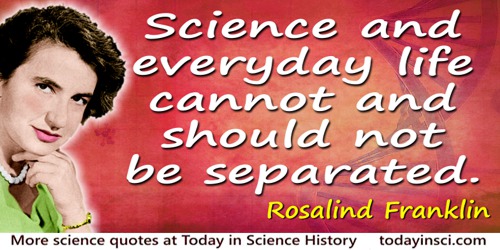 [At my secondary school] if you were very bright, you did classics; if you were pretty thick, you did woodwork; and if you were neither of those poles, you did science. The number of kids in my school who did science because they were excited by the notion of science was pretty small. You were allocated to those things, you werenâ€™t asked. This was in the late 1930s/early 1940s â€¦ Science was seen as something more remote and less to do with everyday life.