A noiseless, patient spider,
I markd, where on a little promontory, it stood, isolated;
Markd how, to explore the vacant, vast surrounding,
It launchd forth filament, filament, filament, out of itself
Ever unreeling themever tirelessly speeding them. 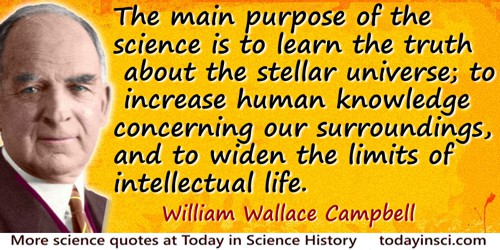 It is of priceless value to the human race to know that the sun will supply the needs of the earth, as to light and heat, for millions of years; that the stars are not lanterns hung out at night, but are suns like our own; and that numbers of them probably have planets revolving around them, perhaps in many cases with inhabitants adapted to the conditions existing there. In a sentence, the main purpose of the science is to learn the truth about the stellar universe; to increase human knowledge concerning our surroundings, and to widen the limits of intellectual life.

It is probable that serum acts on bacteria by changing the relations of molecular attraction between the bacteria and the surrounding fluid.

Science has explained nothing; the more we know the more fantastic the world becomes and the profounder the surrounding darkness.

Science is but a feeble means for motivating life. It enlightens men, but fails to arouse them to deeds of self-sacrifice and devotion.  It dispels ignorance, but it never launched a crusade. It gives aid in the struggle with the hard surroundings of life, but it does not inform us to what end we struggle, or whether the struggle is worth while.  Intelligence can do little more than direct.

'What Knowledge is of Most Worth'. Lectures in Education delivered at the Royal Institution (1855). In The Westminster Review (Jul 1859), 22. Collected in Essays on Education and Kindred Subjects (1911), 41.

Take the rosemost people think it very beautiful: I dont care for It at all. I prefer the cactus, for the simple reason that it has a more interesting personality. It has wonderfully adapted itself to its surroundings! It is the best illustration of the theory of evolution in plant life.

The growing complexity of civilized life demands with each age broader and more exact knowledge as to the material surroundings and greater precision in our recognition of the invisible forces or tendencies about us.

From Presidential Address (5 Dec 1896) to the Biological Society of Washington, 'The Malarial Parasite and Other Pathogenic Protozoa', Popular Science Monthly (Mar 1897), 642.