A noiseless, patient spider,
I markd, where on a little promontory, it stood, isolated;
Markd how, to explore the vacant, vast surrounding,
It launchd forth filament, filament, filament, out of itself
Ever unreeling themever tirelessly speeding them.

All knowledge is profitable; profitable in its ennobling effect on the character, in the pleasure it imparts in its acquisition, as well as in the power it gives over the operations of mind and of matter. All knowledge is useful; every part of this complex system of nature is connected with every other. Nothing is isolated. The discovery of to-day, which appears unconnected with any useful process, may, in the course of a few years, become the fruitful source of a thousand inventions.

In 'Report of the Secretary', Sixth Annual Report of the Board of Regents of the Smithsonian Institution for 1851 (1852), 10.

Earth-worms  inhabit the most isolated islands; they abound in Iceland, and are known to exist in the West Indies, St. Helena, Madagascar, New Caledonia and Tahiti. In the Antarctic regions, worms from Kerguelen Land have been described  and I found them in the Falkland Islands.

In The Formation of Vegetable Mould Through the Action of Worms, With Some Observations on Their Habits. (1881), 121-122.

I trust ... I have succeeded in convincing you that modern chemistry is not, as it has so long appeared, an ever-growing accumulation of isolated facts, as impossible for a single intellect to co-ordinate as for a single memory to grasp.
The intricate formulae that hang upon these walls, and the boundless variety of phenomena they illustrate, are beginning to be for us as a labyrinth once impassable, but to which we have at length discovered the clue. A sense of mastery and power succeeds in our minds to the sort of weary despair with which we at first contemplated their formidable array. For now, by the aid of a few general principles, we find ourselves able to unravel the complexities of these formulae, to marshal the compounds which they represent in orderly series; nay, even to multiply their numbers at our will, and in a great measure to forecast their nature ere we have called them into existence. It is the great movement of modern chemistry that we have thus, for an hour, seen passing before us. It is a movement as of light spreading itself over a waste of obscurity, as of law diffusing order throughout a wilderness of confusion, and there is surely in its contemplation something of the pleasure which attends the spectacle of a beautiful daybreak, something of the grandeur belonging to the conception of a world created out of chaos. 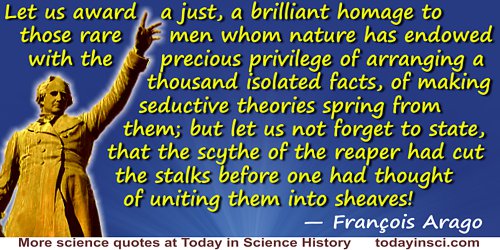 Nothing in the whole system of nature is isolated or unimportant. The fall of a leaf and the motion of a planet are governed by the same laws.  It is in the study of objects considered trivial and unworthy of notice by the casual observer that genius finds the most important and interesting phenomena. It was in the investigation of the varying colors of the soap-bubble that Newton detected the remarkable fact of the fits of easy reflection and easy refraction presented by a ray of light in its passage through space, and upon which he established the fundamental principle of the present generalization of the undulatory theory of light.  The microscopic organization of animals and plants is replete with the highest instruction; and, surely, in the language of one of the fathers of modern physical science, nothing can be unworthy of being investigated by man which was thought worthy of being created by GOD.

In 'Report of the Secretary', Seventh Annual Report of the Board of Regents of the Smithsonian Institution for 1852 (1853), 15.

On all levels primary, and secondary and undergraduate - mathematics is taught as an isolated subject with few, if any, ties to the real world. To students, mathematics appears to deal almost entirely with things whlch are of no concern at all to man.

In editorial in Focus, a Journal of the Mathematical Association of America (1986), quoted in obituary by Eric Pace, New York Times (11 Jun 1992).

Placed in a universe of constant change, on an isolated globe surrounded by distant celestial objects on all sides, subjected to influences of various kinds, it is a sublime occupation to measure the earth and weigh the planets, to predict their changes, and even to discover the materials of which they are composed; to investigate the causes of the tempest and volcano; to bring the lightning from the clouds; to submit it to experiment by which it shall reveal its character; and to estimate the size and weight of those invisible atoms which constitute the universe of things. 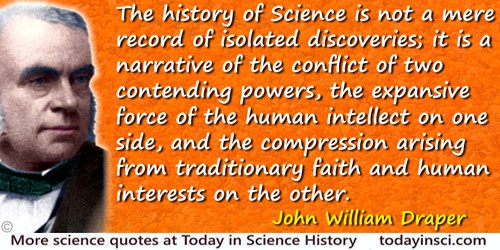 The history of Science is not a mere record of isolated discoveries; it is a narrative of the conflict of two contending powers, the expansive force of the human intellect on one side, and the compression arising from traditionary faith and human interests on the other.

In History of the Conflict Between Religion and Science (1875), vi.

The human species was born when one isolated group of bipedal apes got itself stuck and then speciated to get better survival value out of eating meat.

The most intensely social animals can only adapt to group behavior. Bees and ants have no option when isolated, except to die. There is really no such creature as a single individual; he has no more life of his own than a cast off cell marooned from the surface of your skin.

Tragically isolated, imprisoned in his own self, man has made a desperate effort to leap beyond his shadow, to embrace the external world. From this effort was born science.

In Einstein and the Universe; A Popular Exposition of the Famous Theory (1922), 239.

What is peculiar and new to the [19th] century, differentiating it from all its predecessors, is its technology. It was not merely the introduction of some great isolated inventions. It is impossible not to feel that something more than that was involved.  The process of change was slow, unconscious, and unexpected. In the nineteeth century, the process became quick, conscious, and expected.  The whole change has arisen from the new scientific information. Science, conceived not so much in its principles as in its results, is an obvious storehouse of ideas for utilisation.  Also, it is a great mistake to think that the bare scientific idea is the required invention, so that it has only to be picked up and used. An intense period of imaginative design lies between. One element in the new method is just the discovery of how to set about bridging the gap between the scientific ideas, and the ultimate product. It is a process of disciplined attack upon one difficulty after another This discipline of knowledge applies beyond technology to pure science, and beyond science to general scholarship. It represents the change from amateurs to professionals.  But the full self-conscious realisation of the power of professionalism in knowledge in all its departments, and of the way to produce the professionals, and of the importance of knowledge to the advance of technology, and of the methods by which abstract knowledge can be connected with technology, and of the boundless possibilities of technological advance,the realisation of all these things was first completely attained in the nineteeth century.