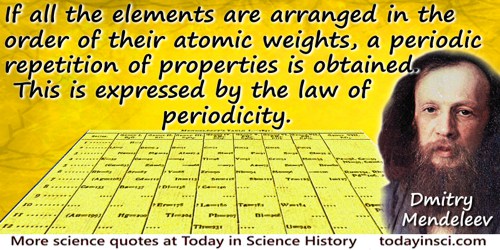 As a second year high school chemistry student, I still have a vivid memory of my excitement when I first saw a chart of the periodic table of elements. The order in the universe seemed miraculous, and I wanted to study and learn as much as possible about the natural sciences.

For example, there are numbers of chemists who occupy themselves exclusively with the study of dyestuffs. They discover facts that are useful to scientific chemistry; but they do not rank as genuine scientific men. The genuine scientific chemist cares just as much to learn about erbiumthe extreme rarity of which renders it commercially unimportantas he does about iron. He is more eager to learn about erbium if the knowledge of it would do more to complete his conception of the Periodic Law, which expresses the mutual relations of the elements.

For me too, the periodic table was a passion. ... As a boy, I stood in front of the display for hours, thinking how wonderful it was that each of those metal foils and jars of gas had its own distinct personality.
[Referring to the periodic table display in the Science Museum, London, with element samples in bottles]

I have presented the periodic table as a kind of travel guide to an imaginary country, of which the elements are the various regions. This kingdom has a geography: the elements lie in particular juxtaposition to one another, and they are used to produce goods, much as a prairie produces wheat and a lake produces fish. It also has a history. Indeed, it has three kinds of history: the elements were discovered much as the lands of the world were discovered; the kingdom was mapped, just as the world was mapped, and the relative positions of the elements came to take on a great significance; and the elements have their own cosmic history, which can be traced back to the stars.

In The Periodic Kingdom: A Journey Into the Land of the Chemical Elements (1995), Preface, viii.

If all the elements are arranged in the order of their atomic weights, a periodic repetition of properties is obtained. This is expressed by the law of periodicity.

My attitude was: Just look at all the interesting atoms in that region of the periodic table; certainly the reason that carbon dominates chemistry is our own ignorance.

Recollection of being unimpressed in high school when taught that carbon, being the basic building block of life, was the most important element in the periodic table. In Chappell Brown, 'A Carbon Copy of the Real Thing', Electronic Engineering Times (28 Dec 1998), 50.

One of the great triumphs of 20th Century astrophysics, was tracing the elements of your body, of all the elements around us, to the actions of starsthat crucible in the centers of stars that cooked basic elements into heavier elements, light elements into heavy elements. (I say cookedI mean thermonuclear fusion.) The heat brings them together, gets you bigger atoms, that then do other interesting chemical things, fleshing out the contents of the Periodic Table.

From interview, The Science Studio video series of The Science Network website, episode 'The Moon, the Tides and why Neil DeGrasse Tyson is Colberts God' (20 Jan 2011), time 20:53-21:25.

The eighth element, starting from a given one, is a kind of repetition of the first, like the eighth note of an octave in music.

The general disposition of the land [in the Periodic Kingdom] is one of metals in the west, giving way, as you travel eastward, to a varied landscape of nonmetals, which terminates in largely inert elements at the eastern shoreline. To the south of the mainland, there is an offshore island, which we shall call the Southern Island. It consists entirely of metals of subtly modulated personality. North of the mainland, situated rather like Iceland off the northwestern edge of Europe, lies a single, isolated region-hydrogen. This simple but gifted element is an essential outpost of the kingdom, for despite its simplicity it is rich in chemical personality. It is also the most abundant element in the universe and the fuel of the stars.

In The Periodic Kingdom: A Journey Into the Land of the Chemical Elements (1995), 9.

The same algebraic sum of positive and negative charges in the nucleus, when the arithmetical sum is different, gives what I call isotopes or isotopic elements, because they occupy the same place in the periodic table. They are chemically identical, and save only as regards the relatively few physical properties which depend upon atomic mass directly, physically identical also. Unit changes of this nuclear charge, so reckoned algebraically, give the successive places in the periodic table. For any one place or any one nuclear charge, more than one number of electrons in the outer-ring system may exist, and in such a case the element exhibits variable valency. But such changes of number, or of valency, concern only the ring and its external environment. There is no in- and out-going of electrons between ring and nucleus.

Those of us who were familiar with the state of inorganic chemistry in universities twenty to thirty years ago will recall that at that time it was widely regarded as a dull and uninteresting part of the undergraduate course. Usually, it was taught almost entirely in the early years of the course and then chiefly as a collection of largely unconnected facts. On the whole, students concluded that, apart from some relationships dependent upon the Periodic table, there was no system in inorganic chemistry comparable with that to be found in organic chemistry, and none of the rigour and logic which characterised physical chemistry. It was widely believed that the opportunities for research in inorganic chemistry were few, and that in any case the problems were dull and uninspiring; as a result, relatively few people specialized in the subject... So long as inorganic chemistry is regarded as, in years gone by, as consisting simply of the preparations and analysis of elements and compounds, its lack of appeal is only to be expected. The stage is now past and for the purpose of our discussion we shall define inorganic chemistry today as the integrated study of the formation, composition, structure and reactions of the chemical elements and compounds, excepting most of those of carbon. 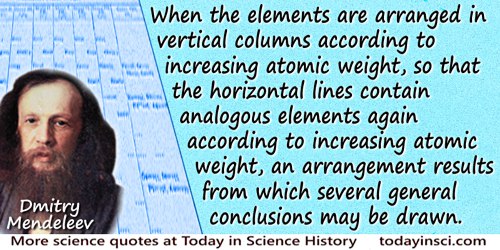 'The Relations of the Properties to the Atomic Weights of the Elements', Zeitschrift fur Chemie, 1869.

Why we love science. Its more than a school subject, or the periodic table, or the properties of waves. It is an approach to the world, a critical way to understand and explore and engage with the world, and then have the capacity to change that world, and to share this accumulated knowledge. Its a mindset that says we that can use reason and logic and honest inquiry to reach new conclusions and solve big problems.

From remarks at the fifth White House Science Fair, in Press Release (23 Mar 2015).

Without preparing fluorine, without being able to separate it from the substances with which it is united, chemistry has been able to study and to analyze a great number of its compounds. The body was not isolated, and yet its place was marked in our classifications. This well demonstrates the usefulness of a scientific theory, a theory which is regarded as true during a certain time, which correlates facts and leads the mind to new hypotheses, the first causes of experimentation; which, little by little, destroy the theory itself, in order to replace it by another more in harmony with the progress of science.
[Describing the known history of fluorine compounds before his isolation of the element.]

You can find that sort of regularity in Stock Exchange quotations.
[Expressing his lack of confidence in reported regularities in the periodic classification of elements.]

As quoted in Stanley I. Levy, 'Brauner Memorial Lecture', Journal of the Chemical Society (1935), Pt. 2, 1878. It has also been quoted as One might just as well seek regularities in the figures of stock exchange bulletins in L. Vlasov and D. Trifonov, trans. from Russian by David Sobolev, 107 Stories About Chemistry (1970).

[This] may prove to be the beginning of some embracing generalization, which will throw light, not only on radioactive processes, but on elements in general and the Periodic Law.... Chemical homogeneity is no longer a guarantee that any supposed element is not a mixture of several of different atomic weights, or that any atomic weight is not merely a mean number.

From Chemical Society's Annual Reports (1910), Vol. 7, 285. As quoted in Francis Aston in Lecture (1936) on 'Forty Years of Atomic Theory', collected in Needham and Pagel (eds.) in Background to Modern Science: Ten Lectures at Cambridge Arranged by the History of Science Committee, (1938), 100. Cited in Alfred Walter Stewart, Recent Advances in Physical and Inorganic Chemistry (1920), 198.