A quotation without a reference is like a geological specimen of unknown locality. 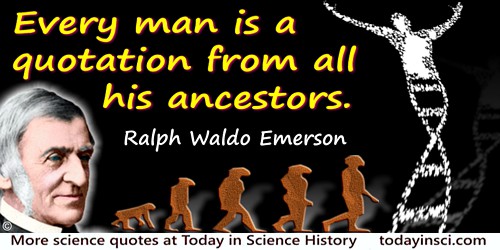 As quoted in obituary for Richard Hamming, by Herschel H. Loomis and David S. Potter, in National Academy of Engineering, Memorial Tributes (2002), 123.

Immortality. I notice that as soon as writers broach this question they begin to quote. I hate quotation. Tell me what you know. May 1849:

It has just occurred to me to ask if you are familiar with Lissajous experiments. I know nothing about them except what I found in Flammarions great Astronomie Populaire. One extraordinary chapter on numbers gives diagrams of the vibrations of harmonicsshowing their singular relation to the geometrical designs of crystal-formation;and the chapter is aptly closed by the Pythagorian quotation: Ἀεὶ ὁ θεὸς ὁ μέγας γεωμετρεῖGod geometrizes everywhere.  I should imagine that the geometry of a fine opera wouldwere the vibrations outlined in similar fashionoffer a network of designs which for intricate beauty would double discount the arabesque of the Alhambra.

It is a good thing from an uneducated man to read books of quotations.

It may be appropriate to quote a statement of Poincare, who said (partly in jest no doubt) that there must be something mysterious about the normal law since mathematicians think it is a law of nature whereas physicists are convinced that it is a mathematical theorem.

It needs no dictionary of quotations to remind me that the eyes are the windows of the soul.

It was his [Leibnitzs] love of method and order, and the conviction that such order and harmony existed in the real world, and that our success in understanding it depended upon the degree and order which we could attain in our own thoughts, that originally was probably nothing more than a habit which by degrees grew into a formal rule. This habit was acquired by early occupation with legal and mathematical questions. We have seen how the theory of combinations and arrangements of elements had a special interest for him. We also saw how mathematical calculations served him as a type and model of clear and orderly reasoning, and how he tried to introduce method and system into logical discussions, by reducing to a small number of terms the multitude of compound notions he had to deal with. This tendency increased in strength, and even in those early years he elaborated the idea of a general arithmetic, with a universal language of symbols, or a characteristic which would be applicable to all reasoning processes, and reduce philosophical investigations to that simplicity and certainty which the use of algebraic symbols had introduced into mathematics.
A mental attitude such as this is always highly favorable for mathematical as well as for philosophical investigations. Wherever progress depends upon precision and clearness of thought, and wherever such can be gained by reducing a variety of investigations to a general method, by bringing a multitude of notions under a common term or symbol, it proves inestimable. It necessarily imports the special qualities of numberviz., their continuity, infinity and infinite divisibilitylike mathematical quantitiesand destroys the notion that irreconcilable contrasts exist in nature, or gaps which cannot be bridged over. Thus, in his letter to Arnaud, Leibnitz expresses it as his opinion that geometry, or the philosophy of space, forms a step to the philosophy of motioni.e., of corporeal thingsand the philosophy of motion a step to the philosophy of mind.

In Leibnitz (1884), 44-45. [The first sentence is reworded to better introduce the quotation. Webmaster]

Lord Northampton made a very apt quotation on the reading of Captain Denham's paper on the deposits in the Mersey, It appears, said his lordship, that the quality of Mersey is not strained.

There ought to be something about computers and artificial intelligence [in Bartlett's Familiar Quotations]. Surely somebody somewhere said something memorable.

Thou, O God, dost sell unto us all good things at the price of labour.
Quotation credited to Leonardo da Vinci that she chose for her bookplate, and which reflects her outlook on her work.

To illustrate the apparent contrast between statistics and truth  may I quote a remark I once overheard: There are three kinds of lies: white lies, which are justifiable; common liesthese have no justification; and statistics. Our meaning is similar when we say: Anything can be proved by figures; or, modifying a well-known quotation from Goethe, with numbers all men may contend their charming systems to defend.

Truth is the daughter of time.
(Alice Stewarts favorite quotation)

Quoted in Gayle Jacoba Greene, The Woman Who Knew Too Much. The quote comes from the Notebooks of Leonardo da Vinci: Truth was the only daughter of Time.

We shall not cease from exploration
And the end of all our exploring
Will be to arrive where we started
And know the place for the first time.
This was a favorite quotation of John Bahcall, who used it in his presentation at the Neutrino 2000 conference.

We  find a number of quotations illustrating the use of the word [probability], most of them taken from philosophical works. I shall only refer to a few examples: The probable is something which lies midway between truth and error (Thomasius, 1688); An assertion, of which the contrary is not completely self-contradictory or impossible, is called probable (Reimarus). Kant says: That which, if it were held as truth, would be more than half certain, is called probable.

You can find that sort of regularity in Stock Exchange quotations.
[Expressing his lack of confidence in reported regularities in the periodic classification of elements.]

As quoted in Stanley I. Levy, 'Brauner Memorial Lecture', Journal of the Chemical Society (1935), Pt. 2, 1878. It has also been quoted as One might just as well seek regularities in the figures of stock exchange bulletins in L. Vlasov and D. Trifonov, trans. from Russian by David Sobolev, 107 Stories About Chemistry (1970).