...the need for a garden of rare palms and vines and ornamental trees and shrubs which would be near enough to a growing city to form a quiet place where children with their elders could peer, as it were, into those fascinating jungles and palm glades of the tropics which have for generations stimulated the imaginations of American youth.

Biology has become as unthinkable without gene-splicing techniques as sending an explorer into the jungle without a compass.
Magazine interview (1981); one year after becoming the first scientist to make bacteria produce a facsimile of human interferon.

But I believe that there is no philosophical high-road in science, with epistemological signposts. No, we are in a jungle and find our way by trial and error, building our road behind us as we proceed. We do not find signposts at cross-roads, but our own scouts erect them, to help the rest. 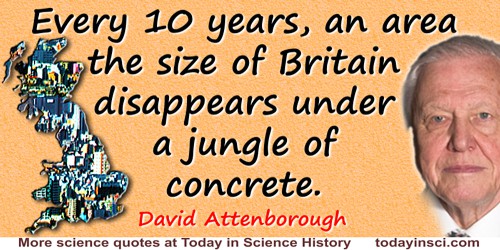 Every 10 years, an area the size of Britain disappears under a jungle of concrete.

As quoted from BBC TV series, Planet Earth II in Joe Shute, 'David Attenborough at 90: I think about my mortality every day', The Telegraph (29 Oct 2016).

For the past 10 years I have had the interesting experience of observing the development of Parkinson's syndrome on myself. As a matter of fact, this condition does not come under my special medical interests or I would have had it solved long ago.  The condition has its compensations: one is not yanked from interesting work to go to the jungles of Burma ... one avoids all kinds of deadly committee meetings, etc.

How many times did the sun shine, how many times did the wind howl over the desolate tundras, over the bleak immensity of the Siberian taigas, over the brown deserts where the Earths salt shines, over the high peaks capped with silver, over the shivering jungles, over the undulating forests of the tropics! Day after day, through infinite time, the scenery has changed in imperceptible features. Let us smile at the illusion of eternity that appears in these things, and while so many temporary aspects fade away, let us listen to the ancient hymn, the spectacular song of the seas, that has saluted so many chains rising to the light.

I am above the forest region, amongst grand rocks & such a torrent as you see in Salvator Rosa's paintings vegetation all a scrub of rhodods. with Pines below me as thick & bad to get through as our Fuegian Fagi on the hill tops, & except the towering peaks of P. S. [perpetual snow] that, here shoot up on all hands there is little difference in the mt sceneryhere however the blaze of Rhod. flowers and various colored jungle proclaims a differently constituted region in a naturalists eye & twenty species here, to one there, always are asking me the vexed question, where do we come from?

I used to worry that all the trees in the jungle would be cut down to make paper for their reports on how to save the rainforest!

Quoted in Binka Le Breton (1993), Voices From the Amazon (1993), 26. As cited in Lykke E. Andersen (ed.), The Dynamics of Deforestation and Economic Growth in the Brazilian Amazon (2002), 1, captioning Nick Birch as a Forester in Rondonia.

Most people regard scientists as explorers  Imagine a handful of people shipwrecked on a strange island and setting out to explore it. One of them cuts a solitary path through the jungle, going on and on until he is exhausted or lost or both. He eventually returns to his companions, and they listen to him with goggling eyes as he describes what he saw; what he fell into, and what bit him. After a rest he demands more supplies and sets off again to explore the unknown. Many of his companions will be doing the same, each choosing his own direction and pursuing his pioneering path.

One would like to see mankind spend the balance of the century in a total effort to clean up and groom the surface of the globe  wipe out the jungles, turn deserts and swamps into arable land, terrace barren mountains, regulate rivers, eradicate all pests, control the weather, and make the whole land mass a fit habitation for Man. The globe should be our and not natures home, and we no longer natures guests.

Right in the Hart of the Africn Jungel a small wite man lives. Now there is one xtrordenry fackt about him that he is the frind of all animals.

The problem of values arises only when men try to fit together their need to be social animals with their need to be free men. There is no problem, and there are no values, until men want to do both. If an anarchist wants only freedom, whatever the cost, he will prefer the jungle of man at war with man. And if a tyrant wants only social order, he will create the totalitarian state.

There is a strange disparity between the sciences of inert matter and those of life. Astronomy, mechanics, and physics are based on concepts which can be expressed, tersely and elegantly, in mathematical language. They have built up a universe as harmonious as the monuments of ancient Greece. They weave about it a magnificent texture of calculations and hypotheses. They search for reality beyond the realm of common thought up to unutterable abstractions consisting only of equations of symbols. Such is not the position of biological sciences. Those who investigate the phenomena of life are as if lost in an inextricable jungle, in the midst of a magic forest, whose countless trees unceasingly change their place and their shape. They are crushed under a mass of facts, which they can describe but are incapable of defining in algebraic equations.

There was wildlife, untouched, a jungle at the border of the sea, never seen by those who floated on the opaque roof.
Describing his early experience, in 1936, when a fellow naval officer, Philippe Tailliez, gave him goggles to see below the Mediterranean Sea surface. 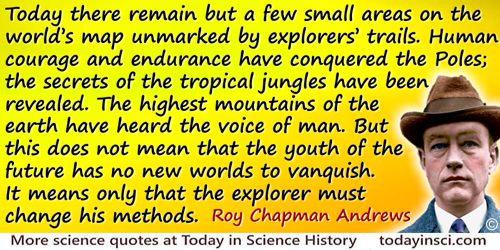 Today there remain but a few small areas on the worlds map unmarked by explorers trails. Human courage and endurance have conquered the Poles; the secrets of the tropical jungles have been revealed. The highest mountains of the earth have heard the voice of man. But this does not mean that the youth of the future has no new worlds to vanquish. It means only that the explorer must change his methods.

WEATHER, n. The climate of an hour. A permanent topic of conversation among persons whom it does not interest, but who have inherited the tendency to chatter about it from naked arboreal ancestors whom it keenly concerned. The setting up of official weather bureaus and their maintenance in mendacity prove that even governments are accessible to suasion by the rude forefathers of the jungle.

When the 1880s began. Maxwells theory was virtually a trackless jungle. By the second half of the decade, guided by the principle of energy flow. Poynting, FitzGerald, and above all Heaviside had succeeded in taming and pruning that jungle and in rendering it almost civilized.

Who could believe an ant in theory?
A giraffe in blueprint?
Ten thousand doctors of whats possible
Could reason half the jungle out of being.

In The Achievement of John Ciardi: A Comprehensive Selection of His Poems (1969), 73.