Biology has become as unthinkable without gene-splicing techniques as sending an explorer into the jungle without a compass.
Magazine interview (1981); one year after becoming the first scientist to make bacteria produce a facsimile of human interferon.

But if the heavens are moved by a daily movement, it is necessary to assume in the principal bodies of the universe and in the heavens two ways of movement which are contrary to each other: one from east to west and the other from west to east, as has often been said. And with this, it is proper to assume an excessively great speed, for anyone who reckons and considers well the height of distance of the heavens and the magnitude of these and of their circuit, if such a circuit were made in a day, could not imagine or conceive how marvelously and excessively swift would be the movement of the heavens, and how unbelievable and unthinkable.

In Isaac Asimov and Jason A. Shulman (eds.), Isaac Asimovs Book of Science and Nature Quotations (1988), 329. Webmaster so far has been unable to locate the primary source (can you help?)

For any one who is pervaded with the sense of causal law in all that happens, who accepts in real earnest the assumption of causality, the idea of a Being who interferes with the sequence of events in the world is absolutely impossible! Neither the religion of fear nor the social-moral religion can have, any hold on him. A God who rewards and punishes is for him unthinkable, because man acts in accordance with an inner and outer necessity, and would, in the eyes of God, be as little responsible as an inanimate object is for the movements which it makes. Science, in consequence, has been accused of undermining moralsbut wrongly. The ethical behavior of man is better based on sympathy, education and social relationships, and requires no support from religion. Mans plight would, indeed, be sad if he had to be kept in order through fear of punishment and hope of rewards after death.

From 'Religion and Science', The New York Times Magazine, (9 Nov 1930), 1. Article in full, reprinted in Edward H. Cotton (ed.), Has Science Discovered God? A Symposium of Modern Scientific Opinion (1931), 101. The wording differs significantly from the version collected in 'Religion And Science', Ideas And Opinions (1954), 39, giving its source as: Written expressly for the New York Times Magazine. Appeared there November 9, 1930 (pp. 1-4). The German text was published in the Berliner Tageblatt, November 11, 1930. This variant form of the quote from the book begins, The man who is thoroughly convinced of the universal operation of the law of causation. and is also on the Albert Einstein Quotes page on this website. As for why the difference, Webmaster speculates the book form editor perhaps used a revised translation from Einsteins German article.

If matter is not eternal, its first emergence into being is a miracle beside which all others dwindle into absolute insignificance. But, as has often been pointed out, the process is unthinkable; the sudden apocalypse of a material world out of blank nonentity cannot be imagined; its emergence into order out of chaos when “without form and void” of life, is merely a poetic rendering of the doctrine of its slow evolution. 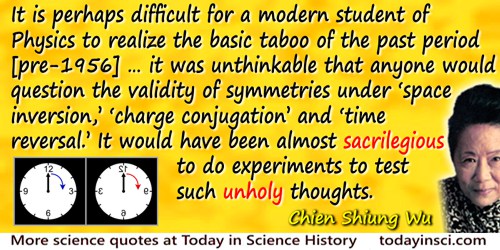 It is perhaps difficult for a modern student of Physics to realize the basic taboo of the past period (before 1956)  it was unthinkable that anyone would question the validity of symmetries under space inversion, charge conjugation and time reversal. It would have been almost sacrilegious to do experiments to test such unholy thoughts.

MAGNITUDE, n. Size. Magnitude being purely relative, nothing is large and nothing small. If everything in the universe were increased in bulk one thousand diameters nothing would be any larger than it was before, but if one thing remained unchanged all the others would be larger than they had been. To an understanding familiar with the relativity of magnitude and distance the spaces and masses of the astronomer would be no more impressive than those of the microscopist. For anything we know to the contrary, the visible universe may be a small part of an atom, with its component ions, floating in the life-fluid (luminiferous ether) of some animal. Possibly the wee creatures peopling the corpuscles of our own blood are overcome with the proper emotion when contemplating the unthinkable distance from one of these to another.

Science has taught us to think the unthinkable. Because when nature is the guiderather than a priori prejudices, hopes, fears or desireswe are forced out of our comfort zone. One by one, pillars of classical logic have fallen by the wayside as science progressed in the 20th century, from Einstein's realization that measurements of space and time were not absolute but observer-dependent, to quantum mechanics, which not only put fundamental limits on what we can empirically know but also demonstrated that elementary particles and the atoms they form are doing a million seemingly impossible things at once.