A man who keeps company with glaciers comes to feel tolerably insignificiant by and by. The Alps and the glaciers together are able to take every bit of conceit out of a man and reduce his self-importance to zero if he will only remain within the influence of their sublime presence long enough to give it a fair and reasonable chance to do its work.

All knowledge is good. It is impossible to say any fragment of knowledge, however insignificant or remote from ones ordinary pursuits, may not some day be turned to account.

'Address on University Education' (12 Sep 1876) delivered at the formal opening of the Johns Hopkins University at Baltimore. Collected in Science and Education: Essays (1897), 248.

Astronomy taught us our insignificance in Nature.

Behold a universe so immense that I am lost in it. I no longer know where I am. I am just nothing at all. Our world is terrifying in its insignificance.

In Etretiens sur la Pluralité des Mondes (Conversations with a Lady on the Plurality of Worlds) (1686) as cited in Edward Harrison, Cosmology: The Science of the Universe (2000), 162.

From a long view of the history of mankindseen from, say, ten thousand years from nowthere can be little doubt that the most significant event of the 19th century will be judged as Maxwells discovery of the laws of electrodynamics. The American Civil War will pale into provincial insignificance in comparison with this important scientific event of the same decade. 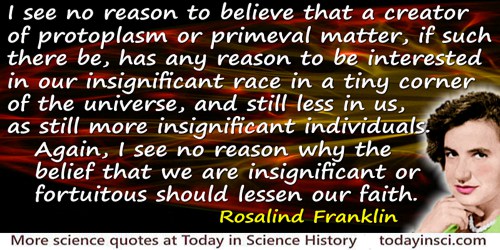 Letter to her father, Ellis Franklin, undated, perhaps summer 1940 while she was an undergraduate at Cambridge. Excerpted in Brenda Maddox, The Dark Lady of DNA (2002), 61.

If matter is not eternal, its first emergence into being is a miracle beside which all others dwindle into absolute insignificance. But, as has often been pointed out, the process is unthinkable; the sudden apocalypse of a material world out of blank nonentity cannot be imagined; its emergence into order out of chaos when “without form and void” of life, is merely a poetic rendering of the doctrine of its slow evolution.

If someone separated the art of counting and measuring and weighing from all the other arts, what was left of each (of the others) would be, so to speak, insignificant.

Measurement has too often been the leitmotif of many investigations rather than the experimental examination of hypotheses. Mounds of data are collected, which are statistically decorous and methodologically unimpeachable, but conclusions are often trivial and rarely useful in decision making. This results from an overly rigorous control of an insignificant variable and a widespread deficiency in the framing of pertinent questions. Investigators seem to have settled for what is measurable instead of measuring what they would really like to know.

Of the various anesthetics which have been introduced for surgical use, only two deserve to be considered, and in order of preference they are ether and chloroform. In general, there is no comparison between these agents. Ether is so much safer than chloroform that the latter is fast disappearing in practice. In the present rapid progress of science it can not but be a short while until chloroform will only he employed in a very limited number of cases. The estimated death-rate after ether is 1 in 20,000, in chloroform 1 in 3,000. All of the objections to ether by the advocates of chloroform narcosisnamely, its slowness of action, irritation of the respiratory tract, nausea and vomiting, inflammability, extra quantity required, etc.fade into insignificance when brought face to face with the fact that about seven lives are sacrificed by chloroform to one by ether. 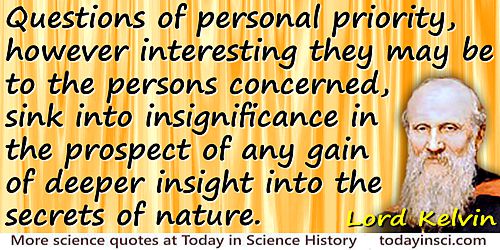 Questions of personal priority, however interesting they may be to the persons concerned, sink into insignificance in the prospect of any gain of deeper insight into the secrets of nature.

The subject may appear an insignificant one, but we shall see that it possesses some interest; and the maxim de minimis lex non curat [the law is not concerned with trifles] does not apply to science.

In The Formation of Vegetable Mould Through the Action of Worms, With Some Observations on Their Habits. (1881), 2.