A hundred times every day I remind myself that my inner and outer life depends on the labors of other men, living and dead, and that I must exert myself in order to give in the measure as I have received and am still receiving.

First, as concerns the success of teaching mathematics. No instruction in the high schools is as difficult as that of mathematics, since the large majority of students are at first decidedly disinclined to be harnessed into the rigid framework of logical conclusions. The interest of young people is won much more easily, if sense-objects are made the starting point and the transition to abstract formulation is brought about gradually. For this reason it is psychologically quite correct to follow this course.
Not less to be recommended is this course if we inquire into the essential purpose of mathematical instruction. Formerly it was too exclusively held that this purpose is to sharpen the understanding. Surely another important end is to implant in the student the conviction that correct thinking based on true premises secures mastery over the outer world. To accomplish this the outer world must receive its share of attention from the very beginning.
Doubtless this is true but there is a danger which needs pointing out. It is as in the case of language teaching where the modern tendency is to secure in addition to grammar also an understanding of the authors. The danger lies in grammar being completely set aside leaving the subject without its indispensable solid basis. Just so in Teaching of Mathematics it is possible to accumulate interesting applications to such an extent as to stunt the essential logical development. This should in no wise be permitted, for thus the kernel of the whole matter is lost. Therefore: We do want throughout a quickening of mathematical instruction by the introduction of applications, but we do not want that the pendulum, which in former decades may have inclined too much toward the abstract side, should now swing to the other extreme; we would rather pursue the proper middle course.

For any one who is pervaded with the sense of causal law in all that happens, who accepts in real earnest the assumption of causality, the idea of a Being who interferes with the sequence of events in the world is absolutely impossible! Neither the religion of fear nor the social-moral religion can have, any hold on him. A God who rewards and punishes is for him unthinkable, because man acts in accordance with an inner and outer necessity, and would, in the eyes of God, be as little responsible as an inanimate object is for the movements which it makes. Science, in consequence, has been accused of undermining moralsbut wrongly. The ethical behavior of man is better based on sympathy, education and social relationships, and requires no support from religion. Mans plight would, indeed, be sad if he had to be kept in order through fear of punishment and hope of rewards after death.

From 'Religion and Science', The New York Times Magazine, (9 Nov 1930), 1. Article in full, reprinted in Edward H. Cotton (ed.), Has Science Discovered God? A Symposium of Modern Scientific Opinion (1931), 101. The wording differs significantly from the version collected in 'Religion And Science', Ideas And Opinions (1954), 39, giving its source as: Written expressly for the New York Times Magazine. Appeared there November 9, 1930 (pp. 1-4). The German text was published in the Berliner Tageblatt, November 11, 1930. This variant form of the quote from the book begins, The man who is thoroughly convinced of the universal operation of the law of causation. and is also on the Albert Einstein Quotes page on this website. As for why the difference, Webmaster speculates the book form editor perhaps used a revised translation from Einsteins German article.

For they are, in truth, textbooks of life: they gather outer and inner experiences into a general and connected whole.

Genius, without religion, is only a lamp on the outer gate of a palace. It may serve to cast a gleam of light on those that are without while the inhabitant sits in darkness.

How strange is the lot of us mortals! Each of us is here for a brief sojourn; for what purpose he knows not, though he sometimes thinks he senses it. But without deeper reflection one knows from daily life that one exists for other peoplefirst of all for those upon whose smiles and well-being our own happiness is wholly dependent, and then for the many, unknown to us, to whose destinies we are bound by the ties of sympathy. A hundred times every day I remind myself that my inner and outer life are based on the labors of other men, living and dead, and that I must exert myself in order to give in the same measure as I have received and am still receiving.

Mathematic stands forth as that which unites, mediates between Man and Nature, Inner and Outer world, Thought and Perception, [as no other subject does].

The mystic and the physicist arrive at the same conclusion; one starting from the inner realm, the other from the outer world. The harmony between their views confirms the ancient Indian wisdom that Brahman, the ultimate reality without, is identical to Atman, the reality within. 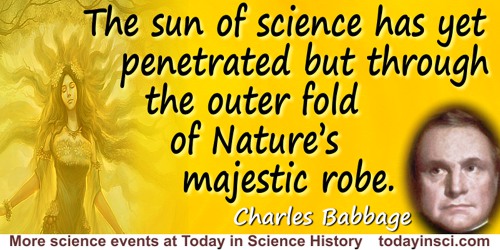 The sun of science has yet penetrated but through the outer fold of Natures majestic robe.

Though much new light is shed by ... studies in radioactivity, the nucleus of the atom, with its hoard of energy, thus continues to present us with a fascinating mystery. ... Our assault on atoms has broken down the outer fortifications. We feel that we know the fundamental rules according to which the outer part of the atom is built. The appearance and properties of the electron atmosphere are rather familiar. Yet that inner citadel, the atomic nucleus, remains unconquered, and we have reason to believe that within this citadel is secreted a great treasure. Its capture may form the main objective of the physicists next great drive.

We are told that Mathematics is that study which knows nothing of observation, nothing of experiment, nothing of induction, nothing of causation. I think no statement could have been made more opposite to the facts of the case; that mathematical analysis is constantly invoking the aid of new principles, new ideas, and new methods, not capable of being defined by any form of words, but springing direct from the inherent powers and activities of the human mind, and from continually renewed introspection of that inner world of thought of which the phenomena are as varied and require as close attention to discern as those of the outer physical world (to which the inner one in each individual man may, I think, be conceived to stand somewhat in the same relation of correspondence as a shadow to the object from which it is projected, or as the hollow palm of one hand to the closed fist which it grasps of the other), that it is unceasingly calling forth the faculties of observation and comparison, that one of its principal weapons is induction, that it has frequent recourse to experimental trial and verification, and that it affords a boundless scope for the exercise of the highest efforts of the imagination and invention.

just as the astronomer, the physicist, the geologist, or other student of objective science looks about in the world of sense, so, not metaphorically speaking but literally, the mind of the mathematician goes forth in the universe of logic in quest of the things that are there; exploring the heights and depths for factsideas, classes, relationships, implications, and the rest; observing the minute and elusive with the powerful microscope of his Infinitesimal Analysis; observing the elusive and vast with the limitless telescope of his Calculus of the Infinite; making guesses regarding the order and internal harmony of the data observed and collocated; testing the hypotheses, not merely by the complete induction peculiar to mathematics, but, like his colleagues of the outer world, resorting also to experimental tests and incomplete induction; frequently finding it necessary, in view of unforeseen disclosures, to abandon one hopeful hypothesis or to transform it by retrenchment or by enlargement:thus, in his own domain, matching, point for point, the processes, methods and experience familiar to the devotee of natural science.

nature seems very conversant with the rules of pure mathematics, as our own mathematicians have formulated them in their studies, out of their own inner consciousness and without drawing to any appreciable extent on their experience of the outer world.