Pieces almost always appear 'as parts' in whole processes. ... To sever a 'part from the organized whole in which it occurswhether it itself be a subsidiary whole or an elementis a very real process usually involving alterations in that part. Modifications of a part frequently involve changes elsewhere in the whole itself. Nor is the nature of these alterations arbitrary, for they too are determined by whole-conditions. 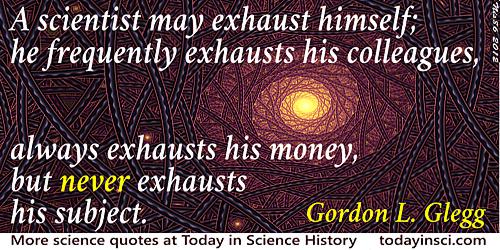 Although I must say that research problems I worked on were frequently the result of serendipity and often grew out of my interest in some species or some environment which I found to be particularly appealingmarine birds and tropical islands for example.

As few subjects are more interesting to society, so few have been more frequently written upon than the education of youth.

Error is often nourished by good sense.  The meaning is, that the powers of the understanding are frequently employed to defend favourite errors; and that a man of sense frequently fortifies himself in his prejudices, or in false opinions which he received without examination, by such arguments as would not have occurred to a fool.

In Maxims, Characters, and Reflections, Critical, Satyrical and Moral (2nd ed., 1757), 9. The meaning is given as a footnote.

Flaming enthusiasm, backed by horse sense and persistence, is the quality that most frequently makes for success.

Frequently, I have been asked if an experiment I have planned is pure or applied science; to me it is more important to know if the experiment will yield new and probably enduring knowledge about nature. If it is likely to yield such knowledge, it is, in my opinion, good fundamental research; and this is more important than whether the motivation is purely aesthetic satisfaction on the part of the experimenter on the one hand or the improvement of the stability of a high-power transistor on the other.

Quoted in Richard R. Nelson, 'The Link Between Science and Invention: The Case of the Transistor,' The Rate and Direction of the Inventive Activity (1962). In Daniel S. Greenberg, The Politics of Pure Science (1999), 32, footnote.

I really enjoy good murder mystery writers, usually women, frequently English, because they have a sense of what the human soul is about and why people do dark and terrible things. I also read quite a lot in the area of particle physics and quantum mechanics, because this is theology. This is about the nature of being. This is what life is all about. I try to read as widely as I possibly can.

In mathematics as in other fields, to find one self lost in wonder at some manifestation is frequently the half of a new discovery.

Is it possible that a promiscuous Jumble of Printing Letters should often fall into a Method and Order, which should stamp on Paper a coherent Discourse; or that a blind fortuitous Concourse of Atoms, not guided by an Understanding Agent, should frequently constitute the Bodies of any Species of Animals.

Occasionally and frequently the exercise of the judgment ought to end in absolute reservation. It may be very distasteful, and great fatigue, to suspend a conclusion; but as we are not infallible, so we ought to be cautious; we shall eventually find our advantage, for the man who rests in his position is not so far from right as he who, proceeding in a wrong direction, is ever increasing his distance.

Lecture at the Royal Institution, 'Observations on the Education of the Judgment'. Collected in Edward Livingston Youmans (ed)., Modern Culture (1867), 219.

The artist does not illustrate science;  [but] he frequently responds to the same interests that a scientist does, and expresses by a visual synthesis what the scientist converts into analytical formulae or experimental demonstrations.

The canyon country does not always inspire love. To many it appears barren, hostile, repellenta fearsome, mostly waterless land of rock and heat, sand dunes and quicksand. cactus, thornbush, scorpion, rattlesnake, and agoraphobic distances. To those who see our land in that manner, the best reply is, yes, you are right, it is a dangerous and terrible place. Enter at your own risk. Carry water. Avoid the noon-day sun. Try to ignore the vultures. Pray frequently.

We had various kinds of tape-recorded concerts and popular music. But by the end of the flight what we listened to most was Russian folk songs. We also had recordings of nature sounds: thunder, rain, the singing of birds. We switched them on most frequently of all, and we never grew tired of them. It was as if they returned us to Earth.

When a conjecture inspires new hopes or creates new fears, action is indicated. There is an important asymmetry between hope, which leads to actions that will test its basis, and fear, which leads to restriction of options frequently restricting testing of the basis for the fear. As we know only too well, many of our hopes do not survive their tests. However, fears accumulate untested. Our inventory of untested fears has always made humanity disastrously vulnerable to thought control. While science was independent of politics, its greatest triumph was the reduction of that vulnerability.

[Young] was afterwards accustomed to say, that at no period of his life was he particularly fond of repeating experiments, or even of very frequently attempting to originate new ones; considering that, however necessary to the advancement of science, they demanded a great sacrifice of time, and that when the fact was once established, that time was better employed in considering the purposes to which it might be applied, or the principles which it might tend to elucidate.

just as the astronomer, the physicist, the geologist, or other student of objective science looks about in the world of sense, so, not metaphorically speaking but literally, the mind of the mathematician goes forth in the universe of logic in quest of the things that are there; exploring the heights and depths for factsideas, classes, relationships, implications, and the rest; observing the minute and elusive with the powerful microscope of his Infinitesimal Analysis; observing the elusive and vast with the limitless telescope of his Calculus of the Infinite; making guesses regarding the order and internal harmony of the data observed and collocated; testing the hypotheses, not merely by the complete induction peculiar to mathematics, but, like his colleagues of the outer world, resorting also to experimental tests and incomplete induction; frequently finding it necessary, in view of unforeseen disclosures, to abandon one hopeful hypothesis or to transform it by retrenchment or by enlargement:thus, in his own domain, matching, point for point, the processes, methods and experience familiar to the devotee of natural science.