An author has always great difficulty in avoiding unnecessary and tedious detail on the one hand; while, on the other, he must notice such a number of facts as may convince a student, that he is not wandering in a wilderness of crude hypotheses or unsupported assumptions.

And so many think incorrectly that everything was created by the Creator in the beginning as it is seen, that not only the mountains, valleys, and waters, but also various types of minerals occurred together with the rest of the world, and therefore it is said that it is unnecessary to investigate the reasons why they differ in their internal properties and their locations. Such considerations are very dangerous for the growth of all the sciences, and hence for natural knowledge of the Earth, particularly the art of mining, though it is very easy for those clever people to be philosophers, having learnt by heart the three words 'God so created' and to give them in reply in place of all reasons.

Art is usually considered to be not of the highest quality if the desired object is exhibited in the midst of unnecessary lumber.

In Mathematics: Queen and Servant of Sciences (1938), 20. Bell is writing about the postulational method and the art of pruning a set of postulates to bare essentials without internal duplication.

At first sight nothing seems more obvious than that everything has a beginning and an end, and that everything can be subdivided into smaller parts. Nevertheless, for entirely speculative reasons the philosophers of Antiquity, especially the Stoics, concluded this concept to be quite unnecessary. The prodigious development of physics has now reached the same conclusion as those philosophers, Empedocles and Democritus in particular, who lived around 500 B.C. and for whom even ancient man had a lively admiration.

But if capitalism had built up science as a productive force, the very character of the new mode of production was serving to make capitalism itself unnecessary.

By relieving the brain of all unnecessary work, a good notation sets it free to concentrate on more advanced problems, and in effect increases the mental power of the race.

Educators may bring upon themselves unnecessary travail by taking a tactless and unjustifiable position about the relation between scientific and religious narratives.  The point is that profound but contradictory ideas may exist side by side, if they are constructed from different materials and methods and have different purposes. Each tells us something important about where we stand in the universe, and it is foolish to insist that they must despise each other.

Every consideration that did not relate to what is best for the patient was dismissed. This was Sir William [Gull]s professional axiom.  But the carrying of it out not unfrequently involved him in difficulty, and led occasionally to his being misunderstood.  He would frequently refuse to repeat a visit or consultation on the ground that he wished the sufferer to feel that it was unnecessary.

I had begun it, it will now be unnecessary for me to finish it.[At a late age, expressing his enthusiasm for mathematics had gone, as when informed of some other mathematician's current work.]

As quoted by Charles Hutton in A Philosophical and Mathematical Dictionary (1815), Vol. 1, 708. 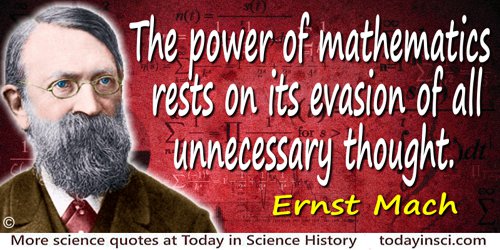 Strange as it may sound, the power of mathematics rests on its evasion of all unnecessary thought and on its wonderful saving of mental operations.

The only object of theoretical physics is to calculate results that can be compared with experiment... it is quite unnecessary that any satisfactory description of the whole course of the phenomena should be given.

The only objections that have occurred to me are, 1st that you have loaded yourself with an unnecessary difficulty in adopting Natura non facit saltum so unreservedly.  And 2nd, it is not clear to me why, if continual physical conditions are of so little moment as you suppose, variation should occur at all. However, I must read the book two or three times more before I presume to begin picking holes.
Comments after reading Darwin's book, Origin of Species.]

The primary aim, object, and purpose of consciousness is control. Consciousness in a mere automaton is a useless and unnecessary epiphenomenon.

Unnecessary noise is the most cruel absence of care which can be inflicted either on sick or well.

When a community or species has no known worth or other economic value to humanity, it is as dishonest and unwise to trump up weak resource values for it as it is unnecessary to abandon the effort to conserve it.

The Arrogance of Humanism

When it was first proposed to establish laboratories at Cambridge, Todhunter, the mathematician, objected that it was unnecessary for students to see experiments performed, since the results could be vouched for by their teachers, all of them of the highest character, and many of them clergymen of the Church of England.

When you wish to instruct, be brief; that men's minds take in quickly what you say, learn its lesson, and retain it faithfully. Every word that is unnecessary only pours over the side of a brimming mind.

[William Gull] endeavoured, above all things, to study the natural history of disease, uncomplicated by the action of unnecessary drugs, and he resented all useless interference with the course of nature. He would say of meddlesome poly-pharmacyFools rush in, where angels fear to tread.