A good theoretical physicist today might find it useful to have a wide range of physical viewpoints and mathematical expressions of the same theory (for example, of quantum electrodynamics) available to him. This may be asking too much of one man. Then new students should as a class have this. If every individual student follows the same current fashion in expressing and thinking about electrodynamics or field theory, then the variety of hypotheses being generated to understand strong interactions, say, is limited. Perhaps rightly so, for possibly the chance is high that the truth lies in the fashionable direction. But, on the off-chance that it is in another directiona direction obvious from an unfashionable view of field theorywho will find it?

EFFECT, n. The second of two phenomena which always occur together in the same order. The first, called a Cause, is said to generate the otherwhich is no more sensible than it would be for one who has never seen a dog except in pursuit of a rabbit to declare the rabbit the cause of the dog.

Euclidean mathematics assumes the completeness and invariability of mathematical forms; these forms it describes with appropriate accuracy and enumerates their inherent and related properties with perfect clearness, order, and completeness, that is, Euclidean mathematics operates on forms after the manner that anatomy operates on the dead body and its members. On the other hand, the mathematics of variable magnitudesfunction theory or analysisconsiders mathematical forms in their genesis. By writing the equation of the parabola, we express its law of generation, the law according to which the variable point moves. The path, produced before the eyes of the student by a point moving in accordance to this law, is the parabola.
If, then, Euclidean mathematics treats space and number forms after the manner in which anatomy treats the dead body, modern mathematics deals, as it were, with the living body, with growing and changing forms, and thus furnishes an insight, not only into nature as she is and appears, but also into nature as she generates and creates,reveals her transition steps and in so doing creates a mind for and understanding of the laws of becoming. Thus modern mathematics bears the same relation to Euclidean mathematics that physiology or biology  bears to anatomy.

Everybody can be great. Because anybody can serve. You dont have to have a college degree to serve  You only need a heart full of grace. A soul generated by love.

From a few basic rules you can generate a cosmos.

It has been said that America is like a gigantic boiler in that once the fire is lighted, there are no limits to the power it can generate. Environmentally, the fire has been lit.

It is one of the laws of life that each acquisition has its cost. No organism can exercise power without yielding up part of its substance. The physiological law of Transfer of Energy is the basis of human success and happiness. There is no action without expenditure of energy and if energy be not expended the power to generate it is lost. This law shows itself in a thousand ways in the life of man. The arm which is not used becomes palsied. The wealth which comes by chance weakens and destroys. The good which is unused turns to evil. The charity which asks no effort cannot relieve the misery she creates.

In The Strength of Being Clean: A Study of the Quest for Unearned Happiness (1900), 6. 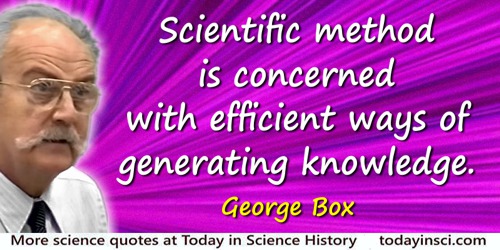 Scientific method is concerned with efficient ways of generating knowledge.

So when light generates itself in one direction drawing matter with it, it produces local motion; and when the light within matter is sent out and what is outside is sent in, it produces qualitative change. From this it is clear that corporeal motion is a multiplicative power of light, and this is a corporeal and natural appetite.

The astronomers said, Give us matter and a little motion and we will construct the universe. It is not enough that we should have matter, we must also have a single impulse, one shove to launch the mass and generate the harmony of the centrifugal and centripetal forces. ... There is no end to the consequences of the act. That famous aboriginal push propagates itself through all the balls of the system, and through every atom of every ball.

The definition of a good mathematical problem is the mathematics it generates rather than the problem itself.

From interview for PBS website on the NOVA program, 'The Proof'.

The overwhelming astonishment, the queerest structure we know about so far in the whole universe, the greatest of all cosmological scientific puzzles, confounding all our efforts to comprehend it, is the earth. We are only now beginning to appreciate how strange and splendid it is, how it catches the breath, the loveliest object afloat around the sun, enclosed in its own blue bubble of atmosphere, manufacturing and breathing its own oxygen, fixing its own nitrogen from the air into its own soil, generating its own weather at the surface of its rain forests, constructing its own carapace from living parts: chalk cliffs, coral reefs, old fossils from earlier forms of life now covered by layers of new life meshed together around the globe, Troy upon Troy.

The mad idea which will lie at the basis of a future fundamental physical theory will come from a realization that physical meaning has some mathematical form not previously associated with reality. From this point of view the problem of the mad idea is the problem of choosing, not of generating, the right idea. One should not understand that too literally. In the 1960s it was said (in a certain connection) that the most important discovery of recent years in physics was the complex numbers. The author [Yuri Manin] has something like that in mind.

Mathematics and Physics (1981), Foreward. Reprinted in Mathematics as Metaphor: Selected Essays of Yuri I. Manin (2007), 90.

[The science of cosmology is] closest to the soul because it has to do with origins, and that somehow generates strong opinions.