After five years' work I allowed myself to speculate on the subject, and drew up some short notes; these I enlarged in 1844 into a sketch of the conclusions, which then seemed to me probable: from that period to the present day I have steadily pursued the same object. I hope that I may be excused for entering on these personal details, as I give them to show that I have not been hasty in coming to a decision.

From On the Origin of Species by Means of Natural Selection; or, The Preservation of Favoured Races in the Struggle for Life (1861), 9.

An inventor is one who can see the applicability of means to supply demand five years before it is obvious to those skilled in the art. 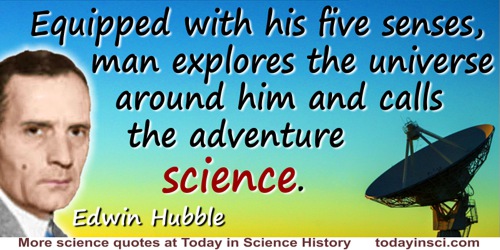 Equipped with his five senses, man explores the universe around him and calls the adventure science.

I think that there is a world market for about five computers.

If basketball was going to enable Bradley to make friends, to prove that a bankers son is as good as the next fellow, to prove that he could do without being the greatest-end-ever at Missouri, to prove that he was not chicken, and to live up to his mothers championship standards, and if he was going to have some moments left over to savor his delight in the game, he obviously needed considerable practice, so he borrowed keys to the gym and set a schedule for himself that he adhereded to for four full yearsin the school year, three and a half hours every day after school, nine to five on Saturday, one-thirty to five on Sunday, and, in the summer, about three hours a day.

If we are still here to witness the destruction of our planet some five billion years or more hence ..., then we will have achieved something so unprecedented in the history of life that we should be willing to sing our swan song with joy.

Imagine life as a game in which you are juggling five balls in the air. You name them - work, family, health, friends, and spirit - and youre keeping all of these in the air. You will soon understand that work is a rubber ball. If you drop it, it will bounce back. But the other four balls - family, health, friends, and spirit are made of glass. If you drop one of these, they will be irrevocably scuffed, marked, nicked, damaged, or even shattered. They will never be the same. You must understand that and strive for balance in your life.

Speaking of libraries: A big open-stack academic or public library is no small pleasure to work in. Youre, say, trying to do a piece on something in Nevada, and you go down to C Floor, deep in the earth, and out to what a miner would call a remote working face. You find 10995.497S just where the card catalog and the online computer thought it would be, but that is only the initial nick. The book you knew about has led you to others you did not know about. To the ceiling the shelves are loaded with books about Nevada. You pull them down, one at a time, and sit on the floor and look them over until you are sitting on a pile five feet high, at which point you are late home for dinner and you get up and walk away. Its an incomparable boon to research, all that; but it is also a reason why there are almost no large open-stack libraries left in the world.

The only census of the senses, so far as I am aware, that ever before made them more than five, was the Irishman's reckoning of seven senses. I presume the Irishman's seventh sense was common sense; and I believe that the possession of that virtue by my countrymenI speak as an Irishman.

In 'The Six Gateways of Knowledge', Presidential Address to the Birmingham and Midland Institute, Birmingham (3 Oct 1883), collected in Popular Lectures and Addresses (1891), Vol. 1, 260. Although biographies are found referring to Kelvin as being a Scottish scientist, because of his lifetime career spent in Glasgow, note that here Kelvin self-identifies as being Irish.

Thus, remarkably, we do not know the true number of species on earth even to the nearest order of magnitude. My own guess, based on the described fauna and flora and many discussions with entomologists and other specialists, is that the absolute number falls somewhere between five and thirty million.

Conservation for the 21st Century