As we conquer peak after peak we see in front of us regions full of interest and beauty, but we do not see our goal, wo do not see the horizon; in the distance tower still higher peaks, which will yield to those who ascend them still wider prospects, and deepen the feeling, the truth of which is emphasised by every advance in science, that Great are the Works of the Lord.

In Presidential Address to the British Association, as quoted in Arthur L. Foley, 'Recent Developments in Physical Science, The Popular Science Monthly (1910), 456.

Before any great scientific principle receives distinct enunciation by individuals, it dwells more or less clearly in the general scientific mind. The intellectual plateau is already high, and our discoverers are those who, like peaks above the plateau, rise a little above the general level of thought at the time.

Glittering white, shining blue, raven black  the land looks like a fairytale. Pinnacle after pinnacle, peak after peakcrevassed, wild as any land on our globe, it lies, unseen and untrodden. It is a wonderful feeling to travel along it.

Have you ever watched an eagle held captive in a zoo, fat and plump and full of food and safe from danger too?
Then have you seen another wheeling high up in the sky, thin and hard and battle-scarred, but free to soar and fly?
Well, which have you pitied the caged one or his brother? Though safe and warm from foe or storm, the captive, not the other!
Theres something of the eagle in climbers, dont you see; a secret thing, perhaps the soul, that clamors to be free.
Its a different sort of freedom from the kind we often mean, not free to work and eat and sleep and live in peace serene.
But freedom like a wild thing to leap and soar and strive, to struggle with the icy blast, to really be alive.
Thats why we climb the mountains peak from which the cloud-veils flow, to stand and watch the eagle fly, and soar, and wheel... below...

In the distance tower still higher peaks which will yield to those who ascend them still wider prospects, and deepen the feeling whose truth is emphasized by every advance in science: that Great are the Works of the Lord.

In the mountains of Parma and Piacenza, multitudes of shells and corals filled with worm-holes may be seen still adhering to the rocks, and when I was making the great horse at Milan a large sack of those which had been found in these parts was brought to my workshop by some peasants... The red stone of the mountains of Verona is found with shells all intermingled, which have become part of this stone... And if you should say that these shells have been and still constantly are being created in such places as these by the nature of the locality or by potency of the heavens in these spots, such an opinion cannot exist in brains possessed of any extensive powers of reasoning because the years of their growth are numbered upon the outer coverings of their shells; and both small and large ones may be seen; and these would not have grown without feeding, or fed without movement, and here [embedded in rock] they would not have been able to move... The peaks of the Apennines once stood up in a sea, in the form of islands surrounded by salt water... and above the plains of Italy where flocks of birds are flying today, fishes were once moving in large shoals.

Standing beside each other, we feasted our eyes. Above us the cerulean sky deepened to an inky black as the remnants of the atmosphere gave way to the depths of space. The mighty Himalaya were now a sparkling relief map spread out before us and garnished with a gleaming lattice work of swirling glaciers. Even Cho Oyu, Lhotse and Makalu, all 8,000-meter giants, were dwarfed. To the east and west, Kanchenjunga and Shishapangma, two more great sentinels of the Himalaya, stood crystal clear over 100 kilometers away. To the north were the burnished plains of Tibet, and to the south the majestic peaks and lush foothills of Nepal. We stood on the crown jewel of the earth, the curved horizon spinning endlessly around us.

The evening was calm, the calmest we had known above the North Col. The smooth, outward dipping slabs glowed in the fast setting sun and, at an immense distance beneath, clouds concealed the valleys and lesser peaks. There was nothing to obstruct the tremendous prospect. Seen from Everest, great peaks that dominate the climber as he toils along the East Rongbuk Glacier, and up the slopes of the North Col, show like insignificant ripples at the base of a great ocean roller. Even the North Peak was but a stepping-stone to quick-footed vision.

The human brain is a machine which alone accounts for all our actions, our most private thoughts, our beliefs. ... To choose a spouse, a job, a religious creedor even choose to rob a bankis the peak of a causal chain that runs back to the origin of life and down to the nature of atoms and molecules. 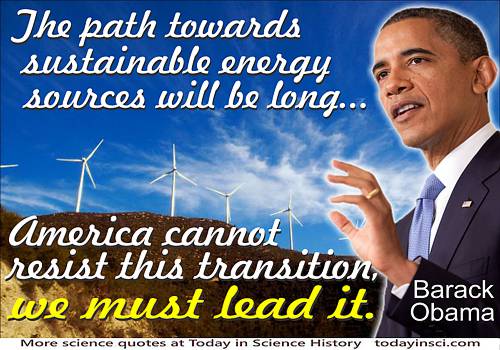 The path towards sustainable energy sources will be long and sometimes difficult. But America cannot resist this transition, we must lead it. We cannot cede to other nations the technology that will power new jobs and new industries, we must claim its promise. Thats how we will maintain our economic vitality and our national treasureour forests and waterways, our crop lands and snow-capped peaks. That is how we will preserve our planet, commanded to our care by God. Thats what will lend meaning to the creed our fathers once declared.

Theorists tend to peak at an early age; the creative juices tend to gush very early and start drying up past the age of fifteenor so it seems. They need to know just enough; when theyre young they havent accumulated the intellectual baggage.

In Leon Lederman and Dick Teresi, The God Particle: If the Universe is the Answer, What is the Question (1993), 16.

We are in a position similar to that of a mountaineer who is wandering over uncharted spaces, and never knows whether behind the peak which he sees in front of him and which he tries to scale there may not be another peak still beyond and higher up.

We talk about our high standard of living in this country. What we have is a high standard of work. Usually the peaks of civilization have been periods when a large proportion of the population had time to live. I dont think were doing this today. I think the people who could live are still spending their time and supplementary resources on making a living.

We think of Euclid as of fine ice; we admire Newton as we admire the peak of Teneriffe. Even the intensest labors, the most remote triumphs of the abstract intellect, seem to carry us into a region different from our ownto be in a terra incognita of pure reasoning, to cast a chill on human glory.