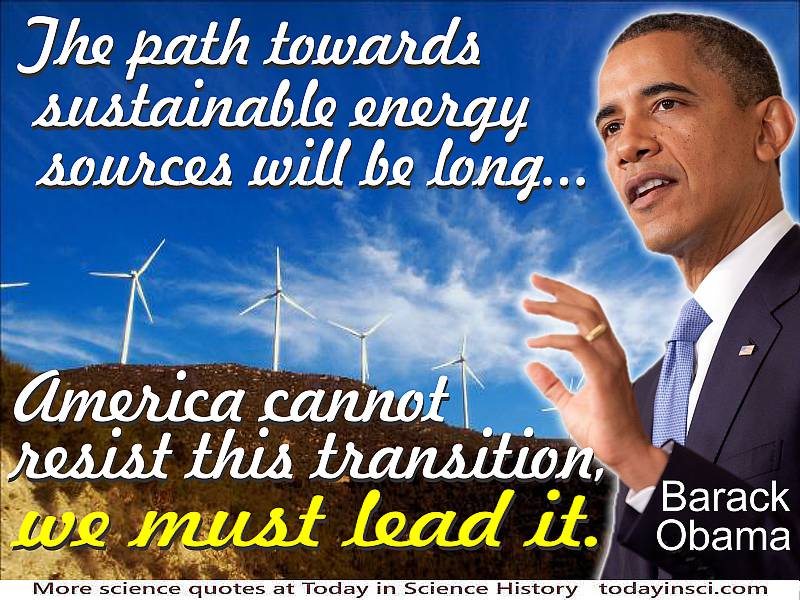 “The path towards sustainable energy sources will be long and sometimes difficult. But America cannot resist this transition, we must lead it.”
— Barack Obama
Second Inaugural Address (21 Jan 2013)

On 21 Jan 2013, President Barack Obama gave his second Inaugural Address at the United States Capitol. The topics in the speech were wide-ranging, including the usual references to the Constitution, what makes America exceptional and patriotism. He then talked about the nation's challenges, including wars, education, work skills, income inequality, health care and more.

About half-way through his address, after speaking on the issue of climate change, the President moved to the importance of developing renewable energy sources:

“The path towards sustainable energy sources will be long and sometimes difficult. But America cannot resist this transition, we must lead it. We cannot cede to other nations the technology that will power new jobs and new industries, we must claim its promise. That’s how we will maintain our economic vitality and our national treasure—our forests and waterways, our crop lands and snow-capped peaks. That is how we will preserve our planet, commanded to our care by God. That’s what will lend meaning to the creed our fathers once declared.”

Before reaching his conclusion, the President also spoke about various other subjects, such as forging worldwide alliances for peace, the right to vote, and retaining a well-educated workforce. There was applause for the statement, “Progress does not compel us to settle centuries-long debates about the role of government for all time, but it does require us to act in our time.” He ended with the customary “Bless these United States of America.”