“Deny The Overwhelming Judgement of Science” 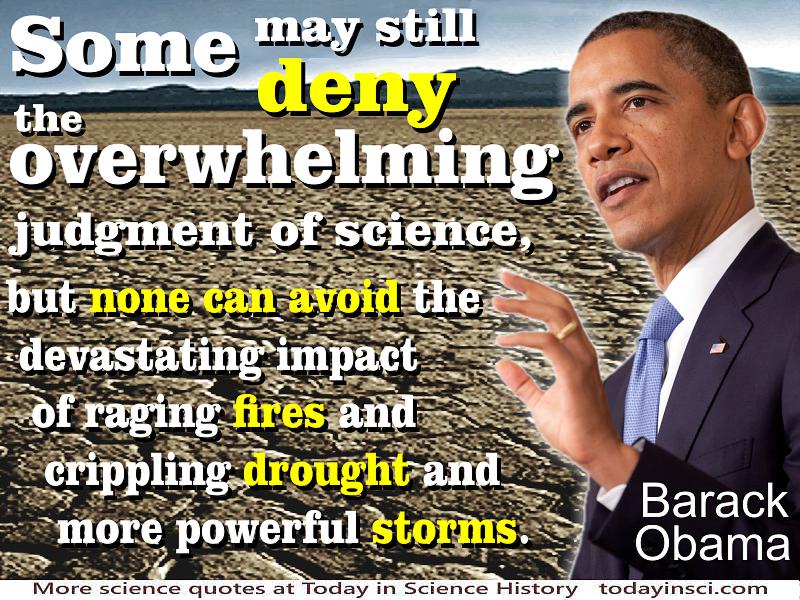 “Some may still deny the overwhelming judgment of science, but none can avoid the devastating impact of raging fires and crippling drought and more powerful storms.”
— Barack Obama
Second Inaugural Address (21 Jan 2013)

On 21 Jan 2013, President Barack Obama gave his second Inaugural Address at the United States Capitol. The topics in the speech were wide-ranging, including the customary references to the Constitution, what makes America exceptional and patriotism. He then talked about the nation's challenges, including wars, education, wars, poverty, health care and more.

About half-way through his address, the President spoke on the issue of climate change:

“We, the people, still believe that our obligations as Americans are not just to ourselves, but to all posterity. We will respond to the threat of climate change, knowing that the failure to do so would betray our children and future generations. Some may still deny the overwhelming judgment of science, but none can avoid the devastating impact of raging fires and crippling drought and more powerful storms.”

He received applause at his reference to the obligation to future generations. His next topic was the need to develop renewable energy sources. Before reaching his conclusion, the President also spoke about various other subjects, such as forging worldwide alliances for peace, the right to vote, retaining a well-educated workforce. He ended with the customary “Bless these United States of America.”