August 29, 1662. The council and fellows of the Royal Society went in a body to Whitehall to acknowledge his Majestys royal grace to granting our charter and vouchsafing to be himself our founder; then the president gave an eloquent speech, to which his Majesty gave a gracious reply and we all kissed his hand. Next day, we went in like manner with our address to my Lord Chancellor, who had much prompted our patent.

Economists use the expression opportunity costs for losses incurred through certain choices made over others, including ignorance and inaction. For systematics, or more precisely the neglect of systematics and the biological research dependent upon it, the costs are very high.

Every hour a scientist spends trying to raise funds is an hour lost from important thought and research.

Epigraph in Isaac Asimovs Book of Science and Nature Quotations (1988), 287.

Governments are trying to achieve unanimity by stifling any scientist who disagrees. Einstein could not have got funding under the present system.

I think its time we recognized the Dark Ages are over. Galileo and Copernicus have been proven right. The world is in fact round; the Earth does revolve around the sun. I believe God gave us intellect to differentiate between imprisoning dogma and sound ethical science, which is what we must do here today.
Debating federal funding for stem cell research as Republican Representative (CT).

If the NSF had never existed, if the government had never funded American mathematics, we would have half as many mathematicians as we now have, and I don't see anything wrong with that.

It always seems to be easier to obtain financial support for science when there is some connection with defence. Oceanography is no exception to this.

Its hard to explain to people what the significance of an invention is, so its hard to get funding. The first thing they say is that it cant be done. Then they say, You didn't do it right. Then, when youve done it, they finally say, Well, it was obvious anyway. 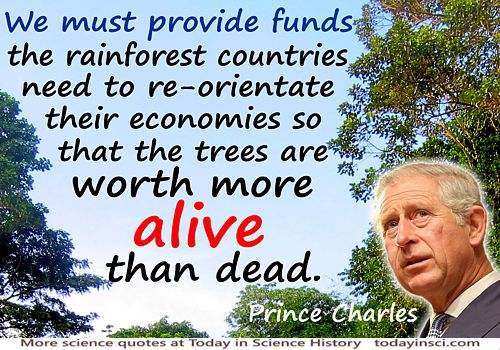 My Rainforests Project  has three main elements. Firstly, to determine how much funding the rainforest countries need to re-orientate their economies so that the trees are worth more alive than dead.

The rigid career path of a professor at a modern university is that One Must Build the Big Research Group, recruit doctoral students more vigorously than the head football coach, bombard the federal agencies with grant applications more numerous than the pollen falling from the heavens in spring, and leave the paper writing and the research to the postdocs, research associates, and students who do all the bench work and all the computer programming. A professor is chained to his previous topics by his Big Group, his network of contacts built up laboriously over decades, and the impossibility of large funding except in areas where the grantee has grown the group from a corner of the building to an entire floor. The senior tenure-track faculty at a research universitythe silverbacks in anthropological jargonare bound by invisible chains stronger than the strongest steel to a narrow range of what the Prevailing Consensus agrees are Very Important Problems. The aspiring scientist is confronted with the reality that his mentors are all business managers.

In his Foreword to Cornelius Lanczos, Discourse on Fourier Series, ix-x.

This study was supported by NSF MBS75-14268 and inspired by paying 95 cents for a rotten avocado.

In 'Why Fruits Rot, Seeds Mold, and Meat Spoils', The American Naturalist (Jul-Aug 1977), 111, No. 980, 707. The author suggests that food spoilage is the result of microbes competing to keep the resource to themselves by engendering the rotting process to repel larger animals from consuming the food item.

Two years ago 1 tried to appeal to Rockefellers conscience about the absurd method of allocating grants, unfortunately without success. Bohr has now gone to see him, in an attempt to persuade him to take some action on behalf of the exiled German scientists.

We have vastly increased the amount of funding that is available for conservation partnerships.

You must never believe all these things which the scientists say because they always want more than they can get—they are never satisfied.
[Responding to a complaint of inadequate support for research.]