From the original French in TraitĂ© Ă©lĂ©mentaire de chimie (1789, 1793), discours prĂ©liminaire, ix; and from edition translated into English by Robert Kerr, as Elements of Chemistry (1790), Preface, xvii. 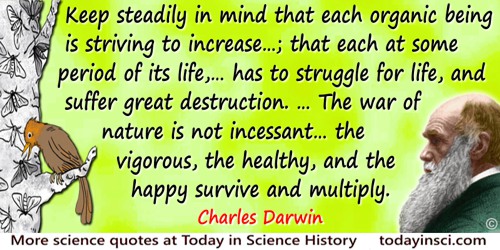 All that we can do, is to keep steadily in mind that each organic being is striving to increase at a geometrical ratio; that each at some period of its life, during some season of the year, during each generation or at intervals, has to struggle for life, and to suffer great destruction. When we reflect on this struggle, we may console ourselves with the full belief, that the war of nature is not incessant, that no fear is felt, that death is generally prompt, and that the vigorous, the healthy, and the happy survive and multiply.

From On the Origin of Species by Means of Natural Selection; or, The Preservation of Favoured Races in the Struggle for Life (1861), 76.

August 29, 1662. The council and fellows of the Royal Society went in a body to Whitehall to acknowledge his Majestyâ€™s royal grace to granting our charter and vouchsafing to be himself our founder; then the president gave an eloquent speech, to which his Majesty gave a gracious reply and we all kissed his hand. Next day, we went in like manner with our address to my Lord Chancellor, who had much prompted our patent.

I first met J. Robert Oppenheimer on October 8, 1942, at Berkeley, Calif. There we discussed the theoretical research studies he was engaged in with respect to the physics of the bomb. Our discussions confirmed my previous belief that we should bring all of the widely scattered theoretical work together. â€¦ He expressed complete agreement, and it was then that the idea of the prompt establishment of a Los Alamos was conceived.â€ť

I have always liked horticulturists, people who make their living from orchards and gardens, whose hands are familiar with the feel of the bark, whose eyes are trained to distinguish the different varieties, who have a form memory. Their brains are not forever dealing with vague abstractions; they are satisfied with the romance which the seasons bring with them, and have the patience and fortitude to gamble their lives and fortunes in an industry which requires infinite patience, which raise hopes each spring and too often dashes them to pieces in fall. They are always conscious of sun and wind and rain; must always be alert lest they lose the chance of ploughing at the right moment, pruning at the right time, circumventing the attacks of insects and fungus diseases by quick decision and prompt action. They are manufacturers of a high order, whose business requires not only intelligence of a practical character, but necessitates an instinct for industry which is different from that required by the city dweller always within sight of other people and the sound of their voices. The successful horticulturist spends much time alone among his trees, away from the constant chatter of human beings.

I have reviewed this work elsewhere under the title 'Natural Products Chemistry 1950 to 1980-A Personal View.' It is with some relish that I recall the flood of reprint requests prompted by the following footnote on the title page: 'Selected personal statements by the author were removed by the editor without Professor Djerassi's consent. An uncensored version of this paper can be obtained by writing to Professor C. Djerassi'.

In 1684 Dr Halley came to visit him at Cambridge, after they had been some time together, the Dr asked him what he thought the Curve would be that would be described by the Planets supposing the force of attraction towards the Sun to be reciprocal to the square of their distance from it. Sr Isaac replied immediately that it would be an Ellipsis, the Doctor struck with joy & amazement asked him how he knew it, why saith he I have calculated it, whereupon Dr Halley asked him for his calculation without any farther delay. Sr Isaac looked among his papers but could not find it, but he promised him to renew it, & then to send it him.
[Recollecting Newton's account of the meeting after which Halley prompted Newton to write The Principia. When asking Newton this question, Halley was aware, without revealing it to Newton that Robert Hooke had made this hypothesis of plantary motion a decade earlier.]

In recent weeks we learned that scientists have created human embryos in test tubes solely to experiment on them. This is deeply troubling, and a warning sign that should prompt all of us to think through these issues very carefully.

Our first endeavors are purely instinctive prompting of an imagination vivid and undisciplined. As we grow older reason asserts itself and we become more and more systematic and designing. But those early impulses, though not immediately productive, are of the greatest moment and may shape our very destinies. Indeed, I feel now that had I understood and cultivated instead of suppressing them, I would have added substantial value to my bequest to the world. But not until I had attained manhood did I realize that I was an inventor.

In 'My Early Life', My Inventions: And Other Writings (2016), 1. Originally published in serial form in Part 1, 'My Inventions', Electrical Experimenter magazine (1919).

Scholars should always receive with thanks new suppositions about things, provided they possess some tincture of sense; another head may often make an important discovery prompted by nothing more than such a stimulus: the generally accepted way of explaining a thing no longer had any effect on his brain and could communicate to it no new notion.

The desire for guidance, love, and support prompts men to form the social or moral conception of God. This is the God of Providence, who protects, disposes, rewards, and punishes; the God who, according to the limits of the believerâ€™s outlook, loves and cherishes the life of the tribe or of the human race, or even or life itself; the comforter in sorrow and unsatisfied longing; he who preserves the souls of the dead. This is the social or moral conception of God.

When Cayley had reached his most advanced generalizations he proceeded to establish them directly by some method or other, though he seldom gave the clue by which they had first been obtained: a proceeding which does not tend to make his papers easy reading. â€¦
His literary style is direct, simple and clear. His legal training had an influence, not merely upon his mode of arrangement but also upon his expression; the result is that his papers are severe and present a curious contrast to the luxuriant enthusiasm which pervades so many of Sylvesterâ€™s papers. He used to prepare his work for publication as soon as he carried his investigations in any subject far enough for his immediate purpose. â€¦ A paper once written out was promptly sent for publication; this practice he maintained throughout life. â€¦ The consequence is that he has left few arrears of unfinished or unpublished papers; his work has been given by himself to the world.

Wonder â€¦ and not any expectation of advantage from its discoveries, is the first principle which prompts mankind to the study of Philosophy, of that science which pretends to lay open the concealed connections that unite the various appearances of nature.

In 'The History of Astronomy,' Essays on Philosophical Subjects (1795).