From the original French in TraitĂ© Ă©lĂ©mentaire de chimie (1789, 1793), discours prĂ©liminaire, ix; and from edition translated into English by Robert Kerr, as Elements of Chemistry (1790), Preface, xvii.

In mathematics, â€¦ and in natural philosophy since mathematics was applied to it, we see the noblest instance of the force of the human mind, and of the sublime heights to which it may rise by cultivation. An acquaintance with such sciences naturally leads us to think well of our faculties, and to indulge sanguine expectations concerning the improvement of other parts of knowledge. To this I may add, that, as mathematical and physical truths are perfectly uninteresting in their consequences, the understanding readily yields its assent to the evidence which is presented to it; and in this way may be expected to acquire the habit of trusting to its own conclusions, which will contribute to fortify it against the weaknesses of scepticism, in the more interesting inquiries after moral truth in which it may afterwards engage.

In order to drive the individuals towards reproduction, sexuality had therefore to be associated with some other devices. Among these was pleasure. â€¦ Thus pleasure appears as a mere expedient to push individuals to indulge in sex and therefore to reproduce. A rather successful expedient indeed as judged by the state of the world population.

Little could Plato have imagined, when, indulging his instinctive love of the true and beautiful for their own sakes, he entered upon these refined speculations and revelled in a world of his own creation, that he was writing the grammar of the language in which it would be demonstrated in after ages that the pages of the universe are written.

From Lecture (4 Dec 1854) delivered to the Gresham Committee and the members of the Common Council of the City of London, 'A Probationary Lecture on Geometry', collected in Collected Mathematical Papers of James Joseph Sylvester (1908), Vol. 2, 7.

My fatherâ€™s collection of fossils was practically unnamed, but the appearance of Phillipsâ€™ book [Geology of the Yorkshire Coast], in which most of our specimens were figured, enabled us to remedy this defect. Every evening was devoted by us to accomplishing the work. This was my first introduction to true scientific study. â€¦ Phillipsâ€™ accurate volume initiated an entirely new order of things. Many a time did I mourn over the publication of this book, and the consequences immediately resulting from it. Instead of indulging in the games and idleness to which most lads are prone, my evenings throughout a long winter were devoted to the detested labour of naming these miserable stones. Such is the short-sightedness of boyhood. Pursuing this uncongenial work gave me in my thirteenth year a thorough practical familiarity with the palaeontological treasures of Eastern Yorkshire. This early acquisition happily moulded the entire course of my future life.

Newton took no exercise, indulged in no amusements, and worked incessantly, often spending eighteen or nineteen hours out of the twenty-four in writing.

Nothing holds me ... I will indulge in my sacred fury; I will triumph over mankind by the honest confession that I have stolen the golden vases of the Egyptians to build up a tabernacle for my God, far away from the confines of Egypt. If you forgive me, I rejoice ; if you are angry, I can bear it. The die is cast; the book is written, to be read either now or by posterity, I care not which. It may well wait a century for a reader, as God has waited six thousand years for an observer.

Science and art are only too often a superior kind of dope, possessing this advantage over booze and morphia: that they can be indulged in with a good conscience and with the conviction that, in the process of indulging, one is leading the â€śhigher life.â€ť

The science of calculation â€¦ is indispensable as far as the extraction of the square and cube roots: Algebra as far as the quadratic equation and the use of logarithms are often of value in ordinary cases: but all beyond these is but a luxury; a delicious luxury indeed; but not to be indulged in by one who is to have a profession to follow for his subsistence.

In Letter (18 Jun 1799) to William G. Munford. On founders.archives.gov website.

To be at once a Scholar and a Wanderer is to indulge the least congruous desires, in the same hour to gratify the last refinement of intellectual curiosity and to obey a call from the first rude state of nature. For the â€śwandering feverâ€ť is in a sense a temptation of original sin, still heard across the ages, and the scholar finds a subtle joy in returning to the wilderness rather in spite than because of being a scholar.

What [man landing on the moon] is doing up there is indulging his obsession with the impossible. The impossible infuriates and tantalizes him. Show him an impossible job and he will reduce it to a possibility so trite that eventually it bores him. 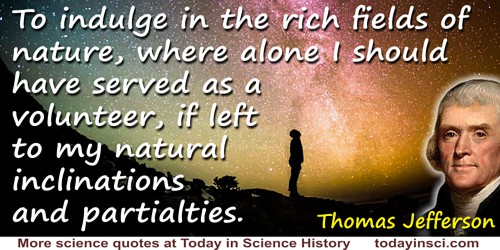 [Writing this letter] has permitted me, for a moment, to abstract myself from the dry and dreary waste of politics, into which I have been impressed by the times on which I happened, and to indulge in the rich fields of nature, where alone I should have served as a volunteer, if left to my natural inclinations and partialties.

â€śFacts speak for themselves.â€ť Illusion! Facts are ventriloquistsâ€™ dummies. Sitting on a wise manâ€™s knee they may be made to utter words of wisdom; elsewhere, they say nothing, or talk nonsense, or indulge in sheer diabolism.