...the scientific cast of mind examines the world critically, as if many alternative worlds might exist, as if other things might be here which are not. Then we are forced to ask why what we see is present and not something else. Why are the Sun and moon and the planets spheres? Why not pyramids, or cubes, or dodecahedra? Why not irregular, jumbly shapes? Why so symmetrical, worlds? If you spend any time spinning hypotheses, checking to see whether they make sense, whether they conform to what else we know. Thinking of tests you can pose to substantiate or deflate hypotheses, you will find yourself doing science. 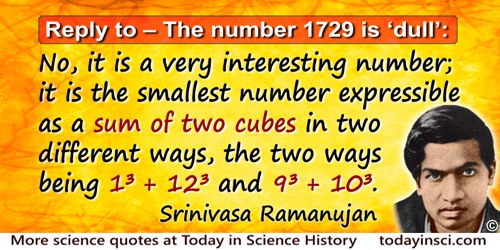 Replying to G. H. Hardyâ€™s suggestion that the number of a taxi (1729) was â€śdullâ€ť: No, it is a very interesting number; it is the smallest number expressible as a sum of two cubes in two different ways, the two ways being 1Âł + 12Âł and 9Âł + 10Âł.

Proceedings of the London Mathematical Society (26 May 1921).

Circles to square and cubes to double
Would give a man excessive trouble.
The longitude uncertain roams,
In spite of Whiston and his bombs.

In 'Alma', Canto III, in Samuel Johnson, The Works of the English Poets, from Chaucer to Cowper (1810), 203. The reference to longitude reflects the difficulty of its determination at sea, and the public interest in the attempts to win the prize instituted by the British government in 1714 for a successful way to find longitude at sea (eventually won by John Harrison's chronometer). In this poem, William Whiston (who succeeded Isaac Newton as Lucasian Professor at Cambridge) is being satirized for what many thought was a crack-brained scheme to find the longitude. This proposed, with Humphrey Ditton, the use of widely separated ships firing off shells programmed to explode at a set time, and calculation of distance between them made from the time-lag between the observed sounds of the explosions using the known speed of sound.

I remember once going to see him when he was lying ill at Putney. I had ridden in taxi cab number 1729 and remarked that the number seemed to me rather a dull one, and that I hoped it was not an unfavorable omen. â€śNo,â€ť he replied, â€śit is a very interesting number; it is the smallest number expressible as the sum of two cubes in two different ways.â€ť

If the atoms in [a] decimetre cube of lead were all put into a chain side by side the same distance apart as they are in the normal lead, the strings of atoms so formed would reach over six million million miles.

Seeing there is nothing that is so troublesome to mathematical practice â€¦ than the multiplications, divisions, square and cubical extractions of great numbers, which besides the tedious expense of time are â€¦ subject to many slippery errors, I began therefore to consider [how] I might remove those hindrances.

From Mirifici Logarithmorum Canonis Descriptio (1614), as translated by William Rae Macdonald in A Description of the Wonderful Canon of Logarithms (1889),

The chemist in America has in general been content with what I have called a loafer electron theory. He has imagined the electrons sitting around on dry goods boxes at every corner [viz. the cubic atom], ready to shake hands with, or hold on to similar loafer electrons in other atoms.

The mathematician of to-day admits that he can neither square the circle, duplicate the cube or trisect the angle. May not our mechanicians, in like manner, be ultimately forced to admit that aerial flight is one of that great class of problems with which men can never copeâ€¦ I do not claim that this is a necessary conclusion from any past experience. But I do think that success must await progress of a different kind from that of invention.
[Written following Samuel Pierpoint Langley's failed attempt to launch his flying machine from a catapult device mounted on a barge in Oct 1903. The Wright Brother's success came on 17 Dec 1903.]

The mathematics of cooperation of men and tools is interesting. Separated men trying their individual experiments contribute in proportion to their numbers and their work may be called mathematically additive. The effect of a single piece of apparatus given to one man is also additive only, but when a group of men are cooperating, as distinct from merely operating, their work raises with some higher power of the number than the first power. It approaches the square for two men and the cube for three. Two men cooperating with two different pieces of apparatus, say a special furnace and a pyrometer or a hydraulic press and new chemical substances, are more powerful than their arithmetical sum. These facts doubtless assist as assets of a research laboratory.

Quoted from a speech delivered at the fiftieth anniversary of granting of M.I.T's charter, in Guy Suits, 'Willis Rodney Whitney', National Academy of Sciences, Biographical Memoirs (1960), 352.

The science of calculation â€¦ is indispensable as far as the extraction of the square and cube roots: Algebra as far as the quadratic equation and the use of logarithms are often of value in ordinary cases: but all beyond these is but a luxury; a delicious luxury indeed; but not to be indulged in by one who is to have a profession to follow for his subsistence.

In Letter (18 Jun 1799) to William G. Munford. On founders.archives.gov website.

The smallest particles of matter were said [by Plato] to be right-angled triangles which, after combining in pairs, ... joined together into the regular bodies of solid geometry; cubes, tetrahedrons, octahedrons and icosahedrons. These four bodies were said to be the building blocks of the four elements, earth, fire, air and water ... [The] whole thing seemed to be wild speculation. ... Even so, I was enthralled by the idea that the smallest particles of matter must reduce to some mathematical form ... The most important result of it all, perhaps, was the conviction that, in order to interpret the material world we need to know something about its smallest parts.
[Recalling how as a teenager at school, he found Plato's Timaeus to be a memorable poetic and beautiful view of atoms.]

To divide a cube into two other cubes, a fourth power, or in general any power whatever into two powers of the same denomination above the second is impossible, and I have assuredly found an admirable proof of this, but the margin is too narrow to contain it.

His handwritten note in the margin, beside the eighth proposition, in his copy of Diophantus' Arithmetica, Book 2. It is known as Fermatâ€™s Last Theorem. (A proof remained elusive until 1994.) In PrĂ©cis des Oeuvres MathĂ©matiques de P. Fermat et de l'Arithmetique de Diophante (1853), 53-54. As translated by Vera Sandford in David Eugene Smith, A Source Book in Mathematics (1929), 212.

You propound a complicated arithmetical problem: say cubing a number containing four digits. Give me a slate and half an hourâ€™s time, and I can produce a wrong answer.

â€śYes,â€ť he said. â€śBut these things (the solutions to problems in solid geometry such as the duplication of the cube) do not seem to have been discovered yet.â€ť â€śThere are two reasons for this,â€ť I said. â€śBecause no city holds these things in honour, they are investigated in a feeble way, since they are difficult; and the investigators need an overseer, since they will not find the solutions without one. First, it is hard to get such an overseer, and second, even if one did, as things are now those who investigate these things would not obey him, because of their arrogance. If however a whole city, which did hold these things in honour, were to oversee them communally, the investigators would be obedient, and when these problems were investigated continually and with eagerness, their solutions would become apparent.â€ť