Question: What is the reason that the hammers which strike the strings of a pianoforte are made not to strike the middle of the strings? Why are the bass strings loaded with coils of wire?
Answer: Because the tint of the clang would be bad. Because to jockey them heavily.

Genuine student answer* to an Acoustics, Light and Heat paper (1880), Science and Art Department, South Kensington, London, collected by Prof. Oliver Lodge. Quoted in Henry B. Wheatley, Literary Blunders (1893), 176, Question 3. (*From a collection in which Answers are not given verbatim et literatim, and some instances may combine several students' blunders.) 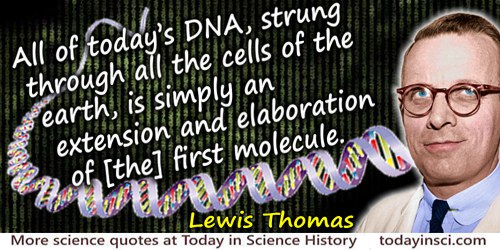 All of todays DNA, strung through all the cells of the earth, is simply an extension and elaboration of [the] first molecule.

As every circumstance relating to so capital a discovery as this (the greatest, perhaps, that has been made in the whole compass of philosophy, since the time of Sir Isaac Newton) cannot but give pleasure to all my readers, I shall endeavour to gratify them with the communication of a few particulars which I have from the best authority. The Doctor [Benjamin Franklin], after having published his method of verifying his hypothesis concerning the sameness of electricity with the matter lightning, was waiting for the erection of a spire in Philadelphia to carry his views into execution; not imagining that a pointed rod, of a moderate height, could answer the purpose; when it occurred to him, that, by means of a common kite, he could have a readier and better access to the regions of thunder than by any spire whatever. Preparing, therefore, a large silk handkerchief, and two cross sticks, of a proper length, on which to extend it, he took the opportunity of the first approaching thunder storm to take a walk into a field, in which there was a shed convenient for his purpose. But dreading the ridicule which too commonly attends unsuccessful attempts in science, he communicated his intended experiment to no body but his son, who assisted him in raising the kite.
The kite being raised, a considerable time elapsed before there was any appearance of its being electrified. One very promising cloud passed over it without any effect; when, at length, just as he was beginning to despair of his contrivance, he observed some loose threads of the hempen string to stand erect, and to avoid one another, just as if they had been suspended on a common conductor. Struck with this promising appearance, he inmmediately presented his knuckle to the key, and (let the reader judge of the exquisite pleasure he must have felt at that moment) the discovery was complete. He perceived a very evident electric spark. Others succeeded, even before the string was wet, so as to put the matter past all dispute, and when the rain had wetted the string, he collected electric fire very copiously. This happened in June 1752, a month after the electricians in France had verified the same theory, but before he had heard of any thing that they had done.

As experimentalists, we always can find something to do, even if we have to work with string and sealing wax.

For just as musical instruments are brought to perfection of clearness in the sound of their strings by means of bronze plates or horn sounding boards, so the ancients devised methods of increasing the power of the voice in theaters through the application of the science of harmony.

If the atoms in [a] decimetre cube of lead were all put into a chain side by side the same distance apart as they are in the normal lead, the strings of atoms so formed would reach over six million million miles.

In this communication I wish first to show in the simplest case of the hydrogen atom (nonrelativistic and undistorted) that the usual rates for quantization can be replaced by another requirement, in which mention of whole numbers no longer occurs. Instead the integers occur in the same natural way as the integers specifying the number of nodes in a vibrating string. The new conception can be generalized, and I believe it touches the deepest meaning of the quantum rules.

It is impossible not to feel stirred at the thought of the emotions of man at certain historic moments of adventure and discoveryColumbus when he first saw the Western shore, Pizarro when he stared at the Pacific Ocean, Franklin when the electric spark came from the string of his kite, Galileo when he first turned his telescope to the heavens. Such moments are also granted to students in the abstract regions of thought, and high among them must be placed the morning when Descartes lay in bed and invented the method of co-ordinate geometry.

Saturated with that speculative spirit then pervading the Greek mind, he [Pythagoras] endeavoured to discover some principle of homogeneity in the universe. Before him, the philosophers of the Ionic school had sought it in the matter of things; Pythagoras looked for it in the structure of things. He observed the various numerical relations or analogies between numbers and the phenomena of the universe. Being convinced that it was in numbers and their relations that he was to find the foundation to true philosophy, he proceeded to trace the origin of all things to numbers. Thus he observed that musical strings of equal lengths stretched by weights having the proportion of 1/2, 2/3, 3/4, produced intervals which were an octave, a fifth and a fourth. Harmony, therefore, depends on musical proportion; it is nothing but a mysterious numerical relation. Where harmony is, there are numbers. Hence the order and beauty of the universe have their origin in numbers. There are seven intervals in the musical scale, and also seven planets crossing the heavens. The same numerical relations which underlie the former must underlie the latter. But where number is, there is harmony. Hence his spiritual ear discerned in the planetary motions a wonderful Harmony of spheres.

Suppose you were given a watch, a tube to sight with and a string, and then asked to determine the distance to the nearest star. Or you were asked the chemical composition, pressure or temperature of the Sun. A hundred or more years ago, these questions seemed impossible. Now astronomers are answering them all the time, and they believe their answers. Why? Because there are many parallel ways and tests, and they all give the same answers.

The body of science is not, as it is sometimes thought, a huge coherent mass of facts, neatly arranged in sequence, each one attached to the next by a logical string. In truth, whenever we discover a new fact it involves the elimination of old ones. We are always, as it turns out, fundamentally in error.

In 'On Science and Certainty', Discover Magazine (Oct 1980)

The mind of God we believe is cosmic music, the music of strings resonating through 11 dimensional hyperspace. That is the mind of God.

The words are strung together, with their own special grammarthe laws of quantum theoryto form sentences, which are molecules. Soon we have books, entire libraries, made out of molecular sentences. The universe is like a library in which the words are atoms. Just look at what has been written with these hundred words! Our own bodies are books in that library, specified by the organization of molecules—but the universe and literature are organizations of identical, interchangeable objects; they are information systems.

There is geometry in the humming of the strings. There is music in the spacing of the spheres.

Quoted by Aristotle in Metaphysics. In The Houghton Mifflin Dictionary of Biography (2003), 1250.

We are a bit of stellar matter gone wrong. We are physical machinerypuppets that strut and talk and laugh and die as the hand of time pulls the strings beneath. But there is one elementary inescapable answer. We are that which asks the question.

We are many small puppets moved by fate and fortune through strings unseen by us; therefore, if it is so as I think, one has to prepare oneself with a good heart and indifference to accept things coming towards us, because they cannot be avoided, and to oppose them requires a violence that tears our souls too deeply, and it seems that both fortune and men are always busy in affairs for our dislike because the former is blind and the latter only think of their interest.

We make a lot of mistakes in the environmental space.  We dont do a good-enough job of asking, What are the fundamentals of telling a good story? And that is not statistics, its usually not science, or at least complex science. Its people stories.  Its got to have adventure, its got to be funny, its got to pull my heart strings, its got to have conflict, setting, character. Its a story. And if it doesnt have those things, it can be the best-meaning story in the world, and nobodys going to buy it.

Why should an hypothesis, suggested by a scientist, be accepted as true until its truth is established? Science should be the last to make such a demand because science to be truly science is classified knowledge; it is the explanation of facts. Tested by this definition, Darwinism is not science at all; it is guesses strung together.