Each and every loss becomes an instance of ultimate tragedysomething that once was, but shall never be known to us. The hump of the giant deeras a nonfossilizable item of soft anatomyshould have fallen into the maw of erased history. But our ancestors provided a wondrous rescue, and we should rejoice mightily. Every new item can instruct us; every unexpected object possesses beauty for its own sake; every rescue from historys great shredding machine isand I dont know how else to say thisa holy act of salvation for a bit of totality.

Good scholars struggle to understand the world in an integral way (pedants bite off tiny bits and worry them to death). These visions of reality ... demand our respect, for they are an intellectuals only birthright. They are often entirely wrong and always flawed in serious ways, but they must be understood honorably and not subjected to mayhem by the excision of patches.

How was your flight? Well, aeronautically it was a great success. Socially, it left quite a bit to be desired.

It is easy to overlook this thought that life just is. As humans we are inclined to feel that life must have a point. We have plans and aspirations and desires. We want to take constant advantage of the intoxicating existence weve been endowed with. But whats life to a lichen? Yet its impulse to exist, to be, is every bit as strong as ours-arguably even stronger. If I were told that I had to spend decades being a furry growth on a rock in the woods, I believe I would lose the will to go on. Lichens dont. Like virtually all living things, they will suffer any hardship; endure any insult, for a moments additions existence. Life, in short just wants to be.

Its impossible to move, to live, to operate at any level without leaving traces, bits, seemingly meaningless fragments of personal information. 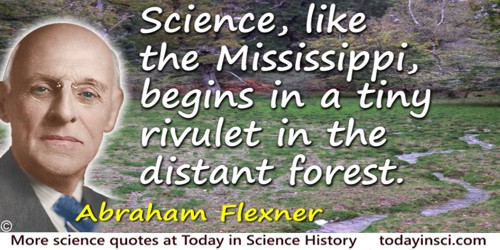 One must be wary in attributing scientific discovery wholly to any one person. Almost every discovery has a long and precarious history. Someone finds a bit here, another a bit there. A third step succeeds later and thus onward till a genius pieces the bits together and makes the decisive contribution. Science, like the Mississippi, begins in a tiny rivulet in the distant forest. Gradually other streams swell its volume. And the roaring river that bursts the dikes is formed from countless sources.

People will work every bit as hard to fool themselves as they will to fool otherswhich makes it very difficult to tell just where the line between foolishness and fraud is located.

The first question which you will ask and which I must try to answer is this, What is the use of climbing Mount Everest ? and my answer must at once be, It is no use. There is not the slightest prospect of any gain whatsoever. Oh, we may learn a little about the behavior of the human body at high altitudes, and possibly medical men may turn our observation to some account for the purposes of aviation. But otherwise nothing will come of it. We shall not bring back a single bit of gold or silver, not a gem, nor any coal or iron. We shall not find a single foot of earth that can be planted with crops to raise food. Its no use. So, if you cannot understand that there is something in man which responds to the challenge of this mountain and goes out to meet it, that the struggle is the struggle of life itself upward and forever upward, then you wont see why we go. What we get from this adventure is just sheer joy. And joy is, after all, the end of life. We do not live to eat and make money. We eat and make money to be able to enjoy life. That is what life means and what life is for.

The great thing about being an astronaut is you kind of get to do a little bit of everything. I mean, were going to ride a rocket uphill.

The vehicle explodes, literally explodes, off the pad. The simulator shakes you a little bit, but the actual liftoff shakes your entire body and soul.

There is no gene for such unambiguous bits of morphology as your left kneecap or your fingernail ... Hundreds of genes contribute to the building of most body parts and their action is channeled through a kaleidoscopic series of environmental influences: embryonic and postnatal, internal and external. Parts are not translated genes, and selection doesnt even work directly on parts.

We are a bit of stellar matter gone wrong. We are physical machinerypuppets that strut and talk and laugh and die as the hand of time pulls the strings beneath. But there is one elementary inescapable answer. We are that which asks the question.

Without the hard little bits of marble which are called 'facts' or 'data' one cannot compose a mosaic; what matters, however, are not so much the individual bits, but the successive patterns into which you arrange them, then break them up and rearrange them.

[It] is not the nature of things for any one man to make a sudden, violent discovery; science goes step by step and every man depends on the work of his predecessors. When you hear of a sudden unexpected discoverya bolt from the blueyou can always be sure that it has grown up by the influence of one man or another, and it is the mutual influence which makes the enormous possibility of scientific advance. Scientists are not dependent on the ideas of a single man, but on the combined wisdom of thousands of men, all thinking of the same problem and each doing his little bit to add to the great structure of knowledge which is gradually being erected.

Concluding remark in Lecture ii (1936) on 'Forty Years of Physics', revised and prepared for publication by J.A. Ratcliffe, collected in Needham and Pagel (eds.), Background to Modern Science: Ten Lectures at Cambridge Arranged by the History of Science Committee, (1938), 73-74. Note that the words as prepared for publication may not be verbatim as spoken in the original lecture by the then late Lord Rutherford.

As quoted in Theodore Levitt, The Marketing Imagination (1983, 1986), 128. The quote is sometimes attributed to Theodore Levitt, who popularized it. If you know biographical information about Leo McGinneva, please contact Webmaster.