A painter makes patterns with shapes and colours, a poet with words. A painting may embody an idea, but the idea is usually commonplace and unimportant. In poetry, ideas count for a good deal more; but, as Housman insisted, the importance of ideas in poetry is habitually exaggerated.  The poverty of ideas seems hardly to affect the beauty of the verbal pattern. A mathematician, on the other hand, has no material to work with but ideas, and so his patterns are likely to last longer, since ideas wear less with time than words.

A peculiar beauty reigns in the realm of mathematics, a beauty which resembles not so much the beauty of art as the beauty of nature and which affects the reflective mind, which has acquired an appreciation of it, very much like the latter.

From Berliner Monatsberichte (1867), 395. As translated in Robert Édouard Moritz, Memorabilia Mathematica; Or, The Philomaths Quotation-book (1914), 185.

Cosmology does, I think, affect the way that we perceive humanitys role in nature. One thing weve learnt from astronomy is that the future lying ahead is more prolonged than the past. Even our sun is less than halfway through its life.

Earlier this week  scientists announced the completion of a task that once seemed unimaginable; and that is, the deciphering of the entire DNA sequence of the human genetic code. This amazing accomplishment is likely to affect the 21st century as profoundly as the invention of the computer or the splitting of the atom affected the 20th century. I believe that the 21st century will be the century of life sciences, and nothing makes that point more clearly than this momentous discovery. It will revolutionize medicine as we know it today.

It is not sufficient to see and to know the beauty of a work. We must feel and be affected by it.

Music and poesy use to quicken you;
The mathematics and the metaphysics
Fall to them as you find your stomach serves you.
No profit grows where is no pleasure taen:
In brief, sir, study what you most affect. 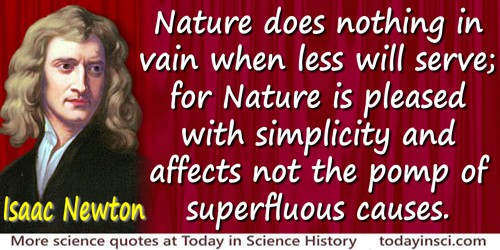 Nature does nothing in vain when less will serve; for Nature is pleased with simplicity and affects not the pomp of superfluous causes.

No serious student of human behavior denies the potent influence of evolved biology upon our cultural lives. Our struggle is to figure out how biology affects us, not whether it does.

Not enough of our society is trained how to understand and interpret quantitative information. This activity is a centerpiece of science literacy to which we should all strivethe future health, wealth, and security of our democracy depend on it. Until that is achieved, we are at risk of making under-informed decisions that affect ourselves, our communities, our country, and even the world.

Technology can relieve the symptoms of a problem without affecting the underlying causes. Faith in technology as the ultimate solution to all problems can thus divert our attention from the most fundamental problemthe problem of growth in a finite system

That which can affect our senses in any manner whatever, is termed matter.

The constructions of the mathematical mind are at the same time free and necessary. The individual mathematician feels free to define his notions and set up his axioms as he pleases. But the question is will he get his fellow-mathematician interested in the constructs of his imagination. We cannot help the feeling that certain mathematical structures which have evolved through the combined efforts of the mathematical community bear the stamp of a necessity not affected by the accidents of their historical birth. Everybody who looks at the spectacle of modern algebra will be struck by this complementarity of freedom and necessity.

The sociological context of the times [affects education]. Some people call it television cultureyoure supposed to be able to get everything in 30 seconds, a sort of quiz-show attitude.

Recognizing in education a declining dedication to rigorous thinking and the fact that things are really hard to understand. In interview, Rushworth M. Kidder, 'Grounded in Space Science', Christian Science Monitor (22 Dec 1989).

Today every city, town, or village is affected by it. We have entered the Neon Civilization and become a plastic world.. It goes deeper than its visual manifestations, it affects moral matters; we are engaged, as astrophysicists would say, on a decaying orbit.

You have probably heard or said at some point, I could not live without my cell phone. Well, the world cannot live without the Arctic; it affects every living thing on Earth and acts as a virtual thermostat, reflecting sunlight and cooling the planet.