Thomasina: Every week I plot your equations dot for dot, xs against ys in all manner of algebraical relation, and every week they draw themselves as commonplace geometry, as if the world of forms were nothing but arcs and angles. Gods truth, Septimus, if there is an equation for a curve like a bell, there must be an equation for one like a bluebell, and if a bluebell, why not a rose? Do we believe nature is written in numbers?
Septimus: We do.
Thomasina: Then why do your shapes describe only the shapes of manufacture?
Septimus: I do not know.
Thomasina: Armed thus, God could only make a cabinet.

A painter makes patterns with shapes and colours, a poet with words. A painting may embody an idea, but the idea is usually commonplace and unimportant. In poetry, ideas count for a good deal more; but, as Housman insisted, the importance of ideas in poetry is habitually exaggerated.  The poverty of ideas seems hardly to affect the beauty of the verbal pattern. A mathematician, on the other hand, has no material to work with but ideas, and so his patterns are likely to last longer, since ideas wear less with time than words.

A science or an art may be said to be useful if its development increases, even indirectly, the material well-being and comfort of men, it promotes happiness, using that word in a crude and commonplace way.

And so the great truth, now a paradox, may become a commonplace, that man is greater than his surroundings, and that the production of a breed of men and women, even in our great cities, less prone to disease, and pain, more noble in aspect, more rational in habits, more exultant in the pure joy of living, is not only scientifically possible, but that even the partial fulfillment of this dream, if dream it be, is the most worthy object towards which the lover of his kind can devote the best energies of his life.

Be daring, be different, be impractical; be anything that will assert integrity of purpose and imagination vision against the play-it-safers, the creatures of the commonplace, the slave of the ordinary.

Doesnt it strike you as odd
That a commonplace fellow like Todd Should spell if you please,
His name with two Ds.
When one is sufficient for God.

Quoted by M. G. De St. V. Atkins, The Times (22 Jan 1997), from memory of a conversation with 'an American tribiologist' who recalled it as current when he was an undergraduate at Christ's College. 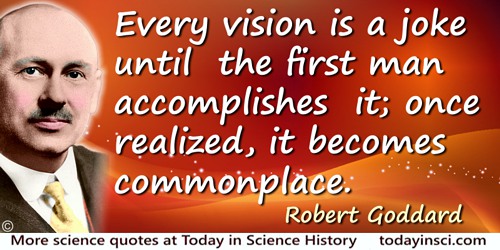 Every vision is a joke until the first man accomplishes it; once realized, it becomes commonplace.

His reaction to a harsh, inaccurate, article in the New York Times that questioned the practicality of his goals in rocket research, (1920). As quoted by Dr. Kurt Debus, Director of Kennedy Space Center, NASA, in address (15 Jul 1965) at First World Exhibition of Transport and communications, Munich, collected in Chronology on Astronautics and Aeronautics in 1965 (1966), 332. This is the earliest evidence of this quote that Webmaster, as yet, has found. Please contact Webmaster if you know the primary source.

If the kind of controversy which so often springs up between modernism and traditionalism in religion were applied to more commonplace affairs of life we might see some strange results. It arises, let us say, from a passage in an obituary notice which mentions that the deceased had loved to watch the sunsets from his peaceful country home.. it is forgotten that what the deceased man looked out for each evening was an experience and not a creed.

It is a commonplace of modern technology that problems have solutions before there is knowledge of how they are to be solved.

It is rather astonishing how little practical value scientific knowledge has for ordinary men, how dull and commonplace such of it as has value is, and how its value seems almost to vary inversely to its reputed utility.

Keep in mind that new ideas are commonplace, and almost always wrong. Most flashes of insight lead nowhere; statistically, they have a half-life of hours or maybe days. Most experiments to follow up the surviving insights are tedious and consume large amounts of time, only to yield negative or (worse!) ambiguous results.

As quoted, without citation, in Richard D Pepperman, The Eye is Quicker (2004), xv.

My imagination would never have served me as it has, but for the habit of commonplace, humble, patient, daily, toiling, drudging attention

Science is wonderful at destroying metaphysical answers, but incapable of providing substitute ones. Science takes away foundations without providing a replacement. Whether we want to be there or not, science has put us in the position of having to live without foundations. It was shocking when Nietzsche said this, but today it is commonplace; our historical position—and no end to it is in sight—is that of having to philosophise without 'foundations'.

In Hilary Putnam (ed.), The Many Faces of Realism: The Paul Carns Lectures (1987), 29. Excerpt 'Realism and Reasonableness', in Joseph Margolis and Jacques Catudal, The Quarrel between Invariance and Flux (2001), 122.

Therefore it is by no means an idle game if we become practiced in analysing long-held commonplace concepts and showing the circumstances on which their justification and usefulness depend, and how they have grown up, individually, out of the givens of experience. Thus their excessive authority will be broken.

We may lay it down that a happy person never phantasises, only an unsatisfied one... The motive forces of phantasies are unsatisfied wishes, and every single phantasy is the fulfilment of a wish, a correction of unsatisfying reality. These motivating wishes vary according to the sex, character and circumstances of the person who is having the phantasy; but they fall naturally into two main groups. They are either ambitious wishes, which serve to elevate the subject's personality; or they are erotic ones. It was shocking when Nietzsche said this, but today it is commonplace; our historical positionand no end to it is in sightis that of having to philosophise without 'foundations'.

The present revolution of scientific thought follows in natural sequence on the great revolutions at earlier epochs in the history of science. Einsteins special theory of relativity, which explains the indeterminateness of the frame of space and time, crowns the work of Copernicus who first led us to give up our insistence on a geocentric outlook on nature; Einstein's general theory of relativity, which reveals the curvature or non-Euclidean geometry of space and time, carries forward the rudimentary thought of those earlier astronomers who first contemplated the possibility that their existence lay on something which was not flat. These earlier revolutions are still a source of perplexity in childhood, which we soon outgrow; and a time will come when Einsteins amazing revelations have likewise sunk into the commonplaces of educated thought.

In The Theory of Relativity and its Influence on Scientific Thought (1922), 31-32