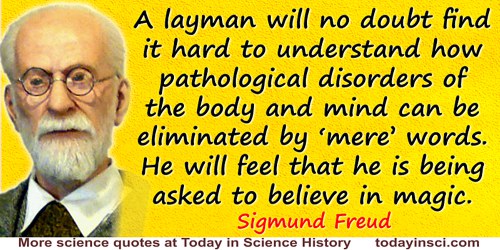 A layman will no doubt find it hard to understand how pathological disorders of the body and mind can be eliminated by 'mere' words. He will feel that he is being asked to believe in magic. And he will not be so very wrong, for the words which we use in our everyday speech are nothing other than watered-down magic. But we shall have to follow a roundabout path in order to explain how science sets about restoring to words a part at least of their former magical power.

Any man who is intelligent must, on considering that health is of the utmost value to human beings, have the personal understanding necessary to help himself in diseases, and be able to understand and to judge what physicians say and what they administer to his body, being versed in each of these matters to a degree reasonable for a layman.

By a recent estimate, nearly half the bills before the U.S. Congress have a substantial science-technology component and some two-thirds of the District of Columbia Circuit Courts case load now involves review of action by federal administrative agencies; and more and more of such cases relate to matters on the frontiers of technology.
If the layman cannot participate in decision making, he will have to turn himself over, essentially blind, to a hermetic elite.  [The fundamental question becomes] are we still capable of self-government and therefore freedom?
Margaret Mead wrote in a 1959 issue of Daedalus about scientists elevated to the status of priests. Now there is a name for this elevation, when you are in the hands ofone hopesa benevolent elite, when you have no control over your political decisions. From the point of view of John Locke, the name for this is slavery.

Quoted in 'Where is Science Taking Us? Gerald Holton Maps the Possible Routes', The Chronicle of Higher Education (18 May 1981). In Francis A. Schaeffer, A Christian Manifesto (1982), 80.

For scholars and laymen alike it is not philosophy but active experience in mathematics itself that can alone answer the question: What is mathematics?

As co-author with Herbert Robbins, in What Is Mathematics?: An Elementary Approach to Ideas and Methods (1941, 1996), xiii.

He who is unfamiliar with mathematics remains more or less a stranger to our time.

If any layman were to ask a number of archaeologists to give, on the spur of the moment, a definition of archaeology, I suspect that such a person might find the answers rather confusing. He would, perhaps, sympathize with Socrates who, when he hoped to learn from the poets and artisans something about the arts they practised, was forced to go away with the conviction that, though they might themselves be able to accomplish something, they certainly could give no clear account to others of what they were trying to do.

If we do discover a complete unified theory, it should be in time understandable in broad principle by everyone, not just a few scientists. Then we shall all, philosophers, scientists and just ordinary people, be able to take part in the discussion of why it is that we and the universe exist. If we find the answer to that, it would be the ultimate triumph of human reasonfor then we would know the mind of God.

In scientific thought we adopt the simplest theory which will explain all the facts under consideration and enable us to predict new facts of the same kind. The catch in this criterion lies in the world simplest. It is really an aesthetic canon such as we find implicit in our criticisms of poetry or painting. The layman finds such a law as dx/dt = κ(d²x/dy²) much less simple than it oozes, of which it is the mathematical statement. The physicist reverses this judgment, and his statement is certainly the more fruitful of the two, so far as prediction is concerned. It is, however, a statement about something very unfamiliar to the plain man, namely the rate of change of a rate of change.

Isolated, so-called pretty theorems have even less value in the eyes of a modern mathematician than the discovery of a new pretty flower has to the scientific botanist, though the layman finds in these the chief charm of the respective Sciences.

It is one of the little ironies of our times that while the layman was being indoctrinated with the stereotype image of black holes as the ultimate cookie monsters, the professionals have been swinging round to the almost directly opposing view that black holes, like growing old, are really not so bad when you consider the alternative.

Making mathematics accessible to the educated layman, while keeping high scientific standards, has always been considered a treacherous navigation between the Scylla of professional contempt and the Charybdis of public misunderstanding.

Scientists alone can establish the objectives of their research, but society, in extending support to science, must take account of its own needs. As a layman, I can suggest only with diffidence what some of the major tasks might be on your scientific agenda, but  First, I would suggest the question of the conservation and development of our natural resources. In a recent speech to the General Assembly of the United Nations, I proposed a world-wide program to protect land and water, forests and wildlife, to combat exhaustion and erosion, to stop the contamination of water and air by industrial as well as nuclear pollution, and to provide for the steady renewal and expansion of the natural bases of life.

The layman is delighted to learn that after all, in spite of science being so impossibly difficult to understand, Scientists Are Human!

The mathematic, then, is an art. As such it has its styles and style periods. It is not, as the layman and the philosopher (who is in this matter a layman too) imagine, substantially unalterable, but subject like every art to unnoticed changes form epoch to epoch. The development of the great arts ought never to be treated without an (assuredly not unprofitable) side-glance at contemporary mathematics.

The recent ruling by the Supreme Court restricting obscenity in books, magazines and movies, requires that we re-examine our own journals for lewd contents. The recent chemical literature provides many examples of words and concepts whose double meaning and thinly veiled overtones are an affront to all clean chemists. What must a layman think of coupling constants, tickling techniques, or indeed increased overlap? The bounds of propriety are surely exceeded when heterocyclic chemists discuss homoenolization.

We need science education to produce scientists, but we need it equally to create literacy in the public. Man has a fundamental urge to comprehend the world about him, and science gives today the only world picture which we can consider as valid. It gives an understanding of the inside of the atom and of the whole universe, or the peculiar properties of the chemical substances and of the manner in which genes duplicate in biology. An educated layman can, of course, not contribute to science, but can enjoy and participate in many scientific discoveries which as constantly made. Such participation was quite common in the 19th century, but has unhappily declined. Literacy in science will enrich a persons life.

Whenever there is a simple error that most laymen fall for, there is always a slightly more sophisticated version of the same problem that experts fall for.

As quoted in Brooks Jackson and Kathleen Hall Jamieson, unSpun: Finding Facts in a World of Disinformation (2007), 70-71.