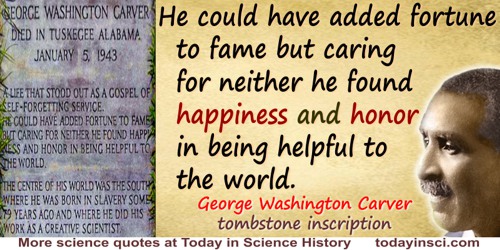 A life that stood out as a gospel of self-forgetting service.
He could have added fortune to fame but caring for neither he found happiness and honor in being helpful to the world.
The centre of his world was the south where he was born in slavery some 79 years ago and where he did his work as a creative scientist.

By a recent estimate, nearly half the bills before the U.S. Congress have a substantial science-technology component and some two-thirds of the District of Columbia Circuit Courts case load now involves review of action by federal administrative agencies; and more and more of such cases relate to matters on the frontiers of technology.
If the layman cannot participate in decision making, he will have to turn himself over, essentially blind, to a hermetic elite.  [The fundamental question becomes] are we still capable of self-government and therefore freedom?
Margaret Mead wrote in a 1959 issue of Daedalus about scientists elevated to the status of priests. Now there is a name for this elevation, when you are in the hands ofone hopesa benevolent elite, when you have no control over your political decisions. From the point of view of John Locke, the name for this is slavery.

Quoted in 'Where is Science Taking Us? Gerald Holton Maps the Possible Routes', The Chronicle of Higher Education (18 May 1981). In Francis A. Schaeffer, A Christian Manifesto (1982), 80.

It is better to go near the truth and be imprisoned than to stay with the wrong and roam about freely, master Galilei. In fact, getting attached to falsity is terrible slavery, and real freedom is only next to the right.

Magnetism, galvanism, electricity, are one form of many names. Without magnetism we should never have discovered America; to which we are indebted for nothing but evil; diseases in the worst forms that can afflict humanity, and slavery in the worst form in which slavery can exist. The Old World had the sugar-cane and the cotton-plant, though it did not so misuse them.

Written for fictional character, the Rev. Dr. Opimian, in Gryll Grange (1861), collected in Sir Henry Cole (ed.) The Works of Thomas Love Peacock(1875), Vol. 2, 382. [Hans Øersted discovered electromagnetism in 1820. Presumably the next reference to magnetism refers to a compass needle for navigation. Webmaster]

One of the gladdest moments of human life, methinks, is the departure upon a distant journey into unknown lands. Shaking off with one mighty effort the fetters of habit, the leaden weight of routine, the cloak of many cares and the slavery of home, man feel once more happy.

Science would have us believe that such accuracy, leading to certainty, is the only criterion of knowledge, would make the trial of Galileo the paradigm of the two points of view which aspire to truth, would suggest, that is, that the cardinals represent only superstition and repression, while Galileo represents freedom. But there is another criterion which is systematically neglected in this elevation of science. Man does not nowand will not everlive by the bread of scientific method alone. He must deal with life and death, with love and cruelty and despair, and so must make conjectures of great importance which may or may not be true and which do not lend themselves to experimentation: It is better to give than to receive; Love thy neighbor as thyself; Better to risk slavery through non-violence than to defend freedom with murder. We must deal with such propositions, must decide whether they are true, whether to believe them, whether to act on themand scientific method is no help for by their nature these matters lie forever beyond the realm of science.

Slavery in America was perpetuated not merely by human badness but also by human blindness.  Men convinced themselves that a system that was so economically profitable must be morally justifiable.  Science was commandeered to prove the biological inferiority of the Negro. Even philosophical logic was manipulated [exemplified by] an Aristotlian syllogism:
All men are made in the image of God;
God, as everyone knows, is not a Negro;
Therefore, the Negro is not a man.

Some few, & I am one, even wish to God, though at the loss of millions of lives, that the North would proclaim a crusade against Slavery. In the long run, a million horrid deaths would be amply repaid in the cause of humanity. ... Great God how I shd like to see that greatest curse on Earth Slavery abolished.

Letter to Asa Gray (5 Jun 1861). In Charles Darwin, Frederick Burkhardt, Sydney Smith, The Correspondence of Charles Darwin: Vol. 9, 1861 (1994), xx. An attack by Confederate forces at Fort Sumter on 12 Apr 1861 marked the beginning of the American Civil war. In Sep 1862, President Lincoln's Emancipation Proclamation made ending slavery in the South a goal of the war. (Lincoln and Darwin were born on the same day.)

Thus died Negro Tom [Thomas Fuller], this untaught arithmetician, this untutored scholar. Had his opportunities of improvement been equal to those of thousands of his fellow-men, neither the Royal Society of London, the Academy of Science at Paris, nor even a Newton himself need have been ashamed to acknowledge him a brother in science.
[Thomas Fuller (1710-1790), although enslaved from Africa at age 14, was an arithmetical prodigy. He was known as the Virginia Calculator because of his exceptional ability with arithmetic calculations. His intellectual accomplishments were related by Dr. Benjamin Rush in a letter read to the Pennsylvania Society for the Abolition of Slavery.]

While government and laws provide for the safety and well-being of assembled men, the sciences, letters and arts, less despotic and perhaps more powerful, spread garlands of flowers over the iron chains with which men are burdened, stifle in them the sense of that original liberty for which they seemed to have been born, make them love their slavery, and turn them into what is called civilized peoples.

[Alexander the Great] was often extremely brutal to his captives, whom he sold into slavery, tortured to death, or forced to learn Greek.

In The Decline and Fall of Practically Everybody (1950), 42, footnote.