A short, broad man of tremendous vitality, the physical type of Hereward, the last of the English, and his brother-in-arms, Winter, Sylvesters capacious head was ever lost in the highest cloud-lands of pure mathematics. Often in the dead of night he would get his favorite pupil, that he might communicate the very last product of his creative thought. Everything he saw suggested to him something new in the higher algebra. This transmutation of everything into new mathematics was a revelation to those who knew him intimately. They began to do it themselves. His ease and fertility of invention proved a constant encouragement, while his contempt for provincial stupidities, such as the American hieroglyphics for π and e, which have even found their way into Websters Dictionary, made each young worker apply to himself the strictest tests.

As the air to a bird, or the sea to a fish, so is contempt to the contemptible.

Even in Europe a change has sensibly taken place in the mind of man. Science has liberated the ideas of those who read and reflect, and the American example has kindled feelings of right in the people. An insurrection has consequently begun of science talents and courage against rank and birth, which have fallen into contempt. It has failed in its first effort, because the mobs of the cities, the instrument used for its accomplishment, debased by ignorance, poverty and vice, could not be restrained to rational action. But the world will soon recover from the panic of this first catastrophe.

He that would look with contempt on the pursuits of the farmer, is not worthy of the name of a man.

His [Thomas Edison] method was inefficient in the extreme, for an immense ground had to be covered to get anything at all unless blind chance intervened and, at first, I was almost a sorry witness of his doings, knowing that just a little theory and calculation would have saved him 90 per cent of the labor. But he had a veritable contempt for book learning and mathematical knowledge, trusting himself entirely to his inventor's instinct and practical American sense. In view of this, the truly prodigious amount of his actual accomplishments is little short of a miracle.

If the whole of the English language could be condensed into one word, it would not suffice to express the utter contempt those invite who are so deluded as to be disciples of such an imposture as Darwinism.

It must be admitted that science has its castes. The man whose chief apparatus is the differential equation looks down upon one who uses a galvanometer, and he in turn upon those who putter about with sticky and smelly things in test tubes. But all of these, and most biologists too, join together in their contempt for the pariah who, not through a glass darkly, but with keen unaided vision, observes the massing of a thundercloud on the horizon, the petal as it unfolds, or the swarming of a hive of bees. And yet sometimes I think that our laboratories are but little earthworks which men build about themselves, and whose puny tops too often conceal from view the Olympian heights; that we who work in these laboratories are but skilled artisans compared with the man who is able to observe, and to draw accurate deductions from the world about him. 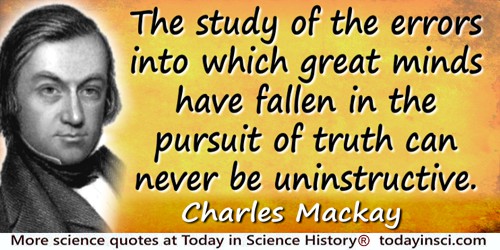 Let us not, in the pride of our superior knowledge, turn with contempt from the follies of our predecessors. The study of the errors into which great minds have fallen in the pursuit of truth can never be uninstructive.

Making mathematics accessible to the educated layman, while keeping high scientific standards, has always been considered a treacherous navigation between the Scylla of professional contempt and the Charybdis of public misunderstanding.

Naturam expelles furca, tamen usque recurret,
Et mala perrumpet furtim fastidia victrix.
[Drive Nature out with a pitchfork, yet she hurries back,
And will burst through your foolish contempt, triumphant.]

From Epistles, i, x, 24. First line as translated by Ralph Waldo Emerson. Second line Google translation by Webmaster. English variants, from 1539 and later, are given in George Latimer Apperson and Martin H. Manser, The Concise Dictionary of English Etymology (1993, 2006), 158.

The history of science is a record of the transformations of contempts amd amusements.

Those who knew that the judgements of many centuries had reinforced the opinion that the Earth is placed motionless in the middle of heaven, as though at its centre, if I on the contrary asserted that the Earth moves, I hesitated for a long time whether to bring my treatise, written to demonstrate its motion, into the light of day, or whether it would not be better to follow the example of the Pythagoreans and certain others, who used to pass on the mysteries of their philosophy merely to their relatives and friends, not in writing but by personal contact, as the letter of Lysis to Hipparchus bears witness. And indeed they seem to me to have done so, not as some think from a certain jealousy of communicating their doctrines, but so that their greatest splendours, discovered by the devoted research of great men, should not be exposed to the contempt of those who either find it irksome to waste effort on anything learned, unless it is profitable, or if they are stirred by the exhortations and examples of others to a high-minded enthusiasm for philosophy, are nevertheless so dull-witted that among philosophers they are like drones among bees.

To punish me for my contempt for authority, fate made me an authority myself.

To punish me for my contempt of authority, Fate has made me an authority myself.

When I was living with the Indians, my hostess, a fine looking woman, who wore numberless bracelets, and rings in her ears and on her fingers, and painted her face like a brilliant sunset, one day gave away a very fine horse. I was surprised, for I knew there had been no family talk on the subject, so I asked: Will your husband like to have you give the horse away? Her eyes danced, and, breaking into a peal of laughter, she hastened to tell the story to the other women gathered in the tent, and I became the target of many merry eyes. I tried to explain how a white woman would act, but laughter and contempt met my explanation of the white mans hold upon his wifes property.

[Concerning] the usual contempt with which an orthodox analytic group treats all outsiders and strangers ... I urge you to think of the young psychoanalysts as your colleagues, collaborators and partners and not as spies, traitors and wayward children. You can never develop a science that way, only an orthodox church.