From 'Introduction', La Science et lHypothèse (1902), 2. Translation by George Bruce Halsted, 'Introduction', Science and Hypothesis (New York, 1905), 1. In 'Authors Preface', Science and Hypothesis (London 1905), xxii, it is translated more closely as To doubt everything and to believe everything are two equally convenient solutions; both dispense with the necessity of reflection.

From man or angel the great Architect did wisely to conceal, and not divulge his secrets to be scanned by them who ought rather admire; or if they list to try conjecture, he his fabric of the heavens left to their disputes, perhaps to move his laughter at their quaint opinions wide hereafter, when they come to model heaven calculate the stars, how they will wield the mighty frame, how build, unbuild, contrive to save appearances, how gird the sphere with centric and eccentric scribbled oer, and epicycle, orb in orb.

His [Thomas Edison] method was inefficient in the extreme, for an immense ground had to be covered to get anything at all unless blind chance intervened and, at first, I was almost a sorry witness of his doings, knowing that just a little theory and calculation would have saved him 90 per cent of the labor. But he had a veritable contempt for book learning and mathematical knowledge, trusting himself entirely to his inventor's instinct and practical American sense. In view of this, the truly prodigious amount of his actual accomplishments is little short of a miracle.

I believe television is going to be the test of the modern world, and that in this new opportunity to see beyond the range of our vision we shall discover either a new and unbearable disturbance of the general peace or a saving radiance in the sky. We shall stand or fall by televisionof that I am quite sure

I dont think necessity is the mother of invention. Invention, in my opinion, arises directly from idleness, possibly also from lazinessto save oneself trouble.

I say it is impossible that so sensible a people [citizens of Paris], under such circumstances, should have lived so long by the smoky, unwholesome, and enormously expensive light of candles, if they had really known that they might have had as much pure light of the sun for nothing.
[Describing the energy-saving benefit of adopting daylight saving time. (1784)]

'An Economical Project', The Life and Miscellaneous Writings of Benjamin Franklin (1839), 58. A translation of this letter appeared in one of the Paris daily papers about 1784. He estimated, during six months, a saving of over 64 million pound weight of candles, worth over 96 million livres tournois.

If he [Thomas Edison] had a needle to find in a haystack, he would not stop to reason where it was most likely to be, but would proceed at once with the feverish diligence of a bee, to examine straw after straw until he found the object of his search.  [J]ust a little theory and calculation would have saved him ninety percent of his labor.

If the patient dies, the doctor has killed him; if he gets well, the saints have saved him.

If you want to achieve conservation, the first thing you have to do is persuade people that the natural world is precious, beautiful, worth saving and complex. If people dont understand that and dont believe that in their hearts, conservation doesn't stand a chance. Thats the first step, and that is what I do.

It is when physicians are bogged down  when they lack a clear understanding of disease mechanisms, that the deficiencies of the health-care system are most conspicuous. If I were a policy-maker, interested in saving money for health care over the long haul, I would regard it as an act of high prudence to give high priority to a lot more basic research in biologic science.

Kilometers are shorter than miles. Save gas, take your next trip in kilometers.

The atom bomb was no great decision. It was used in the war, and for your information, there were more people killed by fire bombs in Tokyo than dropping of the atomic bombs accounted for. It was merely another powerful weapon in the arsenal of righteousness. The dropping of the bombs stopped the war, save millions of lives.

The commissioners of the treasury moved the king, for the relief of his estate, to disafforest some forests of his, explaining themselves of such forests as lay out of the way, not near any of the kings houses, nor in the course of his progress; whereof he should never have use nor pleasure. Why, saith the king, do you think that Solomon had use and pleasure of all his three hundred concubines?

In 'A Collection of Apophthegms, New and Old' (1625). As given in Essays, Moral, Economical, and Political: A New Edition, With the Latin Quotations Translated (1813), No. 9, 262. King James I was named in the preceding Apophthegm No. 3.

The same society which receives the rewards of technology must, as a cooperating whole, take responsibility for control. To deal with these new problems will require a new conservation. We must not only protect the countryside and save it from destruction, we must restore what has been destroyed and salvage the beauty and charm of our cities. Our conservation must be not just the classic conservation of protection and development, but a creative conservation of restoration and innovation. Its concern is not with nature alone, but with the total relation between man and the world around him. Its object is not just man's welfare, but the dignity of man's spirit.

In his 'Message to Congress on Conservation and Restoration of Natural Beauty' written to Congress (8 Feb 1965). It was a broad initiative aimed at beautifying America, guaranteeing water and air quality, and preserving natural areas. In Lyndon B. Johnson: Containing the Public Messages, Speeches, and Statements of the President (1965), Vol.1, 156. United States. President (1963-1969 : Johnson), Lyndon Baines Johnson, United States. Office of the Federal Register - 1970

This is the patent-age of new inventions
For killing bodies, and for saving souls,
All propagated with the best intentions;
Sir Humphrey Davy's lantern, by which coals
Are safely mined for in the mode he mentions,
Tombuctoo travels, voyages to the Poles,
Are ways to benefit mankind, as true,
Perhaps, as shooting them at Waterloo.

To have a railroad, there must have been first the discoverers, who found out the properties of wood and iron, fire and water, and their latent power to carry men over the earth; next the organizers, who put these elements together, surveyed the route, planned the structure, set men to grade the hill, to fill the valley, and pave the road with iron bars; and then the administrators, who after all that is done, procure the engines, engineers, conductors, ticket-distributors, and the rest of the hands; they buy the coal and see it is not wasted, fix the rates of fare, calculate the savings, and distribute the dividends. The discoverers and organizers often fare hard in the world, lean men, ill-clad and suspected, often laughed at, while the administrator is thought the greater man, because he rides over their graves and pays the dividends, where the organizer only called for the assessments, and the discoverer told what men called a dream. What happens in a railroad happens also in a Church, or a State.

Address at the Melodeon, Boston (5 Mar 1848), 'A Discourse occasioned by the Death of John Quincy Adams'. Collected in Discourses of Politics: The Collected Works of Theodore Parker: Part 4 (1863), 139. Note: Ralph Waldo Emerson earlier used the phrase pave the road with iron bars, in Nature (1836), 17.

What animates a great pathologist? Is it the desire to cure disease, to save life? Surely not, save perhaps as an afterthought. He is too intelligent, deep in his soul, to see anything praiseworthy in such a desire. He knows from life-long observation that his discoveries will do quite as much harm as good, that a thousand scoundrels will profit to every honest man, that the folks who most deserve to be saved will probably be the last to be saved. ... What actually moves him is his unquenchable curiosity—his boundless, almost pathological thirst to penetrate the unknown, to uncover the secret, to find out what has not been found out before. ... [like] the dog sniffing tremendously at an infinite series of rat-holes. ... And yet he stands in the very front rank of the race 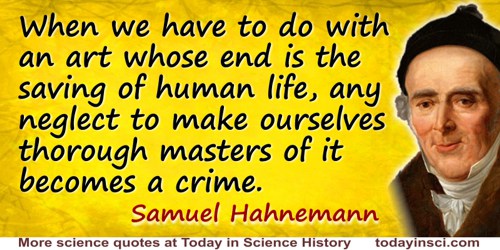 When we have to do with an art whose end is the saving of human life, any neglect to make ourselves thorough masters of it becomes a crime.

Quoted without citation in United States Medical Investigator (1885), 21, 521. Seen in various other later publications, but also without citation. If you know the primary source, please contact Webmaster.

[My work as a photographer is a] mission to document endangered species and landscapes in order to show a world worth saving.