Basic research at universities comes in two varieties: research that requires big bucks and research that requires small bucks. Big bucks research is much like government research and in fact usually is government research but done for the government under contract. Like other government research, big bucks academic research is done to understand the nature and structure of the universe or to understand life, which really means that it is either for blowing up the world or extending life, whichever comes first. Again, that's the government's motivation. The universities' motivation for conducting big bucks research is to bring money in to support professors and graduate students and to wax the floors of ivy-covered buildings. While we think they are busy teaching and learning, these folks are mainly doing big bucks basic research for a living, all the while priding themselves on their terrific summer vacations and lack of a dress code.
Smalls bucks research is the sort of thing that requires paper and pencil, and maybe a blackboard, and is aimed primarily at increasing knowledge in areas of study that don't usually attract big bucks - that is, areas that don't extend life or end it, or both. History, political science, and romance languages are typically small bucks areas of basic research. The real purpose of small bucks research to the universities is to provide a means of deciding, by the quality of their small bucks research, which professors in these areas should get tenure.

As quoted by Walter Gratzer, in book review titled 'The Bomb and the Bumble-Bees' (about the book Late Night Thoughts, by Lewis Thomas), Nature (15 Nov 1984), 31, 211. The original text expresses the quote as It was the organic chemist, Homer Adkins, who defined basic research as shooting an arrow into the air, and.

Basic research is not the same as development. A crash program for the latter may be successful; but for the former it is like trying to make nine women pregnant at once in the hope of getting a baby in a months time. 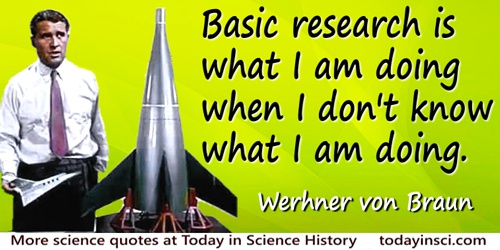 Basic research may seem very expensive. I am a well-paid scientist. My hourly wage is equal to that of a plumber, but sometimes my research remains barren of results for weeks, months or years and my conscience begins to bother me for wasting the taxpayers money. But in reviewing my lifes work, I have to think that the expense was not wasted.
Basic research, to which we owe everything, is relatively very cheap when compared with other outlays of modern society. The other day I made a rough calculation which led me to the conclusion that if one were to add up all the money ever spent by man on basic research, one would find it to be just about equal to the money spent by the Pentagon this past year.

It is when physicians are bogged down  when they lack a clear understanding of disease mechanisms, that the deficiencies of the health-care system are most conspicuous. If I were a policy-maker, interested in saving money for health care over the long haul, I would regard it as an act of high prudence to give high priority to a lot more basic research in biologic science.

The justification for [basic research] is that this constitutes the fount of all new knowledge, without which the opportunities for further technical progress must eventually become exhausted.

This is the element that distinguishes applied science from basic. Surprise is what makes the difference. When you are organized to apply knowledge, set up targets, produce a usable product, you require a high degree of certainty from the outset. All the facts on which you base protocols must be reasonably hard facts with unambiguous meaning. The challenge is to plan the work and organize the workers so that it will come out precisely as predicted. For this, you need centralized authority, elaborately detailed time schedules, and some sort of reward system based on speed and perfection. But most of all you need the intelligible basic facts to begin with, and these must come from basic research. There is no other source. In basic research, everything is just the opposite. What you need at the outset is a high degree of uncertainty; otherwise it isnt likely to be an important problem. You start with an incomplete roster of facts, characterized by their ambiguity; often the problem consists of discovering the connections between unrelated pieces of information. You must plan experiments on the basis of probability, even bare possibility, rather than certainty.

Why do we do basic research? To learn about ourselves.

Willis Rodney Whitney ... once compared scientific research to a bridge being constructed by a builder who was fascinated by the construction problems involved. Basic research, he suggested, is such a bridge built wherever it strikes the builder's fancywherever the construction problems seem to him to be most challenging. Applied research, on the other hand, is a bridge built where people are waiting to get across the river. The challenge to the builder's ingenuity and skill, Whitney pointed out, can be as great in one case as the other.