As quoted in magazine article, an interview by John McCormick, 'Computer Security as a Business Enabler', Baseline (7 Jul 2007).

By the advance of civilization, a sharper and more healthy form of competition is brought about. The markets have become more fastidious; and he who puts such a product upon the market as it demands controls that market, regardless of color. It is simply a survival of the fittest.

How have people come to be taken in by The Phenomenon of Man? Just as compulsory primary education created a market catered for by cheap dailies and weeklies, so the spread of secondary and latterly of tertiary education has created a large population of people, often with well-developed literary and scholarly tastes who have been educated far beyond their capacity to undertake analytical thought  [The Phenomenon of Man] is written in an all but totally unintelligible style, and this is construed as prima-facie evidence of profundity.

Medawars book review of The Phenomenon of Man by Teilhard de Chardin first appeared as 'Critical Notice' in the journal Mind (1961), 70, No. 277, 105. The book review was reprinted in The Art of the Soluble: Creativity and Originality in Science (1967).

I think that there is a world market for about five computers.

If atoms do, by chance, happen to combine themselves into so many shapes, why have they never combined together to form a house or a slipper? By the same token, why do we not believe that if innumerable letters of the Greek alphabet were poured all over the market-place they would eventually happen to form the text of the Iliad?

Ignorance and credulous hope make the market for most proprietary remedies.

It hurts the spirit, somehow, to read the word environments, when the plural means that there are so many alternatives there to be sorted through, as in a market, and voted on.

Many inventions are not suitable for the people at large because of their carelessness. Before a thing can be marketed to the masses, it must be made practically fool-proof. Its operation must be made extremely simple. That is one reason, I think, why the phonograph has been so universally adopted. Even a child can operate it.  Another reason is that people are far more willing to pay for being amused than for anything else.

Solar is now bankable. When solar was perceived as more risky it required a premium [and now its] becoming part of a much broader capital market.

As quoted by Christopher Martin in 'Solar 15% Returns Lure Investments From Google to Buffett', Bloomberg business Week (20 Mar 2012). The quote was referenced by Steven Cho when outlining progress in clean energy, in his letter (1 Feb 2013) to Energy Department employees announcing his decision not to serve a second term. 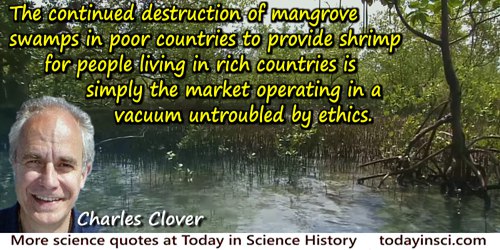 The continued destruction of mangrove swamps in poor countries to provide shrimp for people living in rich countries is simply the market operating in a vacuum untroubled by ethics.

The earliest of my childhood recollections is being taken by my grandfather when he set out in the first warm days of early spring with a grubbing hoe (we called it a mattock) on his shoulder to seek the plants, the barks and roots from which the spring medicine for the household was prepared. If I could but remember all that went into that mysterious decoction and the exact method of preparation, and with judicious advertisement put the product upon the market, I would shortly be possessed of wealth which might be made to serve the useful purpose of increasing the salaries of all pathologists.  But, alas! I remember only that the basic ingredients were dogwood bark and sassafras root, and to these were added q.s. bloodroot, poke and yellow dock. That the medicine benefited my grandfather I have every reason to believe, for he was a hale, strong old man, firm in body and mind until the infection came against which even spring medicine was of no avail. That the medicine did me good I well know, for I can see before me even now the green on the south hillside of the old pasture, the sunlight in the strip of wood where the dogwood grew, the bright blossoms and the delicate pale green of the leaf of the sanguinaria, and the even lighter green of the tender buds of the sassafras in the hedgerow, and it is good to have such pictures deeply engraved in the memory.

From address, 'A Medical Retrospect'. Published in Yale Medical Journal (Oct 1910), 17, No. 2, 57. [Note: q.s. in an abbreviation for quantum sufficit meaning as much as is sufficient, when used as a quantity specification in medicine and pharmacology. -Webmaster]

The oranges, it is true, are not all exactly of the same size, but careful machinery sorts them so that automatically all those in one box are exactly similar. They travel along with suitable things being done to them by suitable machines at suitable points until they enter a suitable refrigerator car in which they travel to a suitable market. The machine stamps the word Sunkist upon them, but otherwise there is nothing to suggest that nature has any part in their production.

The self-regulating mechanism of the market place cannot always be depended upon to produce adequate results in scientific research.

With co-author Byron S. Miller in The Control of Atomic Energy: A Study of Its Social, Economic, and Political Implications (1948), 17.

The simplest way to assure sales is to keep changing the product the market for new things is indefinitely elastic. One of the fundamental purposes of advertising, styling, and research is to foster a healthy dissatisfaction.

There are four classes of Idols which beset mens minds. To these for distinctions sake I have assigned names,calling the first class Idols of the Tribe; the second, Idols of the Cave; the third, Idols of the Market Place; the fourth, Idols of the Theatre
The Idols of the Tribe have their foundation in human nature itself, and in the tribe or race of men. For it is a false assertion that the sense of man is the measure of things. On the contrary, all perceptions as well of the sense as of the mind are according to the measure of the individual and not according to the measure of the universe. And the human understanding is like a false mirror, which, receiving rays irregularly, distorts and discolours the nature of things by mingling its own nature with it.
The Idols of the Cave are the idols of the individual man. For every one (besides the errors common to human nature in general) has a cave or den of his own, which refracts and discolours the light of nature; owing either to his own proper and peculiar nature; or to his education and conversation with others; or to the reading of books, and the authority of those whom he esteems and admires; or to the differences of impressions, accordingly as they take place in a mind preoccupied and predisposed or in a mind indifferent and settled; or the like.
There are also Idols formed by the intercourse and association of men with each other, which I call Idols of the Market-place, on account of the commerce and consort of men there. For it is by discourse that men associate; and words are imposed according to the apprehension of the vulgar, and therefore the ill and unfit choice of words wonderfully obstructs the understanding. Nor do the definitions or explanations where with in some things learned men are wont to guard and defend themselves, by any means set the matter right. But words plainly force and overrule the understanding, and throw all into confusion, and lead men away into numberless empty controversies and idle fancies.
Lastly, there are Idols which have immigrated into mens minds from the various dogmas of philosophies, and also from wrong laws of demonstration. These I call Idols of the Theatre; because in my judgment all the received systems are but so many stage-plays, representing worlds of their own creation after an unreal and scenic fashion.

There were many many things that were done in the 1920s that did not survive the long term test. Wing walking is not what you would call a real market.

As quoted by Braddock Gaskill, 'TGV Rockets Walking before they can run', on web page of nasaspaceflight.com (Sep 2005). Article includes explanation, One of the big business models was to fly up and take a picture of your house and sell it to you for $5.  That was a big deal.

When legacy firms fail to innovate, start-ups jump into the market and thrive at the establishments expense. Thats disruption.

You know that my apprehension is, that the thing may take a while, and for a while there may be an active demand for them, but that like any other novelty, it will have its brief day and be thrown aside.

Scholes frequently expressed his dismay in this way, according to IBM history at http://www-03.ibm.com/ibm/history/exhibits/modelb/modelb_informal.html

[In relation to business:] Invention must be its keynote—a steady progression from one thing to another. As each in turn approaches a saturated market, something new must be produced.

[My favourite fellow of the Royal Society is the Reverend Thomas Bayes, an obscure 18th-century Kent clergyman and a brilliant mathematician who] devised a complex equation known as the Bayes theorem, which can be used to work out probability distributions. It had no practical application in his lifetime, but today, thanks to computers, is routinely used in the modelling of climate change, astrophysics and stock-market analysis.