But in nothing are swifts more singular than in their early retreat. They retire, as to the main body of them, by the tenth of August, and sometimes a few days sooner: and every straggler invariably withdraws by the twentieth, while their congeners, all of them, stay till the beginning of October; many of them all through that month, and some occasionally to the beginning of November. This early retreat is mysterious and wonderful, since that time is often the sweetest season in the year. But, what is more extraordinary, they begin to retire still earlier in the most southerly parts of Andalusia, where they can be no ways influenced by any defect of heat; or, as one might suppose, defect of food. Are they regulated in their motions with us by failure of food, or by a propensity to moulting, or by a disposition to rest after so rapid a life, or by what? This is one of those incidents in natural history that not only baffles our searches, but almost eludes our guesses!

Have you ever observed a humming-bird moving about in an aerial dance among the flowersa living prismatic gem that changes its colour with every change of position  its exquisite form, its changeful splendour, its swift motions and intervals of aërial suspension, it is a creature of such fairy-like loveliness as to mock all description.

In Green Mansions: A Romance of the Tropical Forest (1916),

I returned and saw under the sun that the race is not to the swift, nor the battle to the strong, neither yet bread to the wise, nor yet riches to men of understanding, nor yet favour to men of skill; but time and chance happeneth to them all.

Ecclesiastes 9:11. As given in the King James Version. 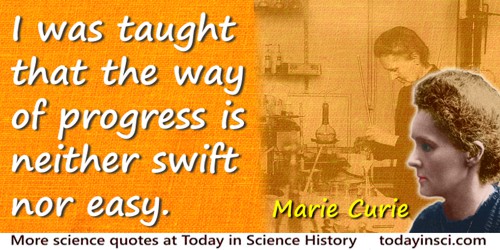 I was taught that the way of progress is neither swift nor easy.

It is said that in a certain grassy part of the world a man will walk a mile to catch a horse, whereon to ride a quarter of a mile to pay an afternoon call. Similarly, it is not quite respectable to arrive at a mathematical destination, under the gaze of a learned society, at the mere footpace of arithmetic. Even at the expense of considerable time and effort, one should be mounted on the swift steed of symbolic analysis.

Opening of 'How to Solve Differential Equations Approximately by Arithmetic', The Mathematical Gazette (Jul 1925), 12, No. 177, 415

Life is short and we have not too much time for gladdening the hearts of those who are traveling the dark way with us. Oh, be swift to love! Make haste to be kind.

Men fear thought as they fear nothing else on earth more than ruin more even than death. Thought is subversive and revolutionary, destructive and terrible, thought is merciless to privilege, established institutions, and comfortable habit. Thought looks into the pit of hell and is not afraid. Thought is great and swift and free, the light of the world, and the chief glory of man.

Nature!  She creates needs because she loves action. Wondrous! that she produces all this action so easily. Every need is a benefit, swiftly satisfied, swiftly renewed.Every fresh want is a new source of pleasure, but she soon reaches an equilibrium.

Our plenteous streams a various race supply,
The bright-eye Perch with fins of Tyrian dye,
The silver Eel, in shining volumes rolld,
The yellow Carp, in scales bedroppd with gold,
Swift Trouts, diversified with crimson stains,
And Pykes, the Tyrants of the watry plains.

See with what force yon rivers crystal stream
Resists the weight of many a massy beam.
To sink the wood the more we vainly toil,
The higher it rebounds, with swift recoil.
Yet that the beam would of itself ascend
No man will rashly venture to contend.
Thus too the flame has weight, though highly rare,
Nor mounts but when compelled by heavier air.

De Rerum Natura, second book, as quoted in translation in Thomas Young, A Course of Lectures on Natural Philosophy and the Mechanical Arts (1845), 12.

Talent, in difficult situations, strives to untie knots, which genius instantly cuts with one swift decision.

The lame (as they say) in the path outstrip the swift who wander from it, and it is clear that the very skill and swiftness of him who runs not in the right direction must increase his aberration.

The lame  in the path outstrip the swift who wander from it.

In Novum Organum, as collected and translated in The Works of Francis Bacon: Lord Chancellor of England (1831), 43.

The swift metamorphosis and the onward march of civilization, sweeping ever westward and transforming and taming our wilderness, fills us with a strange regret, and we rejoice that parts of that wilderness will yet remain to us unchanged