Agriculture not only gives riches to a nation, but the only riches she can call her own.

Be not afeard.
The isle is full of noises,
Sounds, and sweet airs, that give delight and hurt not.
Sometimes a thousand twangling instruments
Will hum about mine ears; and sometime voices
That if I then had waked after long sleep
Will make me sleep again; and then, in dreaming
The clouds methought would open and show riches
Ready to drop upon me, that, when I waked,
I cried to dream again.

I feel, sometimes, as the renaissance man must have felt in finding new riches at every point and in the certainty that unexplored areas of knowledge and experience await at every turn.

I have been branded with folly and madness for attempting what the world calls impossibilities, and even from the great engineer, the late James Watt, who said ... that I deserved hanging for bringing into use the high-pressure engine. This has so far been my reward from the public; but should this be all, I shall be satisfied by the great secret pleasure and laudable pride that I feel in my own breast from having been the instrument of bringing forward new principles and new arrangements of boundless value to my country, and however much I may be straitened in pecuniary circumstances, the great honour of being a useful subject can never be taken from me, which far exceeds riches.

From letter to Davies Gilbert, written a few months before Trevithick's last illness. Quoted in Francis Trevithick, Life of Richard Trevithick: With an Account of his Inventions (1872), Vol. 2, 395-6.

I returned and saw under the sun that the race is not to the swift, nor the battle to the strong, neither yet bread to the wise, nor yet riches to men of understanding, nor yet favour to men of skill; but time and chance happeneth to them all.

Ecclesiastes 9:11. As given in the King James Version. 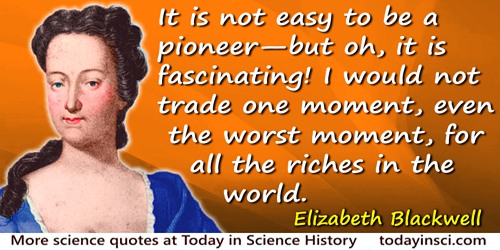 It is not easy to be a pioneerbut oh, it is fascinating! I would not trade one moment, even the worst moment, for all the riches in the world.

As quoted, without citation, in Arlene J. Morris-Lipsman, Notable Women (1990), 70. The author dates this to twenty years after her graduation, [which was on 23 Jan 1849]. Please contact Webmaster if you know the primary source.

From 'Autobiography' translated from the original German by Eliza Buckminster Lee, collected in Life of Jean Paul Frederic Richter (1842), Vol. 1, 20.

Tarshish was thy merchant by reason of the multitude of all kind of riches; with silver, iron, tin and lead, they traded in thy fairs.

The greatest good you can do for another is not just share your riches, but reveal to them their own.

There is nothing wrong with men possessing riches. The wrong comes when riches possess men.

This characteristic of modern experimentsthat they consist principally of measurements,is so prominent, that the opinion seems to have got abroad, that in a few years all the great physical constants will have been approximately estimated, and that the only occupation which will then be left to men of science will be to carry these measurements to another place of decimals  But we have no right to think thus of the unsearchable riches of creation, or of the untried fertility of those fresh minds into which these riches will continue to be poured.

Maxwell strongly disagreed with the prominent opinion, and was attacking it. Thus, he was saying he did not believe in such a future of merely making measurements to another place of decimals. In 'Introductory Lecture on Experimental Physics', (Oct 1871). In W.D. Niven (ed.), The Scientific Papers of James Clerk Maxwell (1890), Vol. 2, 244. Note that his reference to making measurements to another place of decimals is often seen extracted as a short quote without the context showing - obscuring the fact that he actually despised that opinion.

When, to the flame that the natural heat of youth kindles, the oil of riches is added, little more than the ashes of the phoenix remains; and only a Goethe has had the forbearance not to singe his phoenix wings at the sun of Fortune.

From 'Autobiography' translated from the original German by Eliza Buckminster Lee, collected in Life of Jean Paul Frederic Richter (1842), Vol. 1, 20-21.