A doctor can bury his mistakes but an architect can only advise his client to plant vines.

Call Archimedes from his buried tomb
Upon the plain of vanished Syracuse,
And feelingly the sage shall make report
How insecure, how baseless in itself,
Is the philosophy, whose sway depends
On mere material instrumentshow weak
Those arts, and high inventions, if unpropped
By virtue.

Far must thy researches go
Wouldst thou learn the world to know;
Thou must tempt the dark abyss
Wouldst thou prove what Being is;
Naught but firmness gains the prize,
Naught but fullness makes us wise,
Buried deep truth ever lies!

I should rejoice to see  Euclid honourably shelved or buried deeper than did ever plummet sound out of the schoolboys reach; morphology introduced into the elements of algebra; projection, correlation, and motion accepted as aids to geometry; the mind of the student quickened and elevated and his faith awakened by early initiation into the ruling ideas of polarity, continuity, infinity, and familiarization with the doctrines of the imaginary and inconceivable.

From Presidential Address (1869) to the British Association, Exeter, Section A, collected in Collected Mathematical Papers of Lames Joseph Sylvester (1908), Vol. 2, 657. Also in George Edward Martin, The Foundations of Geometry and the Non-Euclidean Plane (1982), 93. [Note: plummet sound refers to ocean depth measurement (sound) from a ship using a line dropped with a weight (plummet). Webmaster]

I would request that my body in death be buried, not cremated so that the energy content contained within in gets returned to the earth, so that flora and fauna can dine upon it just as Ive dined upon flora and fauna throughout my life. 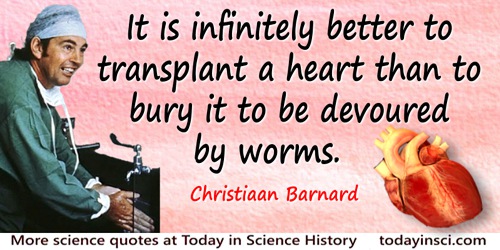 It is infinitely better to transplant a heart than to bury it to be devoured by worms.

J. J. Sylvester was an enthusiastic supporter of reform [in the teaching of geometry]. The difference in attitude on this question between the two foremost British mathematicians, J. J. Sylvester, the algebraist, and Arthur Cayley, the algebraist and geometer, was grotesque. Sylvester wished to bury Euclid deeper than eer plummet sounded out of the schoolboys reach; Cayley, an ardent admirer of Euclid, desired the retention of Simsons Euclid. When reminded that this treatise was a mixture of Euclid and Simson, Cayley suggested striking out Simsons additions and keeping strictly to the original treatise.

No catastrophe has ever yielded so much pleasure to the rest of humanity as that which buried Pompeii and Herculaneum.

Nobody ever forgets where he buried the hatchet.

Unverified. Need primary source. Can you help? Widely seem, but without citation, for example, in Jon, Michael and Deborah Fripp, Speaking of Science (2000), 203.

Objective conscience is the function of a normal being; the representative of God in the essence. Buried so deeply that it remains relatively indestructible.

Peace cannot be obtained by wishing for it. We live in the same world with Russia, whose leader has said he wants to bury usand he means it. Disarmament, the cessation of tests, will not automatically bring us closer to peace.

From 'Autobiography' translated from the original German by Eliza Buckminster Lee, collected in Life of Jean Paul Frederic Richter (1842), Vol. 1, 20.

The fear of meeting the opposition of envy, or the illiberality of ignorance is, no doubt, the frequent cause of preventing many ingenious men from ushering opinions into the world which deviate from common practice. Hence for want of energy, the young idea is shackled with timidity and a useful thought is buried in the impenetrable gloom of eternal oblivion.

A Treatise on the Improvement of Canal Navigation (1796), preface, ix.

We seem to have a compulsion these days to bury time capsules in order to give those people living in the next century or so some idea of what we are like.