A story about the Jack Spratts of medicine [was] told recently by Dr. Charles H. Best, co-discoverer of insulin. He had been invited to a conference of heart specialists in North America. On the eve of the meeting, out of respect for the fat-clogs-the-arteries theory, the delegates sat down to a special banquet served without fats. It was unpalatable but they all ate it as a duty. Next morning Best looked round the breakfast room and saw these same specialists—all in the 40-60 year old, coronary age group—happily tucking into eggs, bacon, buttered toast and coffee with cream.

As an adolescent I aspired to lasting fame, I craved factual certainty, and I thirsted for a meaningful vision of human lifeso I became a scientist. This is like becoming an archbishop so you can meet girls.

I kind of like scientists, in a funny way.  I'm kind of interested in genetics though. I think I would have liked to have met Gregor Mendel. Because he was a monk who just sort of figured this stuff out on his own. That's a higher mind, thats a mind that's connected.  But I would like to know about Mendel, because I remember going to the Philippines and thinking this is like Mendels garden because it had been invaded by so many different countries over the years, and you could see the children shared the genetic traits of all their invaders over the years, and it made for this beautiful varietal garden.

Answering question: If you could go back in time and have a conversation with one person, who would it be and why? by Anniedog03 during an Internet Reddit AMA (Ask Me Anything) online session (17 Jan 2014).

I learnt very quickly that the only reason that would be accepted for not attending a committee meeting was that one already had a previous commitment to attend a meeting of another organization on the same day. I therefore invented a society, the Orion Society, a highly secret and very exclusive society that spawned a multitude of committees, sub-committees, working parties, evaluation groups and so on that, regrettably, had a prior claim on my attention. Soon people wanted to know more about this club and some even decided that they would like to join it. However, it was always made clear to them that applications were never entertained and that if they were deemed to qualify for membership they would be discreetly approached at the appropriate time.

It is not so long since, during one of the meetings of the Association, one of the leading English newspapers briefly described a sitting of this Section in the words, Saturday morning was devoted to pure mathematics, and so there was nothing of any general interest: still, such toleration is better than undisguised and ill-informed hostility.

In Report of the 67th meeting of the British Association for the Advancement of Science.

Mathematicians attach great importance to the elegance of their methods and their results. This is not pure dilettantism. What is it indeed that gives us the feeling of elegance in a solution, in a demonstration? It is the harmony of the diverse parts, their symmetry, their happy balance; in a word it is all that introduces order, all that gives unity, that permits us to see clearly and to comprehend at once both the ensemble and the details. But this is exactly what yields great results, in fact the more we see this aggregate clearly and at a single glance, the better we perceive its analogies with other neighboring objects, consequently the more chances we have of divining the possible generalizations. Elegance may produce the feeling of the unforeseen by the unexpected meeting of objects we are not accustomed to bring together; there again it is fruitful, since it thus unveils for us kinships before unrecognized. It is fruitful even when it results only from the contrast between the simplicity of the means and the complexity of the problem set; it makes us then think of the reason for this contrast and very often makes us see that chance is not the reason; that it is to be found in some unexpected law. In a word, the feeling of mathematical elegance is only the satisfaction due to any adaptation of the solution to the needs of our mind, and it is because of this very adaptation that this solution can be for us an instrument. Consequently this esthetic satisfaction is bound up with the economy of thought.

In 'The Future of Mathematics', Monist, 20, 80. Translated from the French by George Bruce Halsted.

Not every collision,
not every punctilious trajectory
by which billiard-ball complexes
arrive at their calculable meeting places
lead to reaction. ...
Men (and women) are not
as different from molecules
as they think.

Hoffmann, as a chemist-turned-poet is making the analogy of random intermolecular interactions to those of humans. From poem, 'Men and Molecules', The Metamict State (1984), 43. Cited as an epigraph in William L. Masterton and Cecile N. Hurley Chemistry: Principles and Reactions, Updated Edition (2005), 282.

People of the same trade seldom meet together, even for merriment and diversion, but the conversation ends in a conspiracy against the public, or in some contrivance to raise prices. It is impossible indeed to prevent such meetings, by any law which either could be executed, or would be consistent with liberty and justice.

Rome did not create a great empire by having meetings. They did it by killing all those who opposed them.

The discovery of natural law is a meeting with God. 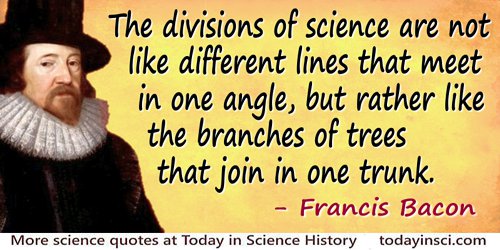 The divisions of science are not like different lines that meet in one angle, but rather like the branches of trees that join in one trunk.

The fear of meeting the opposition of envy, or the illiberality of ignorance is, no doubt, the frequent cause of preventing many ingenious men from ushering opinions into the world which deviate from common practice. Hence for want of energy, the young idea is shackled with timidity and a useful thought is buried in the impenetrable gloom of eternal oblivion.

A Treatise on the Improvement of Canal Navigation (1796), preface, ix.

The social system that is necessary for learning and transmission of culture depends upon properties of the brain and endocrine system that reduce aggression, impose restraint and allow cooperation. Five hundred apes would not sit quietly and listen to another ape like the audience at this meeting.

From introductory remarks when opening a joint meeting of the British Academy and the Royal Society at the Wellcome Institute. Printed in 'The Emergence of Man', Philosophical Transactions of the Royal Society of London, Series B, Biological Sciences (May 8, 1981), 292, No. 1057, 5.

There may be some interest in one of my own discoveries in physics, entitled, A Method of Approximating the Importance of a Given Physicist. Briefly stated, after elimination of all differentials, the importance of a physicist can be measured by observation in the lobby of a building where the American Physical Society is in session. The importance of a given physicist varies inversely with his mean free path as he moves from the door of the meeting-room toward the street. His progress, of course, is marked by a series of scattering collisions with other physicists, during which he remains successively in the orbit of other individuals for a finite length of time. A good physicist has a mean free path of 3.6 ± 0.3 meters. The shortest m.f.p. measured in a series of observations between 1445 and 1947 was that of Oppenheimer (New York, 1946), the figure being 2.7 centimeters. I know. I was waiting for him on the street.

When we meet a fact which contradicts a prevailing theory, we must accept the fact and abandon the theory, even when the theory is supported by great names and generally accepted.

From An Introduction to the Study of Experimental Medicine (1865), as translated by Henry Copley Greene (reprint 1999), 164.

[E.H.] Moore was presenting a paper on a highly technical topic to a large gathering of faculty and graduate students from all parts of the country. When half way through he discovered what seemed to be an error (though probably no one else in the room observed it). He stopped and re-examined the doubtful step for several minutes and then, convinced of the error, he abruptly dismissed the meetingto the astonishment of most of the audience. It was an evidence of intellectual courage as well as honesty and doubtless won for him the supreme admiration of every person in the groupan admiration which was in no wise diminished, but rather increased, when at a later meeting he announced that after all he had been able to prove the step to be correct.

[I] browsed far outside science in my reading and attended public lectures - Bertrand Russell, H. G. Wells, Huxley, and Shaw being my favorite speakers. (The last, in a meeting at King's College, converted me to vegetarianism - for most of two years!).

Autobiography collected in Gardner Lindzey (ed.), A History of Psychology in Autobiography (1973), Vol. 6, 64.