I believe that the human mind, or even the mind of a cat, is more interesting in its complexity than an entire galaxy if it is devoid of life.

I shall devote all my efforts to bring light into the immense obscurity that today reigns in Analysis. It so lacks any plan or system, that one is really astonished that so many people devote themselves to itâ€”and, still worse, it is absolutely devoid of any rigour.

If a person cannot love a plant after he has pruned it, then he has either done a poor job or is devoid of emotion.

It [mathematics] is in the inner world of pure thought, where all entia dwell, where is every type of order and manner of correlation and variety of relationship, it is in this infinite ensemble of eternal verities whence, if there be one cosmos or many of them, each derives its character and mode of being,â€”it is there that the spirit of mathesis has its home and its life.
Is it a restricted home, a narrow life, static and cold and grey with logic, without artistic interest, devoid of emotion and mood and sentiment? That world, it is true, is not a world of solar light, not clad in the colours that liven and glorify the things of sense, but it is an illuminated world, and over it all and everywhere throughout are hues and tints transcending sense, painted there by radiant pencils of psychic light, the light in which it lies. It is a silent world, and, nevertheless, in respect to the highest principle of artâ€”the interpenetration of content and form, the perfect fusion of mode and meaningâ€”it even surpasses music. In a sense, it is a static world, but so, too, are the worlds of the sculptor and the architect. The figures, however, which reason constructs and the mathematic vision beholds, transcend the temple and the statue, alike in simplicity and in intricacy, in delicacy and in grace, in symmetry and in poise. Not only are this home and this life thus rich in aesthetic interests, really controlled and sustained by motives of a sublimed and supersensuous art, but the religious aspiration, too, finds there, especially in the beautiful doctrine of invariants, the most perfect symbols of what it seeksâ€”the changeless in the midst of change, abiding things hi a world of flux, configurations that remain the same despite the swirl and stress of countless hosts of curious transformations. 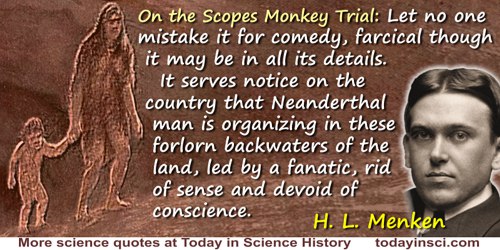 Let no one mistake it for comedy, farcical though it may be in all its details. It serves notice on the country that Neanderthal man is organizing in these forlorn backwaters of the land, led by a fanatic, rid of sense and devoid of conscience.
[Commenting on the Scopes Monkey Trial, while reporting for the Baltimore Sun.]

Of all the constituents of the human body, bone is the hardest, the driest, the earthiest, and the coldest; and, excepting only the teeth, it is devoid of sensation. God, the great Creator of all things, formed its substance to this specification with good reason, intending it to be like a foundation for the whole body; for in the fabric of the human body bones perform the same function as do walls and beams in houses, poles in tents, and keels and ribs in boats.
Bones Differentiated by Function
Some bones, by reason of their strength, form as it were props for the body; these include the tibia, the femur, the spinal vertebrae, and most of the bony framework. Others are like bastions, defense walls, and ramparts, affording natural protection to other parts; examples are the skull, the spines and transverse processes of the vertebrae, the breast bone, the ribs. Others stand in front of the joints between certain bones, to ensure that the joint does not move too loosely or bend to too acute an angle. This is the function of the tiny bones, likened by the professors of anatomy to the size of a sesame seed, which are attached to the second internode of the thumb, the first internode of the other four fingers and the first internodes of the five toes. The teeth, on the other hand, serve specifically to cut, crush, pound and grind our food, and similarly the two ossicles in the organ of hearing perform a specifically auditory function.

From De Humani Corporis Fabrica Libri Septem: (1543), Book I, 1, as translated by William Frank Richardson, in 'Nature of Bone; Function of Bones', On The Fabric of the Human Body: Book I: The Bones and Cartilages (1998), 1.

Our most distinguished â€śman of scienceâ€ť was the then veteran John Dalton. He was rarely absent from his seat in a warm corner of the room during the meetings of the Literary and Philosophical Society. Though a sober-minded Quaker, he was not devoid of some sense of fun; and there was a tradition amongst us, not only that he had once been a poet, but that, although a bachelor, two manuscript copies were still extant of his verses on the subject of matrimonial felicity; and it is my belief there was foundation for the tradition. The old man was sensitive on the subject of his age. Dining one day ... he was placed between two ladies ... [who] resolved to extract from him some admission on the tender point, but in vain. Though never other than courteous, Dalton foiled all their feminine arts and retained his secret. ... Dalton's quaint and diminutive figure was a strongly individualized one.

Science is vastly more stimulating to the imagination than are the classics, but the products of this stimulus do not normally see the light because scientific men as a class are devoid of any perception of literary form.

Taking â€¦ the mathematical faculty, probably fewer than one in a hundred really possess it, the great bulk of the population having no natural ability for the study, or feeling the slightest interest in it*. And if we attempt to measure the amount of variation in the faculty itself between a first-class mathematician and the ordinary run of people who find any kind of calculation confusing and altogether devoid of interest, it is probable that the former could not be estimated at less than a hundred times the latter, and perhaps a thousand times would more nearly measure the difference between them.
[* This is the estimate furnished me by two mathematical masters in one of our great public schools of the proportion of boys who have any special taste or capacity for mathematical studies. Many more, of course, can be drilled into a fair knowledge of elementary mathematics, but only this small proportion possess the natural faculty which renders it possible for them ever to rank high as mathematicians, to take any pleasure in it, or to do any original mathematical work.]

The real value of science is in the getting, and those who have tasted the pleasure of discovery alone know what science is. A problem solved is dead. A world without problems to be solved would be devoid of science.

To those devoid of imagination a blank place on the map is a useless waste; to others, the most valuable part.